A tropical disturbance in the Caribbean Sea has been labeled as a tropical rainstorm by AccuWeather meteorologists, who say this fledgling system could become the next tropical storm or hurricane of the 2022 Atlantic hurricane season in the coming days.

Even though AccuWeather forecasters maintain that the system is highly unlikely to make a northward turn toward the United States this weekend, cruise ship operators and vacationers in the path of the storm through the southern Caribbean should be prepared for altered plans or adverse weather conditions. 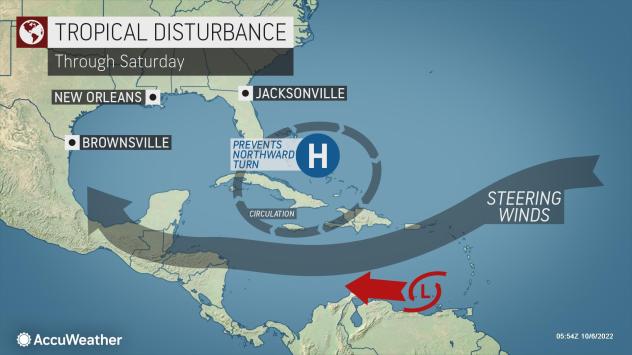 The National Hurricane Center (NHC) designated this rainstorm as Potential Tropical Cyclone 13 Thursday morning, one day after an Air Force reconnaissance mission was conducted to investigate the storm.

While it still has some atmospheric hurdles to overcome, the concern is growing for the rainstorm to strengthen into a bigger, more threatening system in the southwestern Caribbean by this weekend.

The tropical rainstorm caused flooding problems on the islands of Trinidad and Tobago on Wednesday. The Trinidad and Tobago meteorological service issued an adverse weather alert. Video shared to Twitter showed cars driving through floodwaters and rivers overflowing their banks. 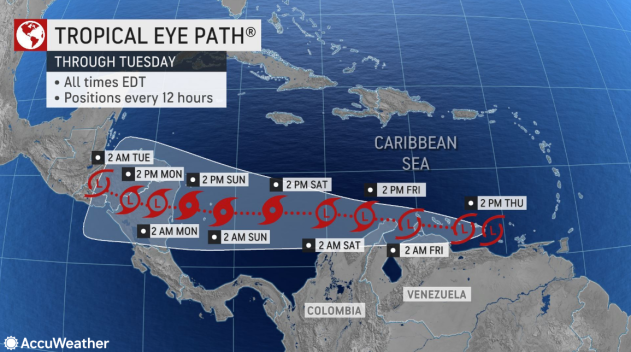 A belt of high pressure and strong wind shear will hold across the northern islands of the Caribbean through this week and into this weekend. When wind shear is strong, it can inhibit tropical development. These factors will keep the rather weak rainstorm moving along at a steady westward pace and should prevent a northward track to the northern Caribbean and the U.S.

People in Central America should closely monitor the storm, forecasters say, as there is the potential for direct impact by a strengthening tropical storm or hurricane this weekend and into early next week.

The center of the rainstorm remained poorly defined on Thursday as it scraped along the northern coast of South America with torrential downpours and strong thunderstorms extending across the northern parts of Venezuela and Colombia. 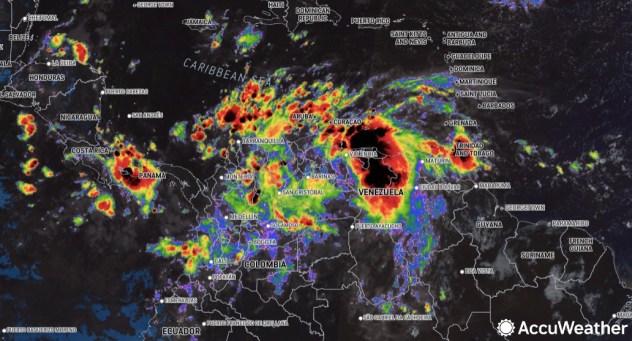 "Proximity to the coast of South America as well as strong wind shear is likely to limit the intensity and perhaps prevent the organization of the system as it moves westward over the southern Caribbean into Friday," AccuWeather Senior Meteorologist Adam Douty said. "For the system to organize through Friday, a cluster of intense thunderstorms would have to form offshore and persist long enough to develop a low pressure area and circulation."

Parts of the Caribbean from the Windward Islands to the ABC Islands and the northern shoreline of South America can expect stormy conditions that will shift from west to east over the remainder of the week.

In these southeastern and south-central Caribbean areas, downpours can be intense enough to lead to flash flooding. Hilly terrain could be subject to mudslides and other debris flows. Winds in the strongest thunderstorms could lead to sporadic power outages, while the surf may become too rough for swimmers and seas could become dangerous to small craft operators. 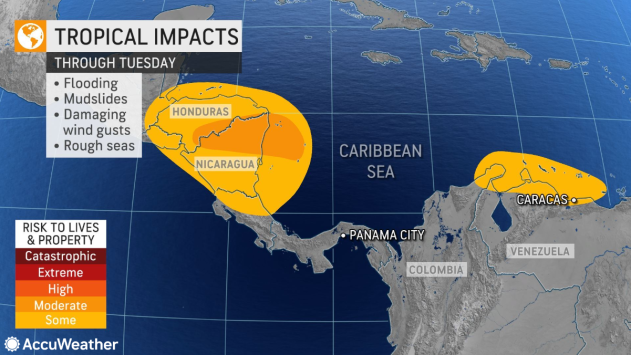 "As the storm moves into more open and bathlike [warm] waters of the southwestern Caribbean this weekend, there is the likelihood for strengthening with the chance of rapid intensification," Douty said. During the weekend, wind shear may drop off or the system could become better organized regardless of the hostile wind conditions.

Steering breezes are most likely to continue to guide the storm on a west or west-northwest track while in the western Caribbean. For this reason, all areas from Panama to Belize and southeastern Mexico are being put on heightened alert and people should monitor the storm’s progress, AccuWeather forecasters say.

A strengthening tropical storm or hurricane will carry the risk of flooding rainfall, mudslides in hilly terrain and damaging winds and dangerous storm surge along the coast near and well north of the center in Central America. The location where the storm forms and the timing of development will both be determining factors as to the exact locations in Central America that will suffer the worst impacts. 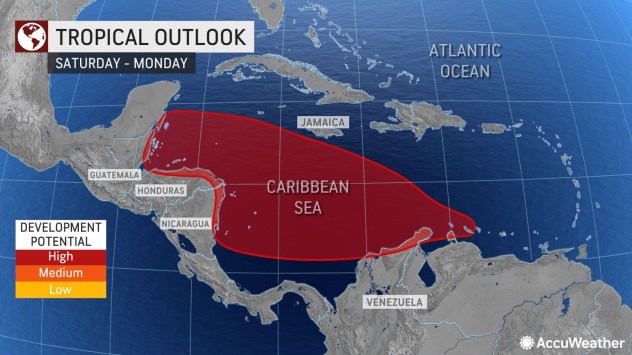 There is some uncertainty about which name the storm could be given in the Atlantic as another system near the Cabo Verde Islands in the eastern Atlantic was dubbed Tropical Depression Twelve by the National Hurricane Center late Tuesday. As of Thursday morning, the system was about 635 miles (1,025 km) west-northwest of the Cabo Verde Islands, with maximum sustained winds of 35 mph.

That system, which could become a tropical storm at any time over the next couple of days, is not a threat to land. The next two names on the list forecasters use to identify tropical storms in the Atlantic for the 2022 season are Julia and Karl.

Thousands of miles farther to the north, a nor'easter with some of Ian's old energy continued to spin off the mid-Atlantic coast of the U.S. Wednesday. Even though this system had an eyelike structure near the center, it was in a zone too hostile for tropical development and was already at its peak intensity. 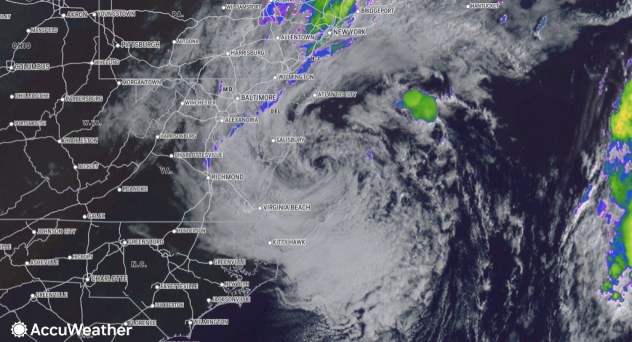 This image of the mid-Atlantic nor'easter was captured on Wednesday, Oct. 5, 2022. An eye was visible near the storm's center. (AccuWeather Enhanced RealVue™ satellite)

Should the Caribbean storm survive a westward trip across Central America early next week, it could emerge in the eastern Pacific and retain the same name. Bonnie did just that back in July, and it went on to become a major hurricane over the eastern Pacific.

In November 2020, parts of Central America were devastated in the span of two weeks by two Category 4 hurricanes. The first was Hurricane Eta, which ravaged parts of Nicaragua and Honduras in the early part of the month. Just two weeks later, Hurricane Iota made landfall in Nicaragua very close to where Eta had crashed ashore. 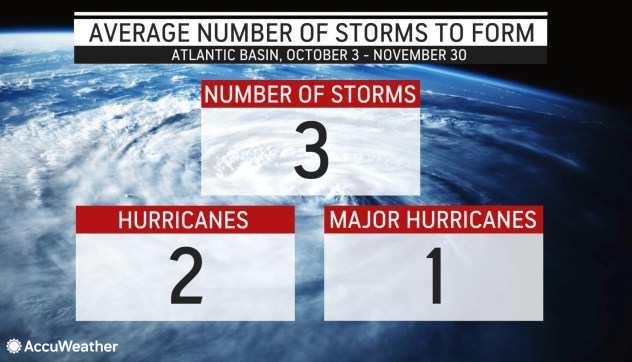 Through Wednesday, Oct. 6, 2022, there have been nine tropical storms and five hurricanes this season. Of these, Hurricanes Fiona and Ian reached major intensity and peaked at Category 4 strength (130-156 mph).

Fiona slammed into Puerto Rico, the Dominican Republic and Atlantic Canada, while Ian blasted across Cuba before devastating the Florida Peninsula and later hitting South Carolina.

During an average hurricane season, from Oct. 3 through the end of November, there are typically three more named storms, of which two are hurricanes and one that can become a Category 3 major hurricane (111-129 mph or stronger).