The gaping chasm is more than 1,000 feet long and 600-plus feet deep. Cave explorers rappelled to the bottom, and what they found there was alive.

They say it may even harbor yet-to-be-discovered species.

When we think of sinkholes, images of deep-pitted wells of buckling and sunken asphalt come to mind as they swallow up chunks of earth and everything with it.

Gaping large and dramatic enough, they often draw the curious onlookers eager for a peek at what might be lurking far below the surface.

But peering into one recently discovered sinkhole in the hilly outlying regions of southern China, one finds a lush forest down below with ancient towering trees. It's a place they call "tiankeng" in Mandarin, meaning "heavenly pit."

The gaping hole, measuring 1,003 feet (306 meters) long and 492 feet (150 meters) wide, was discovered by cave explorers on May 6 in China’s Guangxi Zhuang Autonomous Region, near Ping'e village in the county of Leye. What made it all the more mysterious were the three smaller cave entrances an expedition team stumbled upon once inside the 623-foot-deep cavernous pit.

The group of cave scientists and explorers -- called “speleologists” and “spelunkers” -- rappelled down to the bottom of this enormous chasm to document the flora and other life that has flourished and taken hold in the space as the sinkhole’s opening slowly grew larger and larger “over millennia,” according to experts.

Chen Lixin, who led the cave expedition team, described the plentiful and ancient, 140-foot-tall trees growing at the bottom with their branches stretched out toward the sunlight and the dense undergrowth on the sinkhole floor that is as high as a person's shoulders.

Scientists believe the subterranean habitat may even harbor some still unknown species.

"I wouldn't be surprised to know that there are species found in these caves that have never been reported or described by science until now," George Veni, executive director of the National Cave and Karst Research Institute in New Mexico, told AccuWeather.

Such unknowns are what lend to their mysterious nature.

“You don’t know what you’re going to find in each corner, and sometimes we are surprised and occasionally something breaks through our own expectations,” he added.

For scientists and researchers who devote their lives to studying sinkholes and caves, Veni said, “they inspire us and challenge us to learn and explore more.”

“It’s interesting that we’ve gone from living in caves to now studying and exploring them,” Veni mused.

Sinkholes and caves are rather common in the southern parts of China due to the vast karst topography throughout the region. 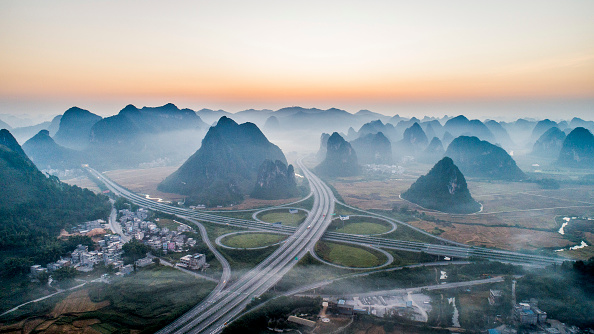 An aerial view of an expressway interchange between misty hills of the karst landform in Jingxi city in south China's Guangxi Zhuang Autonomous Region on Oct. 06, 2021. (Feature China/Future Publishing via Getty Images)

In fact, these towering karst formations, which range from sinkholes to rock pillars to natural bridges, have earned the region a UNESCO world heritage site designation that protects the area.

“The geologic conditions are just right in China” to create such wonders of the Earth, said Veni.

"In China, you have this incredibly visually spectacular karst with enormous sinkholes and giant cave entrances and so forth," Veni added.

This most recent find is the 30th sinkhole to have been discovered in this region of China, according to the Chinese state-run news agency Xinhua. The country also holds the honor of being home to the largest sinkhole. Located in Xiaozhai Tiankeng, the sinkhole there is 2,100 feet deep, 2,000 feet long and 1,760 feet wide and includes a waterfall within its depths.

About 25% of the United States, he noted, contains karst caves and sinkholes, “but they’re not as dramatic.”

“Sinkholes might be quite subdued, only a meter or two in diameter. Cave entrances might be very small, so you have to squeeze your way into them."

And the karst isn’t just pretty spectacular to look at. It provides a basic necessity for millions of people worldwide. Veni said about 700 million people depend on karst aquifers as their primary or sole water source.

2021-22 marked the first-ever International Year of Caves and Karst that has featured 500 events around the world.

'Well of Hell,' gaping desert hole, is shrouded in mystery
Man stumbled upon incredible discovery in this opening of a cliff
Video shows tanker nearly swallowed up by monstrous waves in North Atlantic