The frightening scene looked like one right out of the movie 'The Perfect Storm' -- and the sound captured in the footage only magnified the harrowing experience.

A sailor watched on anxiously while recording his ship battle monster waves in the northern Atlantic Ocean on April 29.

The North Atlantic is not a welcoming place for seafarers. The massive body of water is notorious for brutal weather that can create dangerous shipping conditions over hundreds if not thousands of miles.

On April 29, a tanker was caught up in extremely turbulent weather and one of the crew members recorded video of the frightening scene. As the ship was crossing the North Atlantic, it was struck by a series of large waves in what looked like a scene straight out of the 2000 film The Perfect Storm. 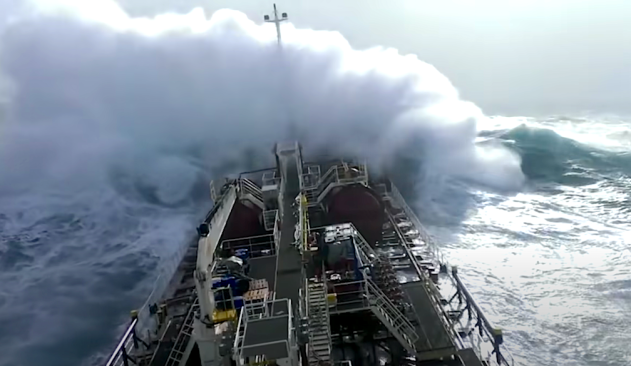 Footage captured by one of the sailors on board showed the ship bobbing up and down amid the angry ocean as ferocious waves pounded the ship repeatedly and gusty winds howled.

"As storm systems strengthen across the North Atlantic wind gusts can reach or even surpass hurricane-force (74 mph or 119 km/h), which work to kick up very large swells," said AccuWeather Senior Meteorologist Tyler Roys.

Waves can build to more than 50 feet (15 meters) across the open expanse of ocean stretching from eastern Canada to western Europe.

"These swells can propagate away from the storm hundreds of miles," Roys added.

That wave, however, pales in comparison to a 76-foot (23.4-meter) wave measured by a buoy in 2014, according to a BBC report. The WMO noted that this wave was not measured using "significant wave height," which required certain measuring methods and observing periods.

The world record for highest significant wave height by ship observation is also from the North Atlantic. On Feb. 8, 2000, a wave of 60.7 feet (18.5 meters) was recorded.

Advanced technology has allowed scientists to get even closer to nature and capture never-before-seen video footage. In September 2021, a drone ship -- the Saildrone Explorer SD 1045 -- was able to capture, for the first time, footage from the eye of Hurricane Sam, a Category 4 storm in the Atlantic Ocean.

Yet another round of flooding storms en route for Northwest