For the first time in history, an ocean drone recorded video within a Category 4 hurricane on Sept. 30, going "where no research vessel has ever ventured."

A drone ship operated by Saildrone Inc. and the National Oceanic and Atmospheric Administration (NOAA) has gone "where no research vessel has ever ventured" to capture footage from the eye of Hurricane Sam. According to Saildrone founder and CEO Richard Jenkins, the achievement will change scientists' understanding of hurricanes as we know it.

"This is an amazing victory for meteorology and will increase our knowledge of hurricanes," AccuWeather Director of Forecast Operations Dan DePodwin said of the groundbreaking mission. He was not involved with the operation.

The first videos from the un-crewed surface vehicle, called the Saildrone Explorer SD 1045, were released on Sept. 30.

A brief video from a sailing drone inside Hurricane Sam's eye on Sept. 30, 2021 (Saildrone)

According to AccuWeather Senior Weather Editor Jesse Ferrell, NOAA scientists were able to send the saildrone straight into the eye of the storm, where they were then able to record wind gusts reaching 91 mph and waves reaching 42 feet in height. 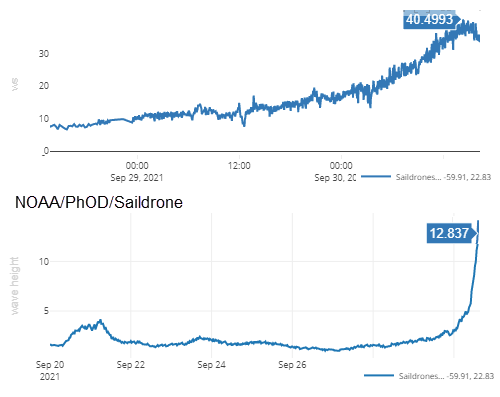 Hurricane Sam also passed over a NOAA buoy on Wednesday night as it made its way through the Atlantic Ocean. The buoy was able to record waves almost 40 feet tall and wind gusts peaking at 98 mph.

"Buoys are hundreds of miles apart in the open ocean. That was just chance," said Ferrell. "Now imagine being able to have a mobile buoy that you can place in front, or drive into, the storm. That's what NOAA and Saildrone did today."

SD 1045 is one of five drone ships that have been gathering information on hurricanes throughout the Atlantic during the 2021 hurricane season, according to a press release from Saildrone. 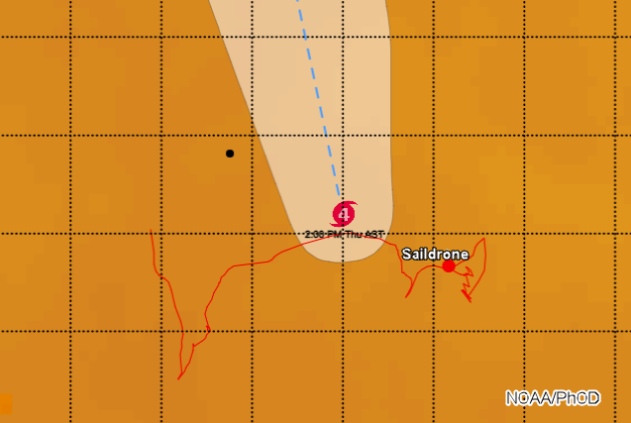 “Saildrone is going where no research vessel has ever ventured, sailing right into the eye of the hurricane, gathering data that will transform our understanding of these powerful storms,” Jenkins said. “After conquering the Arctic and the Southern Ocean, hurricanes were the last frontier for Saildrone survivability. We are proud to have engineered a vehicle capable of operating in the most extreme weather conditions on earth.”

The data retrieved from SD 1045's mission was sent directly to the NOAA’s Pacific Marine Environmental Laboratory (PMEL) and Atlantic Oceanographic and Meteorological Laboratory (AOML). The data will provide vital information to the NOAA regarding hurricane intensification.

“Using data collected by saildrones, we expect to improve forecast models that predict rapid intensification of hurricanes,” NOAA Oceanographer Greg Foltz said. “Rapid intensification, when hurricane winds strengthen in a matter of hours, is a serious threat to coastal communities. New data from drone ships and other un-crewed systems that NOAA is using will help us better predict the forces that drive hurricanes and be able to warn communities earlier.”

According to DePodwin, ships and other vessels typically avoid coming into contact with hurricanes due to the dangerous nature of the storms that could easily lead to a sunken or damaged ship.

SD 1045 was successfully able to enter the eye of Hurricane Sam because its design was created with the intention of traveling through these dangerous waters, reducing the risks significantly. The drone was built with a "hurricane wing" specifically for the purpose of operating through harsh hurricane conditions, such as extreme winds.

"Just like flying planes into hurricanes revolutionized how we track storms, the use of a drone ship will unlock things we never knew about the conditions on and near the surface of the ocean in the middle of a storm," DePodwin said. "One can envision a future where both planes and drone ships complement each other in understanding the science of the inner workings of a hurricane."