Weather forecasting back then wasn't what it is today, which led to many being caught off-guard by the storm. In addition, hurricanes weren't named at the time, so this one was given an ominous nickname afterward. 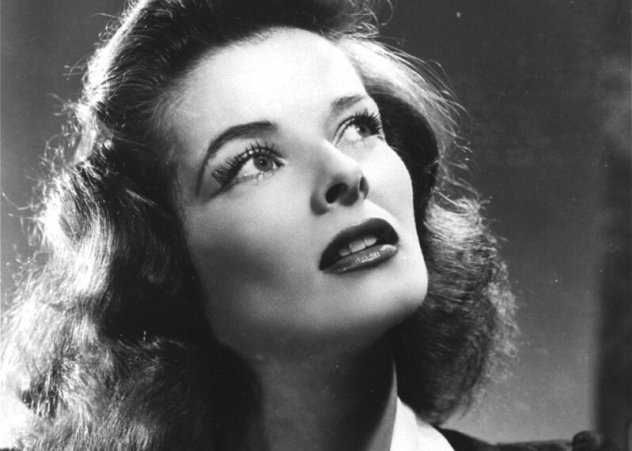 Hollywood legend Katharine Hepburn, seen here in a still from the 1940 film 'The Philadelphia Story,' had a brush with death in 1938 when a powerful unnamed hurricane slammed parts of Long Island, New York, as well as parts of Connecticut and Rhode Island. The storm became known as the Long Island Express. (AP Photo )

Tensions were mounting in Europe as Nazi Germany eyed the Sudetenland, persecution of the Jews in Germany was escalating, and the Spanish government was nearing the brink of collapse amid the Spanish Civil War.

In the U.S., a 450-tonne meteorite -- weighing roughly three times as heavy as The Statue of Liberty without its base -- exploded in the skies near Chicora, Pennsylvania, the Food, Drug and Cosmetic Act was signed into law and U.S. President Franklin D. Roosevelt announced the nation would remain neutral in the event of German aggression toward Czechoslovakia.

And in the Atlantic basin, a hurricane originally thought to have been setting course for Florida instead veered northward to make a rare landfall and nearly claimed the life of an iconic Hollywood actress. 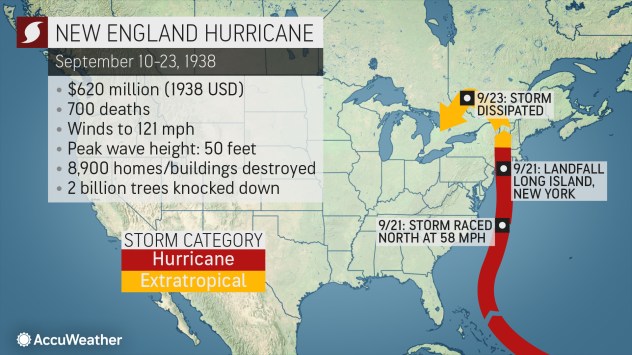 With no radar, weather buoys or satellite imagery, forecasters relied on ships at sea to provide reports, and in mid-September a Brazilian freighter alerted the U.S. Weather Bureau -- the predecessor of the National Weather Service -- of the storm, which at that point was churning northeast of Puerto Rico.

"Back in those days, there were many active shipping lanes off the East Coast and through the Caribbean," AccuWeather Senior Meteorologist Brett Anderson said. "They knew there was a hurricane east of the Bahamas, but they underestimated the storm's strength and especially the forward speed. This hurricane rapidly accelerated to the north at 50 mph, which was rare. "

Florida residents braced for impact, with most forecasts pointing to southeastern Florida as the point of landfall. The New York Times reported that waterfront properties had battened down, public buildings were readied to serve as shelters, and properties were boarded up to protect against debris.

But no storm arrived.

"Hurricane Veering From Florida; May Keep on Its Course Out to Sea," read one Associated Press headline, printed in The New York Times, on Sept. 20 -- the day before the storm was expected to make landfall over Florida. 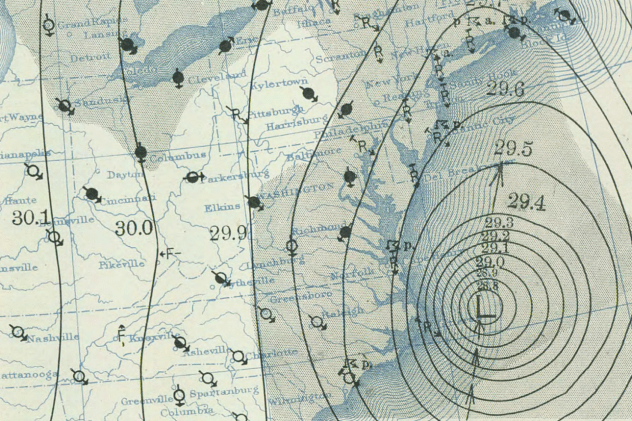 "The tropical storm will be attended by rain in New England and portions of New York and the Middle Atlantic States tonight," read the Weather Bureau forecast on the morning of Sept. 21, 1938. (NOAA)

Instead, the Category 3 hurricane skirted up the Eastern Seaboard and slammed into Long Island before making a second landfall over Milford, Connecticut.

"The storm struck without warning," AccuWeather Chief Meteorologist Jonathan Porter said. His grandfather, Sebastian Cerrato, had grown up in New London, Connecticut, and Porter recalled him speaking in detail and with strong emotions about how terrifying the experience had been. "He always commented about how quickly the damaging winds increased, people were caught off guard as they were coming home from work or school, with trees falling all around them."

Up to 700 people were estimated to have died as a result of the storm.

"Due to the rapid forward speed, this hurricane ended up impacting the Northeast much earlier than expected, catching almost everyone off guard," Anderson said.

A significant dip in the jet stream over the Ohio Valley turned the steering winds, which had previously been from southwest to a northeast direction and away from the U.S. to a south to north direction, sending the storm into Long Island, he explained.

"Clearly [there was] a lack of storm data since it was out over the open ocean and poor communication was key in this case," Anderson said.

At a forward speed of 47 mph, the hurricane hit hard and fast with maximum sustained winds of 120 mph, which produced monstrous waves and 3 to 7 inches of rainfall, according to National Weather Service records.

Blue Hill Observatory in Massachusetts recorded a max wind gust of 186 mph, and across the Northeast, the hurricane's punishing winds destroyed approximately 2 billion trees, according to the NWS.

In Old Saybrook, Connecticut, a then 31-year-old actress Katharine Hepburn, her mother and their maid took cover in the family's Fenwick vacation home as strong winds and a dark sky heralded the oncoming storm. A severe storm watch had been issued, but it had made no mention of the approaching hurricane, according to the biography Katharine Hepburn: A Remarkable Woman.

The cottage was nestled on an open promontory between the Long Island Sound and the Connecticut River, which proved to be disastrous as water levels began to rise. The three made a break for a neighbor's home before the cottage was swept away.

With power and phone lines down, Hepburn fought her way through the raging wind and rain to the town's main street and the nearest working phone to tell her father what had become of the house.

"It was something devastating -- and unreal -- like the beginning of the end of the world -- or the end of it -- and I slogged and sloshed, crawled through ditches and hung on to keep going somehow -- got drenched and bruised and scratched -- completely bedraggled -- finally got to where there was a working phone and called Dad," Hepburn, who died in 2003, recounted.

Less than 50 miles southwest of Old Saybrook, some 50 oceanfront homes at Westhampton Beach, Long Island, were reportedly swept into the ocean, according to The New York Times. Eight bodies were recovered that night, and another 60 people had been reported missing. According to the paper, family members of then-Supreme Court Justice John h. McCooey Jr. and former District Attorney Thomas C.T. Crain were among those rescued.

The high waters temporarily turned the hamlet of Montauk, New York, into an island, and water rose 7 inches within 30 minutes in New York Harbor, according to the NWS. 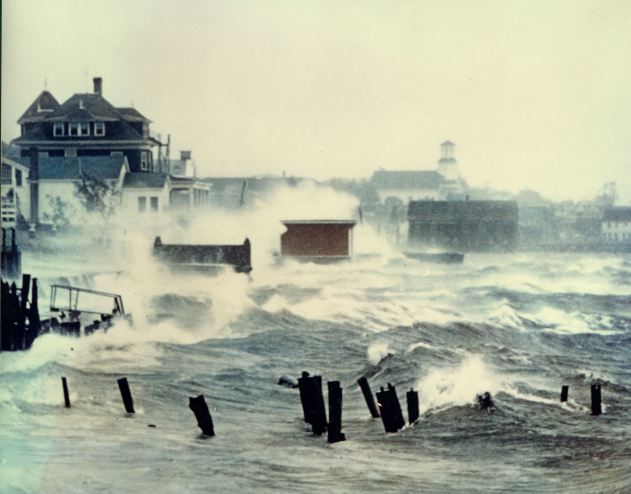 Amid headlines surrounding Czechoslovakia's imminent loss of the Sudetenland to Germany, articles of the hurricane sweeping up the coast and flooding New England filled the front page of the Sept. 22, 1938, edition of The New York Times.

"New England and Eastern Long Island felt the complete fury of the storm," read one article. "New London, Conn., was in darkness last night from the failure of its electric light system; a serious fire which had destroyed an entire block in Bank Street was still raging, and National Guardsmen were patrolling the streets."

"It was the hurricane of record in terms of devastating impacts in much of southern New England, especially the southeastern Connecticut coastline which was particularly hard hit," Porter said.

The storm made its first landfall in the Northeast near Bellport, New York, on the afternoon of Sept. 21, killing roughly 60 people on Long Island alone and injuring hundreds of others. It destroyed farms, killed livestock and downed 20,000 miles of power and telephone lines. It also carved out 10 new inlets into the peninsula from Fire Island to East Hampton, the most notable being Shinnecock Inlet, according to the NWS. 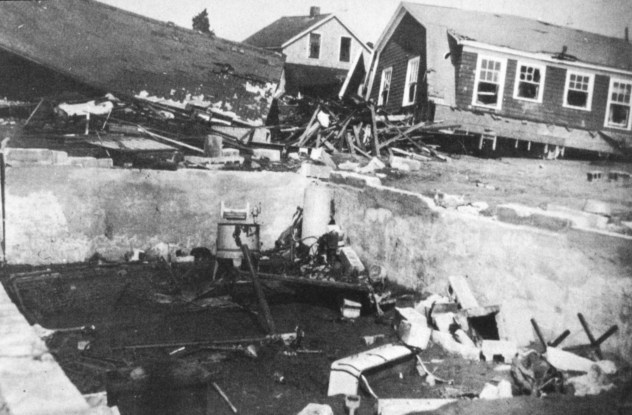 Island Park was destroyed by a breaker with a reported height of 30 to 40 feet. (NOAA Photo Library)

After cutting through Long Island, the unnamed hurricane roared ashore in southern Connecticut between Bridgeport and New Haven around 4 p.m., still a Category 3 hurricane with maximum sustained winds of 115 mph.

It was there where hundreds of lives were lost as the powerful winds barraged the area and the storm tide -- the combination of storm surge and the tide -- rose to record levels.

The 1938 New England hurricane struck during a high tide, producing storm tides of 14 to 18 feet across most of the Connecticut coast, according to the NWS. 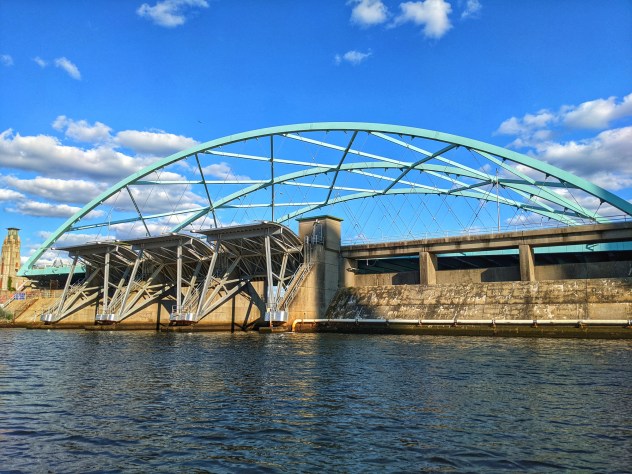 Downtown Providence was swallowed by a nearly 20-foot storm tide, and parts of Falmouth and New Bedford, Massachusetts, were submerged under as much as 8 feet of water. Tides increased rapidly for an hour and a half before the highest watermarks were reached, according to the NWS.

The 1938 Long Island Express Hurricane certainly would not be the last to impact the Northeast, with Hurricane Carol slamming into Long Island and then Connecticut in 1954 as a Category 3 hurricane. To protect Providence from future tropical cyclones, the Fox Point Hurricane Barrier, a 3,000-foot-long tidal flood barrier, was built.

Construction on the barrier began in 1960 and it was completed in 1966. Spanning across the Providence River, it provides protection to the city from storm surges in Narragansett Bay.

According to Porter, the bay's shape and depth make it "especially capable of amplifying storm surge impacts."