After traveling more than 6,600 miles in over a week, Bonnie's unique record-breaking journey concludes. 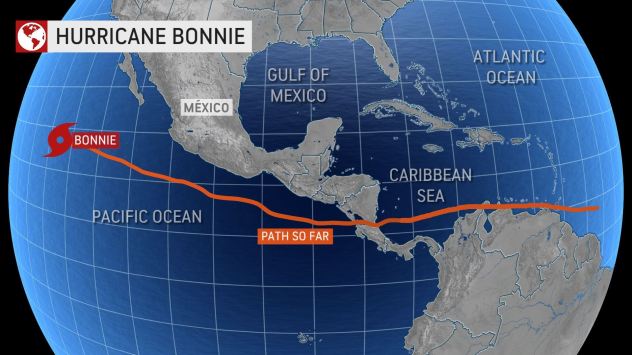 The second named system of the year in the Atlantic Basin, which crossed over Central America and became a post-tropical cyclone away from land in the Eastern Pacific basin on Sunday, July 3, was anything but a typical tropical cyclone. From its unusual track to the locations it has impacted, Bonnie was full of surprises.

After making landfall along the Atlantic coast of Central America near the border of Nicaragua and Costa Rica, Bonnie maintained its circulation as the system traveled over Central America and even after it emerged into the Eastern Pacific as a tropical storm.

On Saturday, July 9, Bonnie became a post-tropical cyclone at 129.4 degrees west longitude, just over 10 degrees shy of the Central Pacific basin at 140-degree west. No Atlantic-Pacific crossover storm has ever moved that far west. The record holder, Hurricane Cesar-Douglas in 1996, traveled to 130 degrees west longitude. 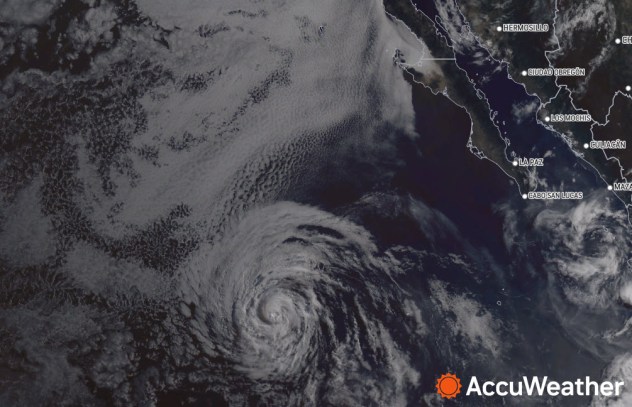 Hurricane Bonnie as seen on the AccuWeather RealVue® satellite on the morning of July 8, 2022.

Bonnie has tracked 1/4 of the Earth's circumference

Records of the longest tracks of storms are hard to come by, but it appears that Bonnie has already traveled farther than most storms originating in the Atlantic.

Bonnie's track extended more than 6,600 miles when it became post-tropical on Saturday, July 9, roughly 1/4 of the Earth's circumference, and most of that in a relatively straight line. According to the NOAA Hurricane FAQ, the longest Atlantic tropical cyclone track is Hurricane Faith in 1966, which tracked 7,894 miles, from when it emerged off the coast of Africa all the way to within 600 miles from the North Pole, in a grand half-circle track. The longest track of a Pacific storm is likely John in 1994, which started in the Eastern Pacific, crossed into the Central then Western Pacific and turned around to cross back into the Central Pacific.

Just moving from the Atlantic into the Eastern Pacific is a tough feat for tropical systems because doing so requires a tropical cyclone to keep its structure when moving over mountainous terrain in Central America. 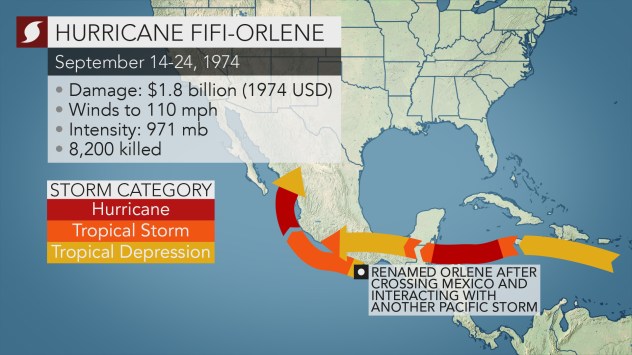 One famous crossover storm was Hurricane Fifi-Orlene in 1974, which formed just south of Puerto Rico as Fifi before crossing into the Eastern Pacific and being renamed Orlene, although meteorologists disagree on whether Fifi made it into the Eastern Pacific intact. Hurricane Fifi-Orlene was responsible for nearly $2 billion in damage and killed more than 8,000 with its flooding, making it the third most-deadly Atlantic hurricane on record.

"There have been close to 20 officially recognized crossover storms -- meaning they tracked in both the Eastern Pacific and the Atlantic basins. Another 20 or so storms may have crossed over but were never officially recognized as such," AccuWeather Senior Weather Editor and Meteorologist Jesse Ferrell said.

"If a storm is going to cross over, this is the place to do it," Ferrell added. "There's less land in the way -- especially with Lake Nicaragua taking up a significant portion of the land a storm needs to traverse there." 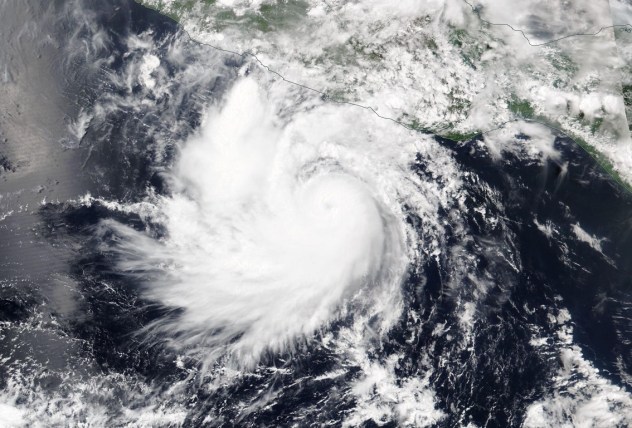 Bonnie had an unusual origin story

Bonnie, designated at the time by the National Hurricane Center as Potential Tropical Cyclone Two, formed in the Atlantic at 8.6 latitude north, about 250 miles north of French Guiana. At that location, it became one of the southernmost tropical cyclones ever to develop.

"According to the NOAA Hurricane Historical Tracks Archive, the only storm that formed farther south was Tropical Storm Bret that formed as a tropical depression at a mere 7.5 degrees north latitude on June 18, 2017, then made landfall as a tropical storm in southern Trinidad on June 20 of that year," Ferrell explained.

Compared to other Caribbean nations, Trinidad and Tobago haven't historically endured a lot of landfalls from tropical storms because of their southern latitude. While about a dozen named storms have hit the marine boundaries of the country, only one hurricane has made landfall on Trinidad -- way back on June 27, 1933.

Just over 30 years later, Hurricane Flora became the only hurricane on record to make landfall on the smaller island of Tobago on Sept. 30, 1963.

Now, we can add Bonnie, which did so before it was officially named, to that list.

The tropical system that spent time over South America

It's also unusual for a tropical cyclone to track over the continent of South America.

Only a handful of named storms have actually made landfall or traveled over Venezuela's mainland. When Tropical Storm Bonnie was still Potential Tropical Cyclone Two, it tracked over the Paraguaná Peninsula, a small peninsula located in the northern part of Falcón State, Venezuela.

That's something that has been recorded only three times, with only another two tropical storms tracking even farther south in the country.

After emerging back over the Gulf of Venezuela, the storm hit the Guajira Peninsula of Colombia, which has recorded only four named storm landfalls in history. One additional storm moved through Colombia, Tropical Storm Bret 1993, which traveled south of the peninsula -- the only storm to do so.

Tropical Storm Bonnie tracks toward Central America on the morning of July 1, 2022.

Bonnie made landfall in an unusual area of Central America

Late on Friday, July 1, local time, Bonnie made landfall along the Nicaragua-Costa Rica coastline, also a rare feat for tropical storms. Only two named storms on record have made landfall on the Costa Rica side of that line, in 1887 and 1973. The only landfall farther south was Tropical Storm Martha in 1969, which is the only recorded landfall in the country of Panama.