The nation’s largest reservoir is at its lowest level since it was filled in the 1930s, and experts say that the declining water levels are ‘deadly serious.’ 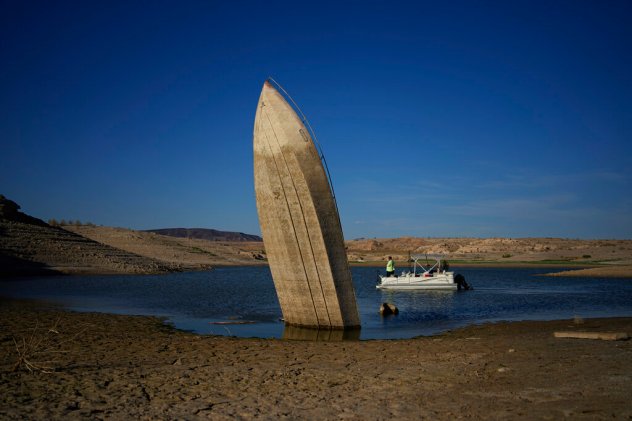 A formerly sunken boat sits upright in the air with its stern stuck in the mud along the shoreline of Lake Mead at the Lake Mead National Recreation Area, Friday, June 10, 2022, near Boulder City, Nev. Lake Mead water has dropped to levels it hasn't been since the lake initially filled over 80 years ago. (AP Photo/John Locher)

The nation's largest reservoir on Thursday measured at 1,043.8 feet, its lowest level since the lake was filled in the 1930s.

The minimum elevation to generate power at Hoover Dam is 1,050 feet, according to the National Park Service. Below this level, the reservoir would be considered an "inactive pool." However, Patti Aaron, public affairs officer for the Bureau of Reclamation's Lower Colorado region told the Boulder City Review back in May that Hoover Dam will still be able to produce hydropower below this level. She stated the new threshold where the dam would no longer be able to produce power is at 950 feet.

Should the water levels fall below 895 feet, the reservoir will become a dead pool, meaning water levels will be too low to reach the lowest water outlet at Hoover Dam and flow downstream. 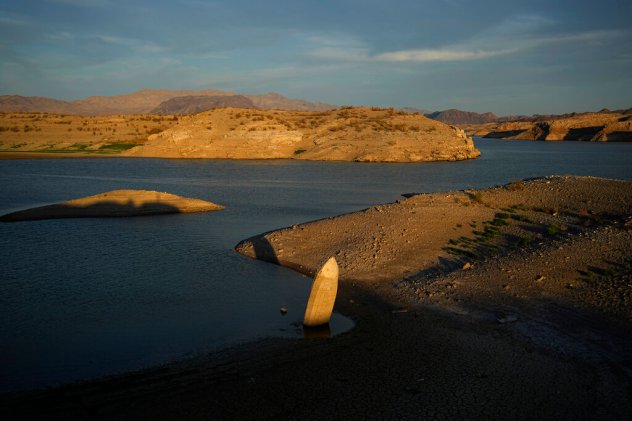 A formerly sunken boat sits upright in the air with its stern stuck in the mud along the shoreline of Lake Mead at the Lake Mead National Recreation Area, Friday, June 10, 2022, near Boulder City, Nev. Lake Mead water has dropped to levels it hasn't been since the lake initially filled over 80 years ago. (AP Photo/John Locher)

While it may take years to reach this status, the reservoir provides water to millions of people across Nevada, Arizona, California and parts of Mexico, many of whom have already seen a cut in supply due to efforts to reserve water.

"This is deadly serious stuff," Robert Glennon, an emeritus professor at the University of Arizona, told NBC News. Glennon specializes in water law and policy.

While current estimates from the Bureau of Reclamation show the lake rebounding slightly over the next few months, it projects water levels could drop to 1014.86 feet by September 2023 -- a nearly 23-foot drop compared to its Sept. 2022 estimate.

The low water levels have even prompted the WON U.S. Open bass fishing tournament to move to Lake Mohave for 2022, according to KLAS-TV. The tournament has been held at Lake Mead for the last 39 years. 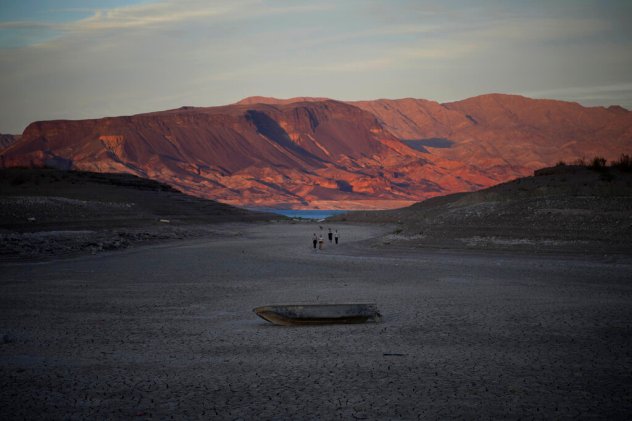 A formerly sunken boat sits on cracked earth hundreds of feet from what is now the shoreline on Lake Mead at the Lake Mead National Recreation Area, Monday, May 9, 2022, near Boulder City, Nev. Lake Mead is receding and Sin City is awash with mob lore after a second set of human remains emerged within a week from the depths of the drought-stricken Colorado River reservoir just a short drive from the Las Vegas Strip. (AP Photo/John Locher)

In August, the federal government declared the first water shortage at Lake Mead, and Stephen Wilcox told AccuWeather National Reporter Tony Laubach about a time when water gushed over the dam and recalled how the water stirred up a mist that "was almost like rain."

During the summer of 1983, Lake Mead had reached its highest recorded water level at 1,225 feet amid a strong El Niño event. The high water line mark is at 1,229 feet.

The shoreline has since receded to the point that it exposed an intake valve in April, and at least two bodies were found the following month in the lakebed that otherwise would have been far underwater.

Water levels are projected to continue to drop until the wet season begins in November.