How the most recognizable climate visualization began with a baby blanket

Every line on the blanket tells a story, and while the colors come together to create a beautiful piece, they also illustrate how quickly change has happened.

The scientist behind the "warming stripes" visualization says colors will continue to intensify unless the global population dramatically reduces emissions.

After hours of the rhythmic clicking of knitting needles and methodical stitching, Dr. Katherine Haxton had created six small hexagons, each of their colorful rows stitching a story of choices and their resulting consequences that coalesced into a glimpse of what the future could hold.

But unlike the fate weavers of myth, it's not a picture of the certain future that her threads color. She instead illustrates the patterns of the past, creating a record through skeins of yarn, hooks and needles to visualize temperature data that dates back to the Industrial Revolution.

Haxton estimates she can knit a month's worth of data within a couple of hours, methodically placing the colored stripes to tell the story of England's changing climate in wool and polyester.

"I liked the idea because I'm a scientist," Haxton, a senior lecturer in chemistry, told AccuWeather. "I liked the idea of producing something with wool that visualizes data. It felt like a much better way than a bar graph on a screen [which] always seems a bit scary, a bit like math class or something."

Crafters and climate scientists alike are hoping that this different form of data visualization reaches and connects with communities in a way that line charts and graphs cannot, so it was only fitting that a project similar to Haxton's would inspire a climate scientist in the creation of one of the well-known and most-circulated climate graphics. 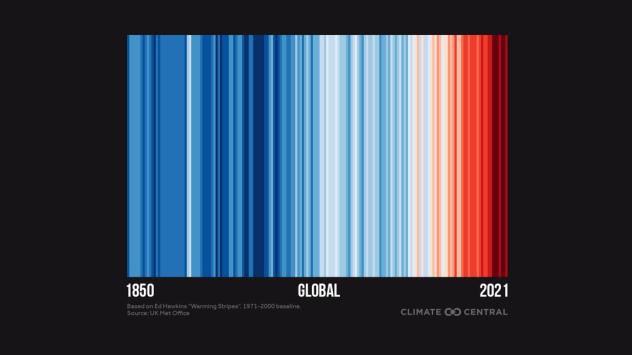 "As a climate scientist, I thought it would be fun to do one with 100 years of global annual temperature data, thereby creating a century record of temperature variability, which also showed the long-term trend of global warming," Highwood told AccuWeather in an email.

The "global warming blanket" as she had dubbed it consisted of 100 crocheted rows of varying colors of yarn she had on hand at the time, representing 100 years of temperature anomaly, or the departure from the average temperature. The rows start off in blues and greens, slowly fading into paler tones and teals before darkening into pinks and purples. A solid chunk of the bottom rows are made of bright yellows, oranges and reds.

Ok so i am a crochet addict. This is my "global warming blanket" -stripes coloured according to last 100 years T anomaly... 😀 pic.twitter.com/dm9P7cLvzd

"I thought it was a really neat way of talking about the changing climate," Professor Ed Hawkins, a climate scientist at the National Center for Atmospheric Science at the University of Reading in Reading, England, told AccuWeather National Reporter Bill Wadell, but he added that the colors Highwood had chosen for the blanket were changed to the simple blues and reds that the graphics now sport. "The stripes as you see them now were born after that."

The idea was to "present the fact that the world is warming and to do that as simply and as visually as possible."

For essentially every region or country, the stripes change from mainly blue to variations of red, emphasizing the global issue.

Since its creation, the graphic has become a symbol of a warming climate and the call for action, appearing on the badges of U.S. senators at the 2019 State of the Union address, displayed by British rock band Enter Shikari at international festivals and even on the catwalk at London Fashion Week.

For Highwood, it's the participation in knitting or crocheting the data that best communicates the information and nurtures an understanding of the weight of climate change.

"There is something about almost feeling the data as you build it into something tangible that really makes it connect, even more than seeing the stripes on a screen or a dress or a mask," Highwood said.

"I do a lot of scientific outreach, and at the moment, we're trying to develop a project where we can maybe get people to come together to produce something like a temperature blanket," Haxton said, adding she planned to use it as an opportunity to start a conversation with audiences that she and her colleagues wouldn't normally reach with science alone.

"I had this vision of a whole bunch of people sitting around, crocheting or knitting or doing something other crafty to represent data and also maybe having a discussion about what it means," Haxton said. 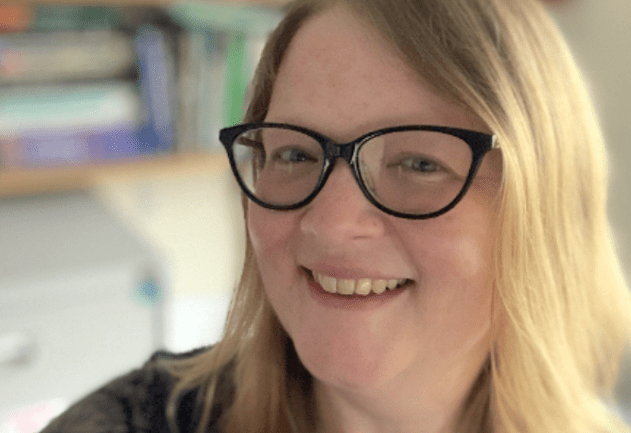 Such conversations arose at the launch of the CoCreate Network, which allows academics and the public to gather and explore issues, where Haxton displayed her work: a blanket she had crocheted to show the gradual change in yearly average temperature from 1979 to 2019.

The bright colors garnered the attention of those passing by then prompting the million-dollar question: What do they represent?

As she explained it to them, she said she could "see the moment of realization when people were contemplating this blanket."

The blanket consists of 40 rows, each representing a year from 1979 to 2019 and its average temperature departure from the yearly temperature average from 1720 to 1800. A solid chunk of dark blue sits at the top, wavering to green yarn before the dark blue returns, illustrating how the departure from average hardly rose above 1 degree Celsius over nearly the first decade. But a notable shift happens at the line representing 1989, a fourth of the way down the blanket.

There were instances in the data before 1979 when the year's average temperature rose above 1 degree Celsius, the light purple representing a difference in average between 1 and 1.38 degrees Celsius. Years like these were far and few between. But 1989 was different, with the proceeding year represented by dark purple yarn.

That same year, cities across the southern U.K. broke all-time temperature records as an August heat wave pushed temperatures to the high 30s (high 90s in Fahrenheit). The heat wave spanned portions of southern, central and eastern England, as well as into eastern Wales, and persisted into the fourth day of August. The heat peaked on Aug. 3, according to the U.K. Met Office, sending temperatures across the region to record-shattering levels.

Such was the case in Cheltenham, about 95 miles northwest of London, which experienced a high temperature of 37.1 degrees Celsius (98.78 F) on Aug. 3, surpassing the old record of 36.7 C set at Raunds in Northamptonshire, Epsom in Surrey and Canterbury in Kent on Aug. 9, 1911.

"The first four days of August saw a degree and spatial extent of high temperatures that exceeded any other hot spell in the 20th century," a U.K. Met Office summary of the heat wave reads.

"The main consequences we're going to experience is through our extreme weather -- through heat waves becoming more frequent and more intense, through rainfall becoming heavier and bleaching coral for example around the world, melting arctic ice. These are consequences that we can see," Hawkins said. 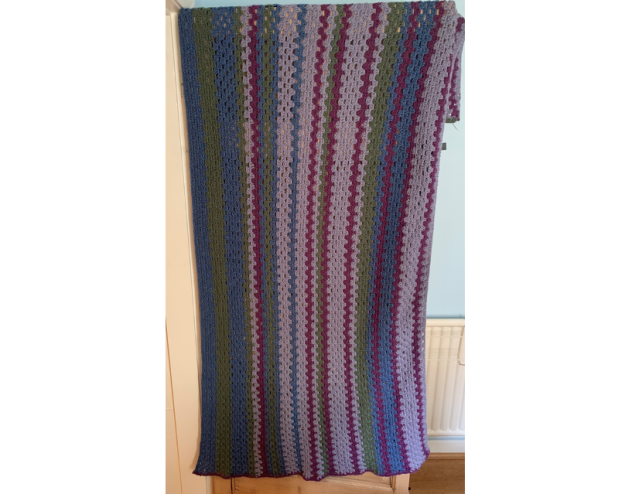 Haxton reflected on that summer, a time when she would have been around 11 and still in primary school. While there would be a few more cooler years to follow, there were always warmer years close behind.

"I think one of the things that really started to strike me was early on the striped blanket I wasn't really using the warm colors very much," she continued. "It was all the average or just a little bit above average colors. And then suddenly the darker colors, the hotter colors, start appearing."

The next time, the U.K. would see its yearly average temperature vary so greatly, it wouldn't be a 40-year gap as it had previously seen, but a 10-year gap, reappearing in 1999. Since 1999, the purple lines of thread have recurred within five years of the previous one.

Of the 40 years of data in the blanket, the hotter years were almost all in the most recent 20, if not the last 10, years. The last year that wasn't a light or dark purple was 2013, a dark blue year.

"It was kind of sobering to sort of look at the data," Haxton said.

Her latest project consists of six knitted hexagons, each representing a month from 2021. They read like tree rings with the centermost portion representing the average temperature of the month before the Industrial Revolution in degrees Celsius. Radiating outward, each line represents a day of that month, its color determined by the temperature taken at 3 p.m., local time, from the Met Office Weather Observation's Audley site, located in Staffordshire, England, south of Manchester.

The light pink thread represents the cooler temperatures, and as the temperatures grow warmer, the colors they represent move upward through the color spectrum.

The June hexagon in particular stands out as yellow and orange rings radiate from a green center.

"This is not something that’s going to happen in the future. It’s already happening here and now," Hawkins, the climate scientist from the National Center for Atmospheric Science at the University of Reading, said. "It’s something we’re going to have to get used to, and the consequences will only continue to get worse while we keep adding carbon dioxide to the atmosphere.”

He warned that although the stripes will "undoubtedly" get darker over the coming years due to change not happening overnight, it still isn't too late.

"We have to be positive about the future because we have caused these changes to our climate," Hawkins said. "It’s our actions that have done that, and that is, in one way, a hopeful message because it means that our actions determine what happens next. It’s our choices that we make as a global society where it determines how dark the stripes get in the future and how high global temperatures go."

He urged policymakers to set the right path, enabling people to move forward toward net-zero emissions, or when we're able to take out as much carbon as we put into the atmosphere. Because while global temperatures will take more global cooperation to fix than unraveling a stitch, we still have time to choose the next colors of our world's tapestry.

How these 5 cities became the most intense urban heat islands