The storm, which hammered the mid-Atlantic beaches for days on end beginning on Mother’s Day weekend, helped unearth a World War I-era relic.

Coastal storms along the New Jersey shore uncovered century-old “ghost tracks” from the Cape May Sand Company on the beach near Cape May, New Jersey, on May 11.

Mysterious World War I-era railroad tracks hidden in the Atlantic Ocean? It's not quite the plot of a thriller novel, but rather an actual discovery found along a beach in Cape May, New Jersey, in the wake of a fierce coastal storm last week.

Liz Goldsmith was walking along the shores between Sunset and Higbee Beach last Tuesday when the ocean – fueled by the combination of the storm, coastal erosion and the daily low tide – unearthed one of the area’s rarest finds. The tracks, which date back to the early 20th century, were seen in 2014 for the first time in over 80 years and have since been revealed by different weather events in subsequent years, including by a couple of big storms in 2018.

Nicknamed "ghost tracks," the tracks were used to support sand mining and World War I munitions testing, according to NJ.com. The Cape May Sand Company also used the rails from 1905 to 1936 to remove sand from the beach and turn it into glass or cement. 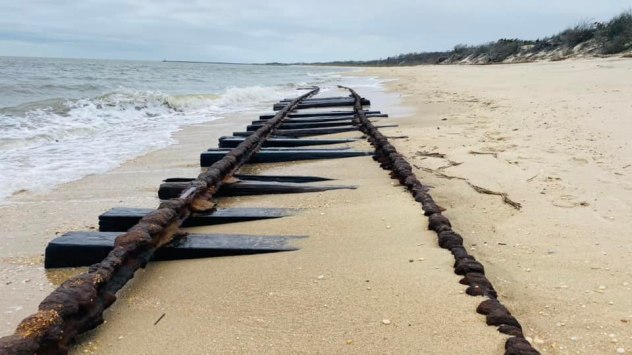 Local historian Ben Miller told NJ.com in 2017 that cement created from the sand that was carried along the tracks helped build the Panama Canal.

"These are like hidden treasure — unearthed," Miller said. "All of a sudden they're there, and what used to be just the sandy beach that you walked down, all of sudden they're like a portal to the past."

Matthew Malkiewicz, an electrical engineer whose side-hustle involves photographing steam trains, said he was one of the first to witness the ghost tracks when they emerged eight years ago.

"Back in 2014, I was tipped off that some of those tracks down in Cape may surface after 80 years," Malkiewicz recalled. "And then the next morning I ran down there on a low tide and I was there at sunrise to catch those first photographs."

He suggested that when the tracks are out of sight, they are very much out of mind. "People working and living on the beach ... had no idea that a train ever ran there."

Goldsmith's 2022 discovery of the track was made possible by the coastal storms that smacked the coast of New Jersey in the early parts of last week. The storms not only dropped multiple inches of rain and dealt fierce wind gusts, but they also accelerated the growing concerns about the area's beach erosion. 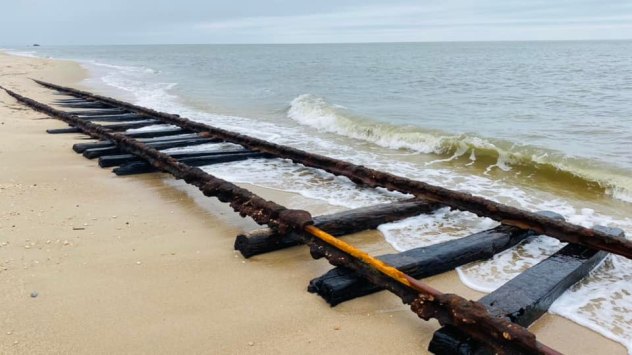 The 'ghost tracks' went over 80 years without being seen before coastal erosion unveiled them. (Facebook/Liz Goldsmith)

Massive amounts of sand were wiped away from beaches throughout the area, including on Sunset and Higbee Beach. The erosion was most severe farther north in North Wildwood, particularly in the area near 7th Avenue and JFK Beach Drive, 6abc reported, as the entire beach area and all of its replenishment sand was wiped away.

“This caused significant beach erosion for some of the beaches in South Jersey including the erosion of sand dunes which in some cases turned into steep cliffs,” AccuWeather Senior Meteorologist Tom Kines said. “The beach erosion impacted the shoreline southward into the Carolinas.”

“Unlike the East Coast storms we usually see in the winter, this storm pounded the shoreline for several days while a nor’easter usually only causes problems for a day or two,” Kines said. “Since the wind was out of the same direction for multiple days, this caused the waves to progressively get larger and larger while impacting the same beach day after day.”

Mysterious skull identified after washing up on beach