When the skies went dark: Historians pinpoint the very 'worst year' ever to be alive

Next time you think you have it hard, consider what life was like when a cataclysmic event shrouded part of the earth. Even after it ended, a decade of pain and suffering followed.

Despite countless human-caused nightmares throughout history, if historians have to pinpoint one year that would have been the worst to live through, it all goes back to a pair of volcanic eruptions.

You wake up to a dark, dreary, glum-feeling, Monday-type of morning. For the 547th consecutive day.

Just 18 months prior, you were a hard-working farmer gearing up for another bountiful crop season.

But then the skies went dark.

And they stayed dark -- day after day, month after month -- from early 536 to 537. Across much of eastern Europe and throughout Asia, spring turned into summer and fall gave way to winter without a day of sunshine. Like a blackout curtain over the sun, millions of people across the world's most populated countries squinted through dim conditions, breathing in chokingly thick air and losing nearly every crop they were relying on to harvest.

This isn't the plot of a dystopian TV drama or a fantastical "docufiction" production. 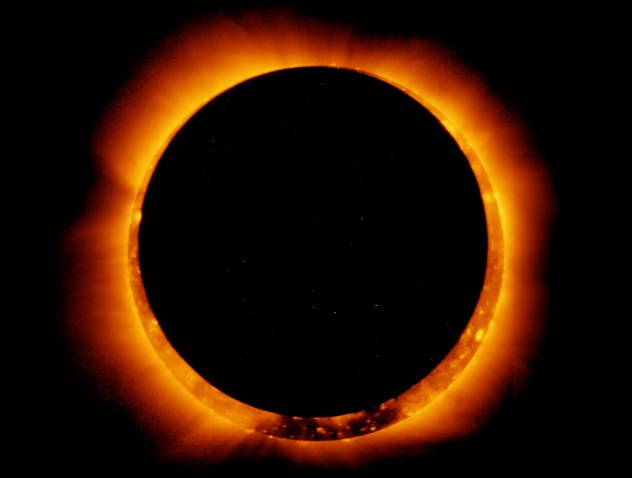 The moon passing in front of the sun during an annular solar eclipse on Jan. 4, 2011. (NASA/Hinode/XRT)

This was a harsh reality for the millions of people who lived through that literally dark time or, as some historians have declared, the very worst year ever to be alive.

"For the sun gave forth its light without brightness, like the moon, during this whole year, and it seemed exceedingly like the sun in eclipse, for the beams it shed were not clear nor such as it is accustomed to shed," was the grim account Procopius, a prominent scholar who became the principal Byzantine historian of the 6th century, gave in History of the Wars. "And from the time when this thing happened men were free neither from war nor pestilence nor any other thing leading to death."

Some 1,500 years later, Harvard University medieval historian Michael McCormick has reached a similarly grim conclusion about not just 536, but the dreadful decade that followed that terrible year. For people living across Europe in 536, "It was the beginning of one of the worst periods to be alive, if not the worst year," McCormick said.

As McCormick told AccuWeather, it was all set off by rapid, drastic climate change. In the spring of 536, a volcanic eruption triggered the Late Antique Little Ice Age (LALIA), he noted. And its ramifications, on top of ensuing eruptions in 540 and 547, were devastating. 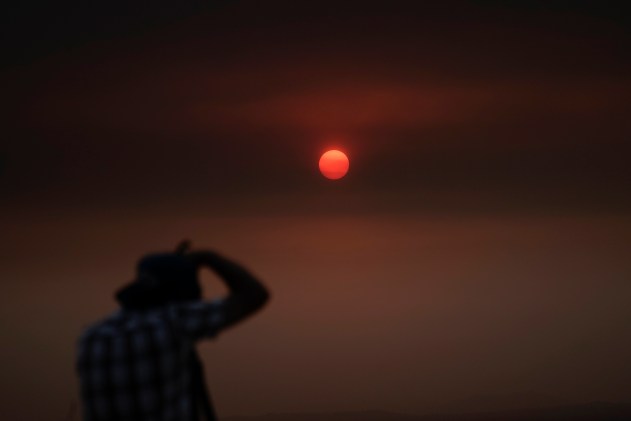 Jason Anderson, 42, takes pictures as the sun peeks through thick smoke generated by the Bobcat Fire in San Dimas, Calif., on Sept. 9, 2020. Hazy clouds of smoke from dozens of wildfires darkened the sky to an eerie orange glow over much of the West Coast that week, keeping street lights illuminated during the day and putting residents on edge. (AP Photo/Jae C. Hong)

"Aerosols for the big volcanic eruptions blocked solar radiation, dropping the solar heating of the Earth’s surface," he told AccuWeather, adding that climate analysis from Cambridge University in the U.K. done on tree rings show the average summer temperature "dropped by between 1.5 degrees and 2.5 degrees Celsius across Eurasia."

That's up to 2.7 to 4.5 degrees Fahrenheit cooler due to the heavy smog left behind after the eruption. The skies remained dimmed for up to 18 months, multiple historical witnesses recounted, triggering the dark year of turmoil that earned 536 its dubious distinction.

Weather patterns were severely affected by the blocked sunlight, leading to summer snowfall in China and the lowest temperature levels in more than 2,300 years, according to recorded historical accounts and climate reconstruction analysis.

In the Middle East, China and Europe, a dense fog was an inescapable daily nightmare while widespread agricultural challenges in Ireland resulted in a "failure of bread from the years 536–539 AD," according to The Gaelic Irish Annals.

Much of scientists' understanding of the impacts from the Iceland volcano were found during the Historical Ice Core Project, a partnership between the University of Maine and Harvard University that McCormick co-led along with Professor Paul Mayewski of the Climate Change Institute. Using ice core samples from Iceland, the team mapped out an archeological timeline to pinpoint when and where the initial volcanic eruption must have occurred in Iceland.

Its impacts were widespread and deadly.

The outbreak of the original bubonic plague

While the 6th century outbreak of the bubonic plague may be less remembered than the 14th-century reoccurrence of the disease (which came to be known as the Black Death), the 6th-century pandemic was still responsible for destroying at least one-third of the eastern Roman Empire population, leading to its collapse.

Dubbed the Justinian Pandemic or the Plague of Justinian, the disease spread throughout Roman Egypt before infecting the rest of the world over the ensuing 200 years. McCormick said ancient DNA has shown the disease-causing pathogen to beYersinia pestis, bubonic plague, a disease of rats and other rodents that spilled over into human populations.

In the wake of the climate-altering volcanic eruptions and darkened year of 536, McCormick said the situation was fatally ripe for the plague to wreak havoc. 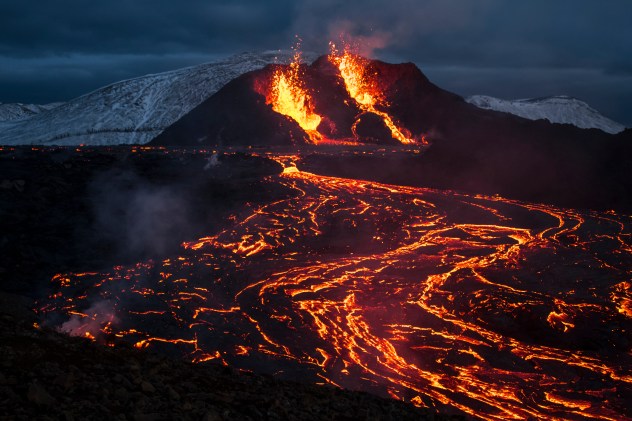 Lava flows from an eruption of a volcano on the Reykjanes Peninsula in southwestern Iceland on March 29, 2021. Iceland's volcano eruptions are still attracting crowds of people hoping to get close to the lava flows. (AP Photo/Marco Di Marco)

Although he said there has yet to be a precise link established between the abrupt onset of the LALIA and the Justinian Pandemic, McCormick said that "it seems likely that, for instance, the food shortages caused by the sudden cooling in many parts of Eurasia weakened the populations and made them more susceptible to the pathogen." The famines almost certainly led to mass migrations of people as well, he said, likely carrying the disease with them.

Compared to the modern-day hardships dealt by COVID-19, the differences are shocking.

"You have to take the period as a whole," he said, adding that "536 was just the beginning of a very tough time. The plague pandemic on top of the abrupt cooling must have been very difficult. Today COVID-19 is terrible, but compare the death rate for bubonic plague." He pointed to the 1.8% case-fatality ratio in the United States compared to the 40% to 60% mortality rate for untreated bubonic plague.

So just how massive must those volcanic eruptions have been?

Mayewski, a glaciologist from the University of Maine, was also heavily involved in the Historical Ice Core Project and he told Science Magazine that his team was able to analyze 2,000 years worth of historic, natural disasters taken from a 72-meter drilling in Iceland that presented the researchers with a historical timeline of element levels.

Using a laser to carve 120-micron slivers of ice from the core, scientists could analyze the element spikes and drops of different moments in history to line them up with disasters that helped better piece together our understanding of what shaped the world we live in today.

In the ice sample from the spring of 536, graduate student Laura Hartman and volcanologist Andrei Kurbatov found microscopic particles of volcanic glass, which closely matched glass particles previously found in lakes around Europe and an ice core sample taken from Greenland.

Kurbatov concluded that the perfectly disastrous mix of winds and weather in 536 must have guided the plume across Europe and into Asia, casting a chilly pall as the volcanic fog "rolled through."

Other researchers also believe that the Icelandic 536 eruption emitted thick ash that spread across the Northern Hemisphere, pumping large quantities of sulfate into the atmosphere, according to a 2015 article in Smithsonian Magazine.

On top of that eruption, other studies conducted recently have suggested that there could have been more than one volcano responsible for that time period's tragedies. 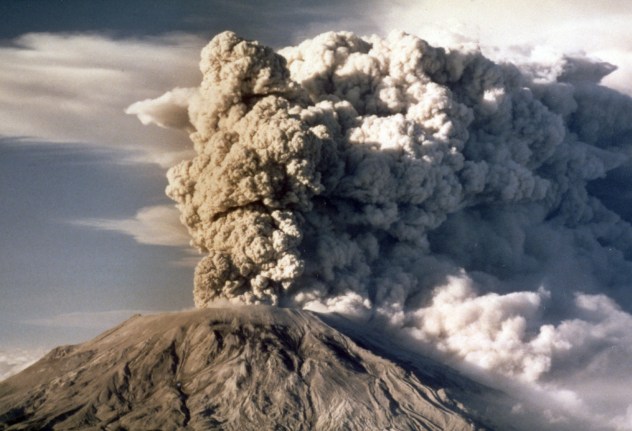 The other notable blast, researchers say, is believed to have been one of the strongest eruptions of the last 10,000 years, likely only comparable to the 1815 eruption of Mount Tambora.

That Mount Tambora eruption also led to a similarly bleak year, as much of 1816 was also shrouded in darkness, leading to unprecedented low temperatures and hundreds of thousands of deaths from the eruption and starvation due to that season's failed crops. That time period became known as "The Year Without a Summer." In the U.S., snow fell in June in New York and Maine while heavy frosts and ice storms occurred as late as July in the region.

In the 6th century, the other history-altering volcano erupted about 5,000 miles away from Iceland in Central America, with a volcanic blast more than a hundred times stronger than the 1980 eruption of Mount St. Helens, Researcher Robert Dull told National Geographic.

Man stumbled on incredible discovery in opening of cliff

A team of researchers published a study in the Quaternary Science Reviews placing the location of the eruption in central El Salvador from the dormant Ilopango. Today, a lake the size of 28 square miles sits in the volcanic caldera left behind.

“This is the largest eruption in Central America that human beings have ever witnessed,” Dull, a geologist at California Lutheran University, told the publication. “The importance of the event is even greater, both how the Maya overcame it and how it impacted what happened next.”

The pair of cataclysmic eruptions are believed to have combined to trigger the following decade’s years of disease, famine and tragedy.

Using historical dating techniques such as tree ring analysis and stable carbon isotope records, the researchers presented a model to depict just how brutal life was for people alive at that time.

The dust veil, they say, reduced normal levels of solar radiation and thus ruined years of crop harvests, and "contributed to remarkably simultaneous outbreaks of famine," leaving humans with a long-term lack of vitamin D, which diminished health and quality of life in those years of darkness. 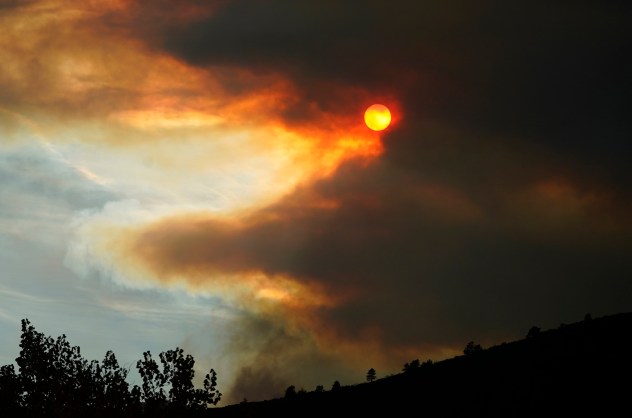 Smoke obscures the sun as fire approaches a ridge along Highway 36 as several wildfires burn in the state on Oct. 21, 2020, south of Lyons, Colo. (AP Photo/David Zalubowski)

McCormick said that as more natural climate records and LALIA reconstructions are better understood, scientists will be able to better understand how that dust veil drastically changed the weather in different parts of the Northern Hemisphere.

"The Arabian peninsula, for instance, might have become a little less dry, while the effect seems more dramatic and negative north of the Mediterranean," he said. "So far, most of the natural climate records from which the LALIA has been reconstructed come from Eurasia and North America, so more northerly latitudes."

Even if it may sound hard to believe given the past 100 years of multiple World Wars and numerous, devastating pandemics, McCormick told History.com that the horrifying period of history was not blown out of proportion by witness accounts.

“It was a pretty drastic change; it happened overnight,” he said. “The ancient witnesses really were on to something. They were not being hysterical or imagining the end of the world.”

CORRECTION: The smog caused by the volcano caused temperatures across Eurasia to cool by 2.7 to 4.5 degrees Fahrenheit, not 36 degrees Fahrenheit as a previous version of this story stated. The error was the result of a conversion mistake.