After the Category 4 hurricane rampaged through Pine Island, the residents who evacuated are returning to find their island a looks like "war zone."

That was how resident Jenna Lombardo described the devastation left by Hurricane Ian. Behind her, homes laid crumpled and crushed alongside the sand-covered road, and at least one of the homes had collapsed into a sinkhole.

The utter destruction of the island was juxtaposed with the bright colors of what remained of a few of the buildings -- a neon green building with its roof pried open, a Pepto-Bismol pink structure surrounded by debris and pastel shutters framing swaying palm trees and power lines.

One royal blue house had partially plunged into the sea. A bramble of broken wood and outdoor furniture blocked off one of the entrances, yet somehow a blue mailbox with three decorative dolphins managed to remain bolted to its cement square foundation.

While still upright, the road beneath it had fractured, separating from where the causeway once met the road. Here, a boardwalk provides a makeshift connection between the two roadways for pedestrians. 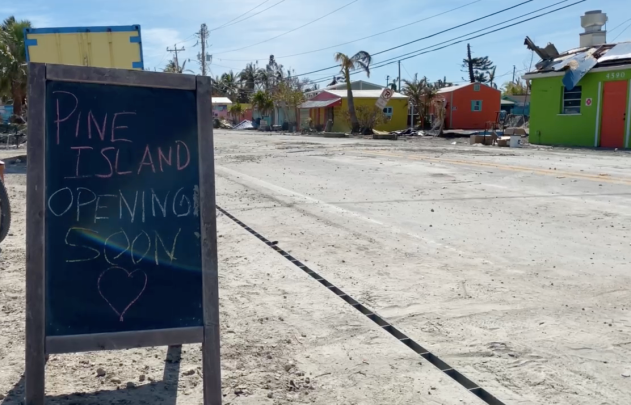 Lombardo had left Pine Island before the strong Category 4 hurricane struck the barrier island off Florida's southwest, and she was only recently able to return.

"I definitely cried when I came over on the boat yesterday for the first time," Lombardo said. "I saw somebody that I knew that had stayed on [the] island and I kind of just melted and bawled my eyes out."

Lee County -- which includes Pine Island, Sanibel Island, Fort Myers, and Fort Myers Beach -- was one of the counties that bore the brunt of Hurricane Ian's wrath. Before-and after-satellite imagery from Maxar showed the full extent of the damage in the southwestern portion of the state, with multiple causeways collapsed, boats tossed ashore like toys and neighborhoods flooded across Lee, Charlotte and Sarasota counties. 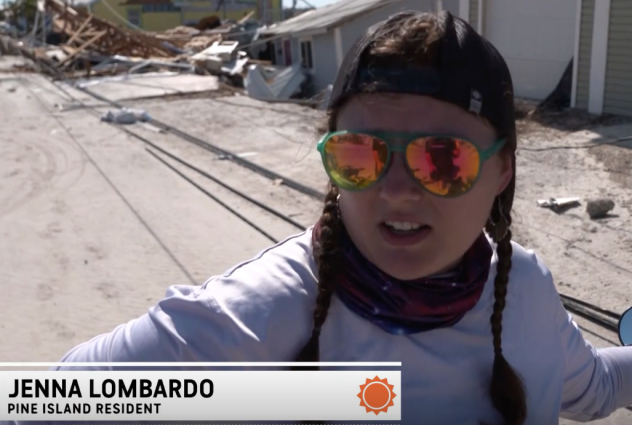 At least 172 public water systems across the state were placed under a boil water notice that was associated with impacts from Hurricane Ian, according to Florida Health, though a few have since been rescinded.

Nine of the issued advisories were in Lee County, including a notice for the public water system of Cape Coral and Fort Myers.

Pine Island was still without water and power as of Oct. 3, Leoffler reported. As of Wednesday night, over 147,000 tracked customers in Lee County alone were still without power, accounting for more than half of all outages statewide, according to PowerOutage.US.

With the causeway that connected the island to the mainland washed out, the island's population of some 9,000 people now relies on boats to deliver supplies and returning residents.

Mike Stark of Tampa Bay was one volunteer who offered his time and boat to shuttle people and supplies between the island and mainland.

"Well, for first, it was supposed to come through our area, so if it did, I would hope [for] the same courtesy back," Stark told Leoffler. "It's just another chance to look at life, a second chance at life. It barely missed us."

The Florida Department of Transportation began assisting with rebuilding roads and adding a temporary bridge on Monday, completing the goal of having drivable access to Pine Island for residents and first responders Wednesday.

"We are proud to have worked alongside our partners, Lee County, and deliver on our promise of reconnecting this community to the mainland as quickly as we possibly could," FDOT Secretary Jared W. Perdue said.