The hardest-hit areas have been described as resembling “a war zone” and Ian’s death toll has climbed above 100 as rescue crews go door-to-door to search for survivors and help in recovery.

Nearly a week after Hurricane Ian obliterated communities in Florida, the death toll continues to rise as rescue crews go door-to-door in some of the hardest-hit communities. While hundreds of thousands remained without power on Tuesday and roadways were still flooded, construction on a makeshift bridge broke ground to help those stranded on Pine Island, one of several barrier islands that suffered the full force of Ian’s wrath.

The death toll climbed on Tuesday after growing to 100 on Monday, with at least 110 confirmed U.S. fatalities blamed on Ian. At least 105 of those deaths occurred in Florida, CNN Newsource reported, as well as five in North Carolina, according to the governor there. In Florida, Lee County was the largest source of the casualties, with 55 deaths reported by county officials. The Associated Press also reported three fatalities in Cuba, where Ian struck before hitting the U.S.

Most of the deaths from the hurricane were a result of drowning, but some have been blamed on harsh consequences in the aftermath of the storm, such as an elderly couple who died after power to their oxygen machines shut off.

“Although the death toll from Ian is fluid and historical numbers are inexact, Ian is likely the deadliest tropical system for the state of Florida since the 1935 Labor Day Hurricane, which killed over 400 people,” AccuWeather Senior Weather Editor Jesse Ferrell said.

New photos and videos emerging from the epicenter of where Hurricane Ian made landfall show the sheer power the storm packed. Homes are barely recognizable on Captiva Island, a barrier island in Lee County right near where Ian made its first United States landfall as a Category 4 storm.

Footage captured by storm chaser Brandon Clement shows debris, fallen trees and power lines scattered around the island. Inside homes, watermark stains tell a harrowing tale about just how high the storm surge rose. Furniture can be seen scattered about, and the floors are covered in a mixture of sand and mud.

Despite nearly a week having passed since Hurricane Ian brought torrential rainfall and catastrophic storm surge to Florida, river levels continued to rise Monday, and homes and streets in many places were still inundated.

"The sandy soil in Florida can absorb light to moderate amounts of rain rather quickly, but when you get rainfall of 1-2 feet, even that can be overwhelmed," AccuWeather Senior Meteorologist Alex Sosnowski explained. "It can take a long time for that to drain off."

Officials warn the floodwaters will make for a dangerous situation as rescue and recovery efforts continue.

"We see so many more injuries and sometimes more fatalities after the storm," Deanne Criswell, administrator of the Federal Emergency Management Agency told Fox News Sunday, The Associated Press reported. "Standing water brings with it all kinds of hazards -- it has debris, it could have power lines."

Officials said thousands of people had been rescued in the days since the storm left its vicious mark. The federal response to the ongoing search-and-rescue process could be one of the biggest ever.

“We pre-positioned the largest amount of search-and-rescue assets that I think we’ve ever put in place before,” Criswell said during her appearance on Fox News Sunday.

President Joe Biden is expected to travel to Florida Wednesday to visit areas that were ravaged by Ian. On Monday, Biden visited Puerto Rico, which is still recovering from Hurricane Fiona’s powerful strike two weeks ago.

According to Lee County's evacuation strategy plan, the delay is an apparent violation and may have contributed to fatal consequences as the death toll continues to rise, the Orlando Sentinel reported.

Over the weekend, Florida Gov. Ron DeSantis defended the state's early preparations for Hurricane Ian as questions arose on whether or not hard-hit areas, like Lee County, received enough advance warning to evacuate, Politico reported.

"When we went to bed Monday night, people were saying this is a direct hit on Tampa Bay -- worst-case scenario for the state," DeSantis told reporters as he defended the Lee County officials who issued the evacuation notice on Tuesday instead of Monday. Lee County includes Sanibel Island, Pine Island, Fort Myers Beach and Fort Myers -- some of the worst-hit places.

Imagery from Clement revealed that many houses on barrier islands in Lee County did not stand a chance from the powerful winds and storm surge Ian delivered. A blue house, along with a few other homes on Captiva Island, remained standing as surrounding buildings were brought down to their foundation. Debris could be seen scattered in all directions.

On Monday, Lee County Sheriff Carmine Marceno stated that search-and-rescue teams have rescued 800 people thus far. Marceno said it is unknown how many people are still missing, and that rescue efforts are continuing, including the deployment of 100 National Guard members to Pine Island.

DeSantis' office on Monday stated that as of 7 a.m. EDT Monday, more than 1,900 rescues had been made in the state, with more than 1,000 search-and-rescue team members deployed.

The sudden surge of water during the storm's landfall forced many residents who didn't evacuate to seek shelter on roofs or in attics. Fort Myers residents described the water pushing through their doors and walls.

"Within 30 minutes it was up to my door and within an hour it was pushing through my door," Jeannel Thyl, a Fort Myers resident, told AFP.

Before and after satellite imagery from Maxar showed just how devastating the hurricane was to the state. Neighborhoods have disappeared and coastlines were left changed. Flooded roadways and crumbled bridges left many people stranded with limited cellphone coverage and no water, electricity or internet.

Aerial photos before and after Ian

DeSantis said at a press conference on Sunday that construction of a temporary passageway for Pine Island will begin this week, the AP reported.

“It’s not going to be a full bridge," the governor said. "You’re going to have to go over it probably at 5 miles an hour or something, but it’ll at least let people get in and off the island with their vehicles."

On Tuesday, DeSantis directed the Florida Department of Transportation (FDOT) to send more than 130 trucks to construct a temporary bridge to Pine Island "by the end of the week."

Florida first lady Casey DeSantis stated that the Florida Disaster Fund had raised nearly $35 million within the first five days of the fund website's activation. State figureheads have been making donations to the fund, such as Tampa Bay Buccaneers superstar Tom Brady, who called upon the "rest of the NFL family in our state" to also help recovery causes. Another donation, a $280 life-savings haul from the piggy bank of 7-year-old Dominic D’Andrea, gained popularity on social media Tuesday.

Florida officials said on Monday that some schools in the southwestern part of the state could open as soon as this week, once power and water are restored. However, it could be much longer before schools in the hardest-hit locations welcome students back. As of Monday, 46 districts were open in the state as a whole, with DeSantis' office stating that "many more" would be opening later in the week. 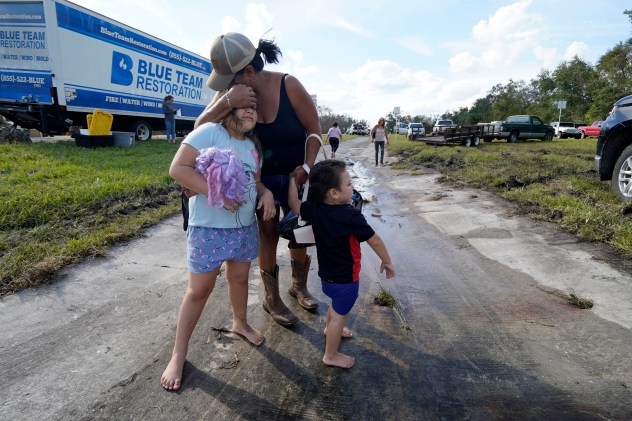 Yolanda Rios, center, holds her grandchildren Ava, 7, and Giovanni, 5, as she waits for an airboat to take them through floodwaters from the Peace River to get to a hospital for medical care in the aftermath of Hurricane Ian on Arcadia, Fla., Monday, Oct. 3, 2022. (AP Photo/Gerald Herbert)

As of early Wednesday morning, around 320,000 customers were without power in Florida, a sharp drop from a peak of 2.6 million outages Thursday morning, according to PowerOutage.US. On Monday, officials in Lee County said that the power outage in Fort Myers Beach could last at least a month. Lee County still had over 180,000 customers without power as of Tuesday evening, with neighboring Charlotte County at around 62,000 outages, nearly a 50% restoration of outages from Tuesday morning's figure of 120,000.

“It's horrible. As they say, it's like a war zone. Everything that you used to know is gone," Alice Barrett, a Fort Myers Beach resident, told AccuWeather National Reporter Bill Wadell. "I mean, there’s very few buildings that are standing. It's hard to imagine. From this beautiful place that you love -- it's all gone. It’s just hard.”

The shocking scenes of destruction hint at how sweeping and long-lasting the impact across Florida will be felt. The economic fallout caused by the storm will be immense, AccuWeather Founder and CEO Dr. Joel N. Myers said -- on par with some of the worst hurricane damage in U.S. history. According to Myers, the total losses caused by Hurricane Ian will amount to between $180 billion and $210 billion in the U.S.

“The economic impact of this storm should not be underestimated,” Myers added. “At $200 billion, that amounts to 1 percent of our national GDP, which is a significant hit on the economy and the entire country and could even be the difference between growth and recession, causing the Federal Reserve to keep from raising interest rates further for the remainder of the year.” 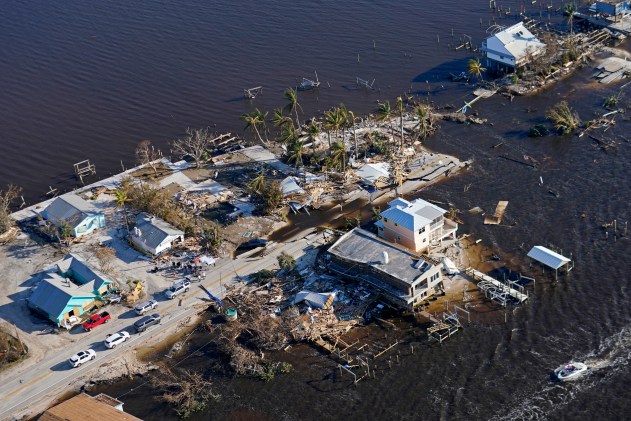 The bridge leading from Fort Myers to Pine Island, Fla., is seen heavily damaged in the aftermath of Hurricane Ian on Pine Island, Fla., Saturday, Oct. 1, 2022. Due to the damage, the island can only be reached by boat or air. (AP Photo/Gerald Herbert)

When Ian made landfall last Wednesday in southwestern Florida, it unleashed relentless wind gusts across the peninsula. The highest official reported wind gust was 128 mph, recorded by a WeatherFlow station in Grove City. However, locally higher wind speeds that weren't officially observed may have also occurred.

Rainfall across the state was staggering, too. In just 24 hours, automated rain gauges reported as much as 31.52 inches of rain near Ponce Inlet, a coastal community northeast of Orlando. Rainfall totals combined with the ferocious storm surge wreaked havoc on barrier islands and areas close to the coast.

In addition to the flooding rainfall and relentless wind Ian brought to the Sunshine State, a cluster of tornadoes touched down over South Florida from Sept. 27 to Sept. 28 — the day before and day of landfall. According to the Storm Prediction Center (SPC), there were 11 confirmed tornadoes across the southern third of the state. Of those, the strongest tornado surveyed by the NWS office in Miami was an EF2 near Kings Point, just south of West Palm Beach.