In a touching TikTok video, little Dominic explains why his heartfelt gesture touched off a lesson in sacrifice. Meanwhile, celebrities were also coming to the aid of those in need.

Donations are pouring in for hurricane-ravaged Florida as numerous charities rally to deploy badly needed relief aid to thousands whose lives were left shattered.

And everyone, it seems, is doing a part -- even 7-year-old Dominic D’Andrea, who knows that every little bit counts. In a heartfelt gesture of generosity, he’s donating the entire $288 that he’s saved up in his piggy bank.

“I was really saving up for a Corvette or an electric scooter, but people need this,” Dominic says in a TikTok video that his mother posted.

In the video, Dominic is seen holding his life savings in a big jar. Mom Jaclyn D’Andrea posted the clip on Wednesday, just hours after Ian made landfall as a Category 4 storm on Florida’s Gulf Coast.

The idea came to Dominic during a car ride with his mom, who became upset upon hearing the news of Ian’s devastation, Jaclyn told CTV News.

That set the wheels in motion and he knew what he had to do. When he got home, without hesitation, he retrieved his piggy bank and told his mother he wanted to give it to those who needed it more.

His dreams of a flashy car or slick and shiny scooter set aside, Dominic said he knew it was the right decision.

“(I’m) sending it to people in need in Florida ... because they had a hurricane… and they need more stuff. Because their house might fall down and they’ll have nothing,” he says in the video. 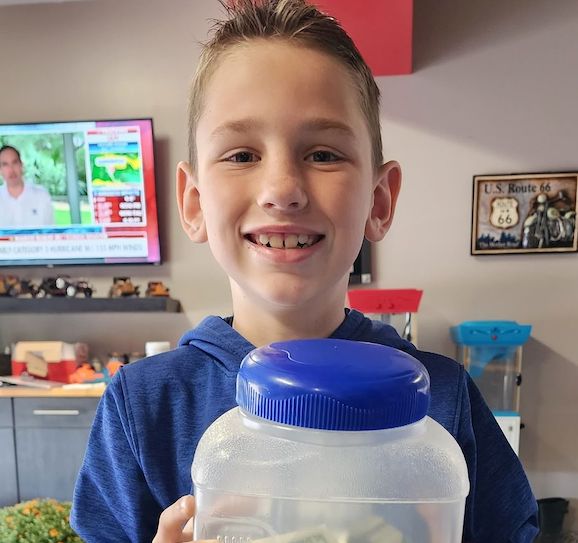 Dominic D'Andrea, 7, of Bourbonnais, Illinois, is donating his entire savings to the relief efforts in hurricane-ravaged Florida. (Jaclyn D'Andrea)

His mother said that off camera her son got “so emotional and choked up” over the suffering people had to endure.

She didn’t mean for it to tug at others’ heartstrings. But tug it did. The 36-second TikTok garnered quite a lot of attention as thousands of people started checking in. Soon the video picked up more than 12,000 “hearts” and nearly 500 shares as of Tuesday.

“God bless u little man,” said one commenter, one of over 200 who left messages on the post.

“Love this little dude! If we all can be this sweet the world would be so much better! Great job Dom!” said another.

“He has me in tears, what a sweet boy,” one woman posted.

The reaction caught Dominic’s mother by surprise. “The whole reason why I posted is just a proud mom moment for my family and friends to see it,” Jaclyn said.

Dominic made his parents so proud that his actions inspired the family to raise even more funds, enough to load up a donated rental truck with supplies that they plan to drive down to Lee County, one of the hardest-hit areas in west Florida. The D'Andrea family lives in Bourbonnais, Illinois, a village about 90 minutes south of Chicago. 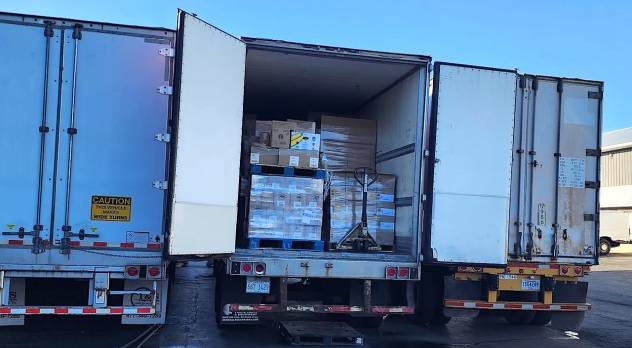 Some of the supplies that are being shipped to Florida thanks to fundraising that started with Dominic D'Andrea's piggy-bank donation. (Jaclyn D'Andrea)

Going with them will be two semi-trucks also filled with supplies, which the family learned late Monday were coordinated through the nonprofit Illinois Partners In Hope, Jaclyn told AccuWeather. Sysco, the wholesale food distributor, also is working with its Florida warehouses to help, she said. And it looks like more help may be on the way as well.

“We have been tremendously blessed,” she said.

The help and supplies come at a critical point in the hurricane's aftermath, with many residents in dire need of assistance.

As of Tuesday, more than 100 U.S. fatalities blamed on Ian have been confirmed, CNN Newsource reported, making it the deadliest hurricane in the state since 1935. Most of those deaths occurred in Florida, as well as four in North Carolina, according to the governor there. The Associated Press also reported three fatalities in Cuba, where Ian struck before hitting the U.S.

Both big and small donations have been pouring in to help with on-the-ground relief efforts.

As of Tuesday, just under 419,000 customers remained without power in Florida, down drastically from a peak of 2.6 million when the hurricane hit, according to PowerOutage.us.

Also donating to the cause was actress and singer Jennifer Hudson, who announced on her show Friday that she has teamed up with building materials supplier 84 Lumber Co. to donate $25,000 to World Central Kitchen and an additional $25,000 to the Red Cross to help their Hurricane Ian relief efforts.

Tampa Bay Buccaneers quarterback Tom Brady and the team’s owners, the Glazer family, kicked off donations among sports teams Thursday when they announced the Buccaneers would be donating $1 million. Brady, who evacuated his family ahead of the storm, pitched in by donating to the Florida Disaster Fund. “Happy were (sic) able to head home for Sunday night, but so many people in Florida won’t be able to do the same,” Brady said on social media. “Our neighbors support us endlessly, it’s time to return the favor.”

The NFL Foundation said it would match the Buccaneers’ $1 million donation, which was followed up by contributions from the Orlando Magic, Florida Panthers and Tampa Bay Lightning Foundation.