'We all have to pull together': Carolinas continue to grapple with Ian's aftermath

North and South Carolina residents trudged on in their cleanup of the storm’s lingering damage, as N.C. Gov. Roy Cooper spoke out Sunday after four lives in the state were claimed to the storm.

Cleanup from the devastation of Hurricane Ian continued across the Carolinas this weekend following its landfall as a Category 1 storm on the South Carolina coast Friday. In the aftermath, North Carolina Gov. Roy Cooper stressed caution during the recovery process after storm-related incidents claimed the lives of four people.

Two men were killed in separate incidents in Johnston County. A 25-year-old man died Friday when he lost control of his vehicle and hydroplaned, striking another vehicle, and a 65-year-old man died Saturday from carbon monoxide poisoning while running a generator in his closed garage, according to officials. In another incident attributed to the storm, a 24-year-old woman died when her vehicle went off a wet road and hit a tree. The fourth fatality involved a 22-year-old man who drowned in a flooded swamp after his truck ran off a roadway in Martin County.

“We mourn with the families of those who have died and urge everyone to be cautious while cleaning up to avoid more deaths or injuries,” Cooper said in an online statement.

Cooper appeared on NBC's Meet the Press news program Sunday morning, addressing the loss of life and damages due to Ian.

“This is a time when we all have to pull together to make sure that people are safe," Cooper told host Chuck Todd. "A lot of times people lose their lives in the aftermath, trying to repair homes, running generators."

What Ian left behind in the Carolinas

The storm left hundreds of thousands without power in North Carolina in the immediate aftermath of the storm, with the outage numbers peaking at 400,000 on Friday. As of Sunday afternoon, the outages were down to just over 15,000 in North Carolina, according to PowerOutage.US. Line workers were able to restore power to more than 119,000 customers across the state between Saturday and Sunday morning after Ian's approach on the state.

The state's northern neighbor, Virginia, was also hit by Ian's impacts and was down to just under 8,000 power outages Sunday afternoon.

The New York Times reported Sunday that damage assessment teams were looking at wreckage in South Carolina beach communities. In the coastal community of Pawleys Island, South Carolina, about 70 miles north of Charleston, residents cleared debris from their yards Saturday afternoon with pitchforks, and some pieced together docks that were torn apart by the storm. The Pawleys Island pier was also severely damaged by the storm.

One Pawley's Island resident, Steve Smith, told the Greenville (South Carolina) News that Ian's impact was "bad," but still paled in comparison to the damages caused by Hurricane Hugo in 1989. 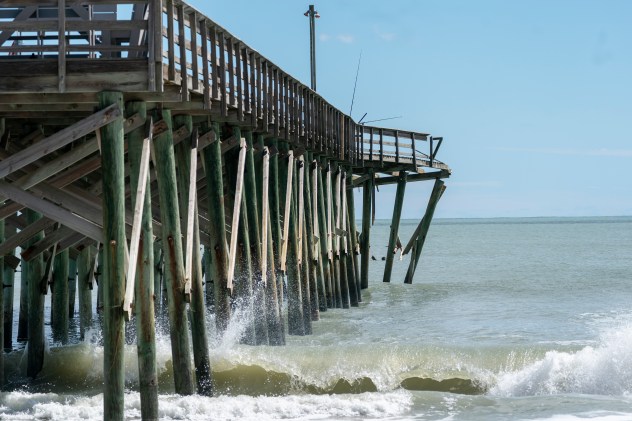 A section of the Pawleys Island pier was lost in the effects from Hurricane Ian, Saturday, Oct. 1, 2022, in Pawleys Island, S.C. (AP Photo/Alex Brandon)

In Litchfield, South Carolina, rescue crews had to trudge through waist-deep floodwaters to reach residents and pets. In Myrtle Beach, Mayor Brenda Bethune told AccuWeather in an interview on Friday that the storm surge came up “quite high,” and a full assessment of the damage in Myrtle Beach was expected to take place on Saturday.

“As far as structural damage, we know of one hotel that lost a roof. Our first responders did have to help evacuate the people that were staying there and we know that another business lost their roof,” Bethune said. 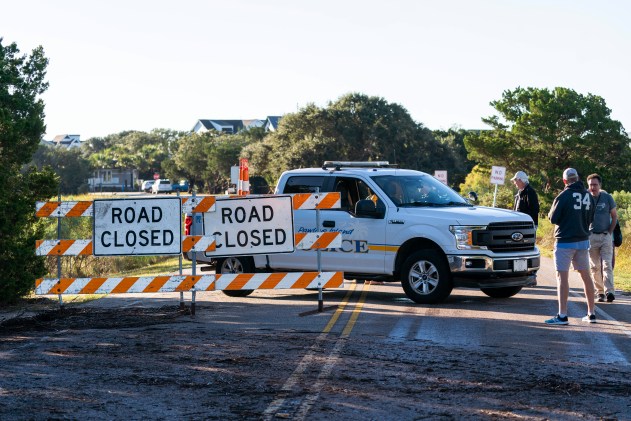 Ian, which quickly downgraded to a tropical rainstorm, worked its way up the East Coast and inland Saturday, dousing Virginia and the Washington, D.C., area with heavy rains. Broken utility poles and power lines were part of the damages in the area, causing widespread power outages. Kevin Songster, managing partner of Mia's Italian Kitchen in Alexandria, Virginia, told the Washington Post that the "misty" conditions ultimately caused no issues for his restaurant. “The water was probably six inches deep on the street across from us, but it didn’t make it over,” Songster said.

A bevy of weather advisories remained in effect midday Sunday, ranging from the Outer Banks of North Carolina up to the southwestern corner of Connecticut.

AccuWeather meteorologists have been tracking a new, non-tropical storm off the east coast of the United States, fed in part by Ian, that they say will bring more severe weather risk from Virginia to Long Island. Comprised of pieces leftover by Ian, the storm will raise winds to near damaging levels in some communities, forecasters say.