The newly formed tropical depression is one of two new significant candidates for tropical development in the Atlantic basin this week, and although neither budding storm poses any immediate threat to the United States, at least one will drift westward across the Caribbean Sea and bears watching for potential adverse conditions, AccuWeather meteorologists say.

Tropical Depression 12 could become the next named storm of the Atlantic hurricane season, but it’s not expected to be a threat to land.

The developing system that has had AccuWeather meteorologists' interest since early last week when Ian was brewing over the Caribbean is a tropical wave that was moving westward on Tuesday toward the Windward Islands. Over the weekend, the NHC dubbed the tropical wave Invest 91L in order to step up investigative measures. 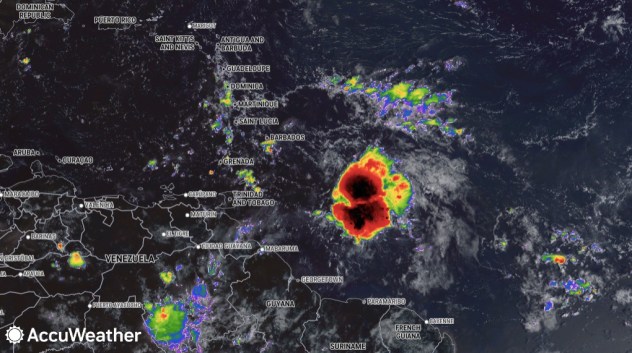 Robust thunderstorms were erupting near the center of a strong tropical wave just east of the Caribbean Sea on Tuesday, Oct. 4, 2022. (AccuWeather Enhanced RealVue™ satellite)

The tropical wave was located a few hundred miles to the east of the southern Windward Islands and was drifting westward. On Monday, clouds associated with the disturbance were showing some weak spin on satellite imagery. On Tuesday, there was a substantial eruption in thunderstorm activity near the center of the system. Both could be the early signs of organization, forecasters said.

The development potential for this system will vary through this weekend. "There is a window through midweek for the system to organize and strengthen," AccuWeather Chief On-Air Meteorologist Bernie Rayno said. "Into Wednesday, disruptive wind shear will remain low."

Wind shear is the presence of stiff breezes that blow from one direction. When strong, wind shear can disrupt the development of tropical systems or cause them to weaken. 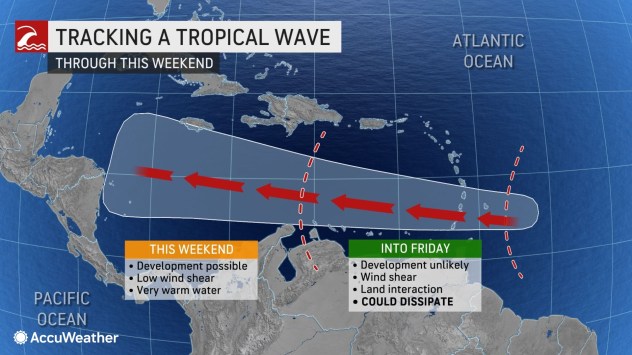 During the middle and latter part of the week, wind shear will increase as the system moves across the eastern and central Caribbean.

"A storm in the upper atmosphere near the Leeward Islands appears as though it will extend southwestward as the week progresses. This action will cause wind shear to increase near the system, which could keep it from developing at all or prevent it from strengthening significantly," Rayno said.

Any development of 91L over the next few days is likely to be minimal and not supportive of a rapidly developing hurricane.

The system's proximity to South America may be another deterrent in its development during the middle and latter part of this week. However, as it moves westward an uptick in drenching showers, gusty thunderstorms and choppy seas will occur from west to east across the islands and coastline of the southern Caribbean.

"If the system fails to develop this week or perhaps has acquired tropical depression or storm status, there may be more favorable development conditions once it enters the southwestern Caribbean," AccuWeather Senior Meteorologist Adam Douty said. "Waters are extremely warm in that part of the Caribbean, and it is possible that strong wind shear may ease by the weekend."

A pathway to the north appears as though it will remain blocked by high pressure into this weekend, unlike steering breezes that allowed Fiona and Ian to change direction. As such, it is unlikely to be a threat to the U.S. or northern portions of the Caribbean. However, on occasion, strong tropical systems can overcome roadblocks in their paths by altering the atmospheric environment around them. Due to physics, intense tropical systems can track farther to the north or turn to the right more so than weak tropical systems. 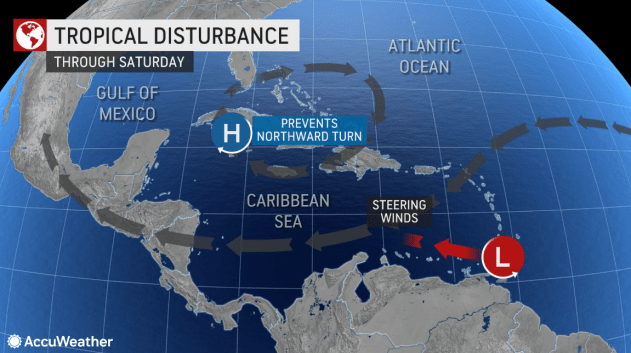 "However, due to the atmospheric roadblock to the north, interests in Central America will need to monitor the progress of 91L as it drifts westward through the weekend," Douty said. Even a weak tropical system could bring tremendous rain and the risk of flooding and mudslides to parts of Central America this weekend.

A tremendous amount of changes in other weather systems or significant strengthening of 91L would have to take place to allow the system to move northward through at least Saturday.

"Only if a dip in the jet stream was to extend across the Gulf of Mexico and into the northern Caribbean might there be a chance for the system to turn northward and potentially threaten the U.S.," AccuWeather Lead Long-Range Meteorologist Paul Pastelok said. There is no indication of this happening just yet.

Thousands of miles farther to the east, a cluster of heavy showers and strong thunderstorms from Tropical Depression 12 took shape just off the coast of Africa. 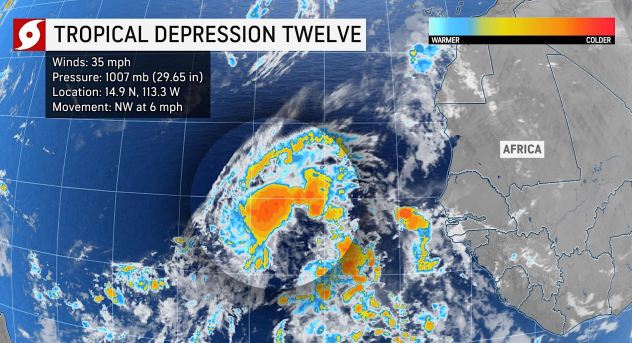 The depression was about 480 miles west of the Cabo Verde Islands, had maximum sustained winds of 35 mph and was moving northwest at 8 mph. 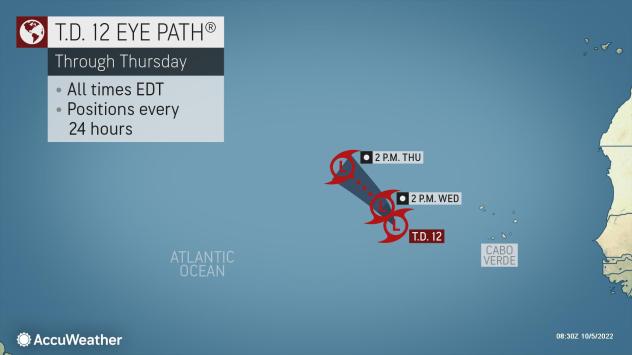 It is possible the system will spend its entire active life over the central Atlantic. The next two names on the list that forecasters are using to name storms for the 2022 season are Julia and Karl.

AccuWeather meteorologists continue to monitor part of what was once Hurricane Ian along the mid-Atlantic coast. Hostile atmospheric conditions over land caused what was left of Ian to break up and dissolve as drenching rain and chilly winds developed over the central Appalachians and mid-Atlantic this past weekend.

A new storm of non-tropical nature was spinning up along the mid-Atlantic coast and will prolong drenching rain, coastal flooding and beach erosion from North Carolina to southern New England into Wednesday.

There is a very low chance that this nor'easter may acquire some tropical characteristics while moving over the warm waters of the Gulf Stream as it moves out to sea during midweek. Wind shear is likely to increase toward the middle of the week, so it is highly unlikely to evolve into a tropical or subtropical depression or storm.

As of Oct. 3, the Atlantic has racked up an Accumulated Cyclone Energy (ACE) value of 79.2, according to Colorado State University. This parameter tallies up the intensity and duration of all tropical storms and hurricanes in a season. Prior to Fiona and Ian, ACE in the Atlantic was lagging well behind the average pace. The normal through Oct. 3 is about 98.

Hurricane season officially extends through Nov. 30, and there are likely to be at least a few more tropical storms and hurricanes in the coming weeks.

More to read about Ian: