The storm, fed in part by energy left over from Ian, not only threatens to unleash damaging winds and flooding rain but also significant coastal impacts from southeastern Virginia to Long Island.

After leaving behind a deadly path of destruction from Florida to North Carolina, Ian finally met its demise over the mid-Atlantic late Saturday as it contributed to a raw and miserable start to October. Now, AccuWeather meteorologists continue to track a new, non-tropical storm off the east coast of the United States, fed in part by energy from Ian, that they say will continue bringing pounding surf, coastal flooding and windswept rainfall from North Carolina to Massachusetts.

This storm will have a three-prong effect, according to forecasters. In addition to raising winds to near damaging levels in some communities, the storm will also enhance rainfall along the coast and prolong above-normal tides and their effects. 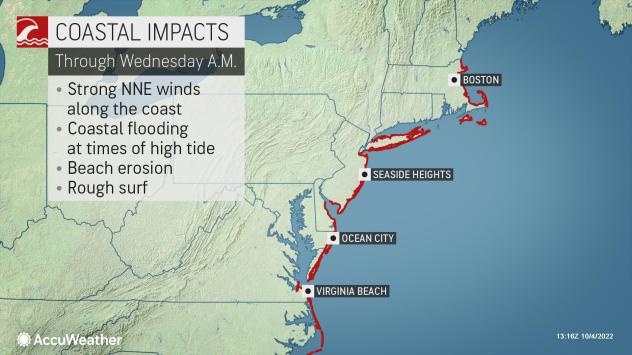 The breadth of the storm's impacts was evidenced by the sheer array of weather advisories that were in effect Tuesday morning from the southwestern corner of Connecticut to the Outer Banks of North Carolina. The alerts ranged from coastal flood warnings to small craft advisories and high wind alerts.

"A prolonged stretch of strong and gusty east to northeast winds will pound many beaches along the Northeast and mid-Atlantic coasts into midweek thanks to the storm offshore," AccuWeather Senior Meteorologist Dan Pydynowski said.

An area of high pressure to the north will combine forces with the coastal storm, helping to funnel high winds and shove more water into beach communities.

"This can lead to beach erosion and some coastal flooding around times of high tide. There is a bit of good news during this stretch in that the moon phase is such that it will not further enhance tidal flooding," Pydynowski said. 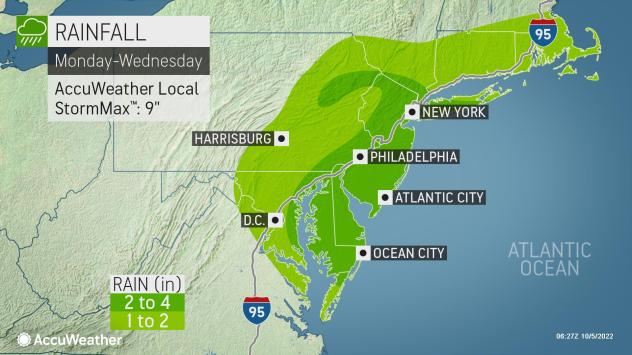 "Areas prone to taking on water during wintertime nor'easters such as Wildwood, New Jersey, and Norfolk, Virginia, will likely experience similar conditions through the first half of this week," AccuWeather Senior Meteorologist Alex Sosnowski said. "As the new portion of this storm strengthens and pivots westward for a time, coastal flooding problems could worsen before they improve with the storm heading out to sea at midweek."

The farther north along the coast, such as in eastern Massachusetts, the lesser the likelihood of coastal flooding and beach erosion as this region will be farther removed from the storm's strongest winds. However, there can still be dangerous surf conditions affecting these beaches.

AccuWeather meteorologists expect winds to gust 40-60 mph along the immediate coastline from New Jersey to the Chesapeake Bay and Virginia Tidewater regions. These gusty conditions can blow down trees and power lines and result in some communities being left without electricity.

Locations that receive a soaking rainfall during the stormy stretch may be at a greater risk of experiencing some extent of damage due to the wind. Trees sitting in saturated soil have an even higher likelihood of toppling over even in a moderate wind gust.

Factoring in the rain and wind, AccuWeather RealFeel® Temperatures can dip into the 40s and even the 30s at times, a likely reminder to people who live in the region that Old Man Winter is not that far away, according to Sosnowski. 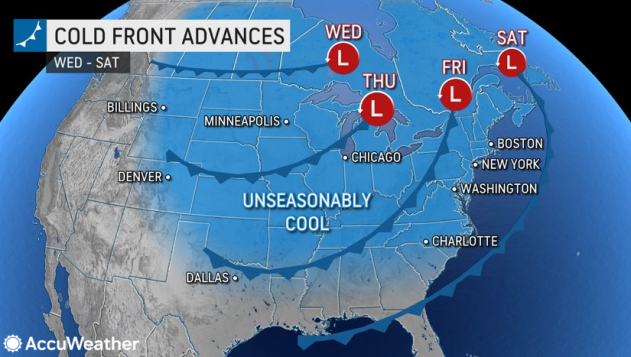 An advancing cold front, one of the most potent of the season thus far, is likely to finally push the coastal storm out to sea Wednesday into Thursday. Forecasters say this push of chilly air may bring the first snowfall of the season for parts of northern New England.