Torrential downpours and potentially damaging winds will extend from Texas to Florida in the coming days, causing travel disruptions and enhancing the risk for tornadoes.

A record-setting bomb cyclone that wreaked havoc across the Western states over the weekend is far from finished unleashing hazards as it moves across the United States. As the storm shifts eastward across the central and southern U.S., severe weather could erupt across a dozen states, putting approximately 30 million people at risk.

The new round of severe weather follows more than a dozen tornadoes reported across three Central states on Sunday night. One of the hardest-hit areas was situated more than 80 miles south of St. Louis, where an EF3 tornado touched down near Fredericktown, Missouri.

AccuWeather forecasters say that with the severe storms already triggered this month and the volatile pattern developing, the October record for the number of tornadoes in the U.S. will be in contention.

After weakening a bit while navigating the Rocky Mountains on Monday night, the storm system is expected to strengthen into midweek, setting the stage for potentially damaging thunderstorms.

The threat of severe weather will include the potential for tornadoes, some of which can occur well after dark and can heighten the danger factor. However, even if only a handful of tornadoes strike, powerful wind gusts ranging from 40-60 mph may be fairly common with an AccuWeather Local StormMax™ of 80 mph anticipated through Thursday evening. Winds of that magnitude will be capable of causing considerable damage to the siding of homes, roof shingles, mobile homes and unsecured objects. 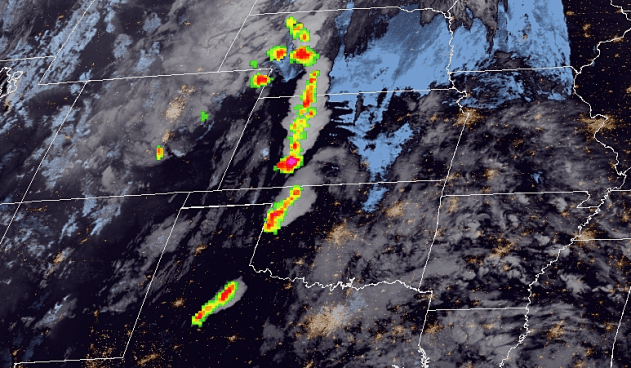 Thunderstorms over the central U.S. early Tuesday night. The colors show where frequent lightning has been detected by the GOES-EAST weather satellite. (Image/NOAA)

As the line of storms with heavy, flooding rain and gusty, potentially damaging winds pressed eastward Wednesday midday, tornado watches were issued for portions of Louisiana and eastern Texas. Individual severe thunderstorms that erupted ahead of the line spawned several reports of tornadoes and multiple reports of damage in Orange County, Texas.

Dramatic footage from the county showed a tornado tearing across Interstate 10. Powerlines sparked, and an ATV was even spotted flying amid the debris. 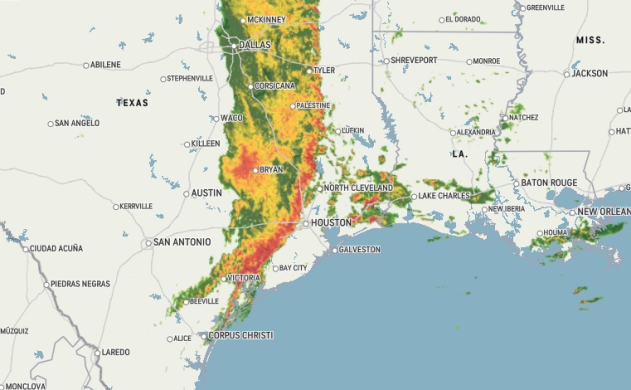 As the storms roared through the Houston metro area during the midday hours on Wednesday, winds gusted to near 50 mph in some communities and between 0.50 of an inch and 1 inch of rain fell in about an hour's time. Meanwhile, in Lufkin, Texas, thunderstorm winds knocked down power lines in the downtown area at midday.

Severe weather risks will persist and continue to shift eastward across part of South Central states and along the Gulf Coast during the day Wednesday. And an added ingredient will join the factors helping to trigger severe weather, according to Bauer. Energy from former Hurricane Rick, which hit Mexico as a Category 2 storm early this week, will also come into play.

The risk of storms capable of unloading torrential rain, strong winds and tornadoes will extend from southern Arkansas, southward to the upper part of the Texas coast and eastward across Louisiana on Wednesday. The area at greatest risk for tornadoes is likely from Port Arthur, Texas to Baton Rouge, Louisiana, into Wednesday evening. 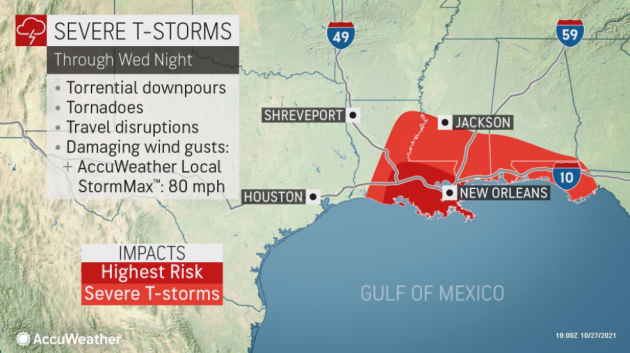 Cities at risk for severe thunderstorms and flash flooding during Wednesday afternoon and evening include New Orleans, Shreveport, Alexandria, Lake Charles and Monroe in Louisiana.

During Wednesday night, the threat of severe weather is likely to move eastward along the central Gulf Coast and across the Florida Panhandle. 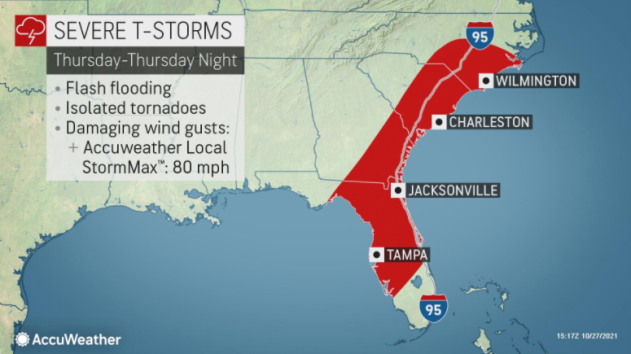 One last gasp of severe weather is possible on Thursday in the southeastern corner of the country. Storms on Thursday will carry the risk of high winds, flash flooding, isolated tornadoes and waterspouts from eastern North Carolina to central and northeastern Florida with an AccuWeather Local StormMax™ of 80 mph.

Severe weather is not highly unusual for the southern U.S. during the autumn, since there is still plenty of warm and humid air available from the Gulf of Mexico. At the same time, a strengthening jet stream across the northern tier can dip southward periodically as chilly air from Canada pushes into the country. The clashing air masses create a battleground for severe thunderstorms to ignite.

"From the last week of October into early November, there is a higher probability of severe weather in the eastern Red River Valley into the lower Mississippi Valley, which is roughly where damaging and dangerous storms erupted through early Wednesday," AccuWeather Meteorologist Joseph Bauer said.

The number of tornadoes thus far this month is on a record pace, and severe thunderstorms that fire this week may put October 2021 in the top spot for twisters, AccuWeather Meteorologist Mary Gilbert said.

Four more tornadoes would have to touch down in order for the record to be broken, and given the pattern into Thursday, this is well within reach. As of Wednesday morning, 119 preliminary tornado reports have been tallied by the Storm Prediction Center this month. The standing October record of 123 tornadoes was set just a few years ago in 2018. 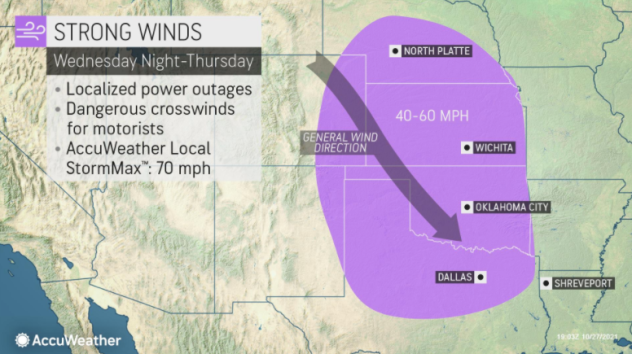 Should a single tornado strike a populated area or cross a highway, there is the potential for significant loss of life and devastation. AccuWeather forecasters urge people in the path of severe weather to have a way to receive weather bulletins before going to sleep at night or when on the road.

In the wake of severe weather, high winds with a StormMax™ of 70 mph are expected to howl across the eastern slope of the Rockies to the central and southern Plains from Wednesday night to Thursday.

Halloween forecast: A trick or a treat? Depends where you are