After all the rain and snow over the weekend, officials are cautiously optimistic about whether the parade of storms will stand as an omen for more rain -- or if the season's "wildcard" will exacerbate parched conditions.

Even with a drenching start to the wet season in the west, experts say it will be a challenge for reservoirs to recover from historic low levels.

The onslaught of storms and bomb cyclones over the weekend kicked California's rainy season off on a high note for those praying for rain, but the state's water officials remain cautiously optimistic as to whether the storms stand as an omen for more rain to come or if the season's "wildcard" will exacerbate the drought.

After a scorching summer, experts say it would take 7 to 10 inches of rainfall to get the soil damp enough to provide runoff to depleted reservoirs such as Sonoma County's Lake Mendocino. It would take more than two feet of rainfall by the end of December to end the ongoing drought in the area by the end of the year. A turn toward a dry winter could "tremendously" impact the surrounding communities.

Lake Mendocino is one of two major water supply reservoirs for the North Bay Region of California, with roughly 600,000 people relying on it and Lake Sonoma to store the water supply. It contributes to water for drinking, flood protection and even supplying water to endangered species of fish in the Russian River Watershed. However, you would hardly be able to tell that just by looking at its current state.

"You're not going to see a lake, my friend," Brad Sherwood, Assistant General Manager at Sonoma County Water Agency told AccuWeather National Reporter Bill Wadell. "What you're going to see is a small creek running through an earthbound dam." 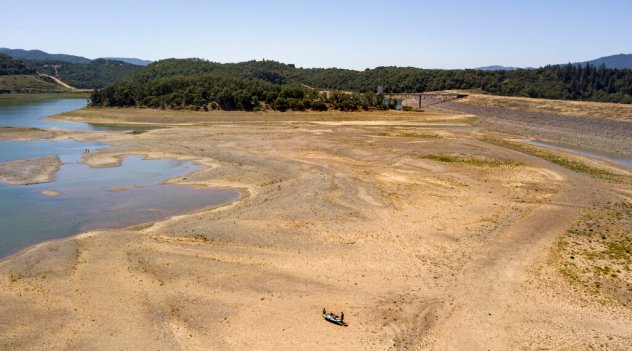 Kayakers make a long trek to the water's edge at a drought-stricken Lake Mendocino at 29% of normal capacity, in Ukiah, Calif., Sunday, May 23, 2021. (AP Photo/Josh Edelson)

The capacity of Lake Mendocino on Friday, Oct. 22 was at 21% -- the lowest it has ever been on that date -- following a summer of both extreme heat and extreme drought.

"It's definitely one of the worst-case scenarios happening now in California," Sherwood said.

Back in April, California Gov. Gavin Newsom declared a local drought emergency in Mendocino and Sonoma counties while standing on the parched, cracked bed of Lake Mendocino. Normally, there should have been 20 to 40 feet of water where he was standing at that time. Instead, the lake had been at about 40% of its storage capacity, according to The Associated Press. Then the dry season hit hard. 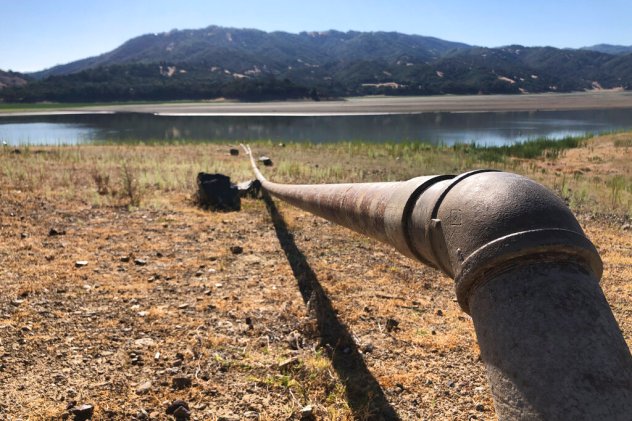 A pipe runs to Lake Mendocino near Ukiah, Calif., on Wednesday, Aug. 4, 2021. Tourists flocked to the picturesque coastal town of Mendocino for its Victorian homes and cliff trails, but visitors last summer also found public portable toilets and dozens of signs on picket fences announcing the quaint Northern California hamlet: "Severe drought please conserve water." The town of Mendocino gets some of its water from the reservoir, but most of the lake water goes to Sonoma County. (AP Photo/Haven Daley)

"This past year was year two of a drought, and not only that, but it became a record-setting drought in that 2020 to 2021 was drier than our previous two-year low point of '76 to '77," California Department of Water Resources State Climatologist Dr. Michael Anderson told Wadell. "But a footnote to that is that it is also a lot warmer. So not only do you have the lack of water, but you have the added heat creating more demand both on the landscape as well as the communities."

He added that studies over the past decade have shown evidence that "soils are drying out much more than we had thought they even could," leading to a recalibration in how scientists model hydrology, now with the understanding that the landscape could dry out even more than they thought it could.

"We find ourselves now in this kind of uncharted territory," Anderson said. "A new world where not only are we trying to keep track of how wet or dry it is, but how warm it is as well and trying to figure out how that warming compounds the impacts of the dryness." 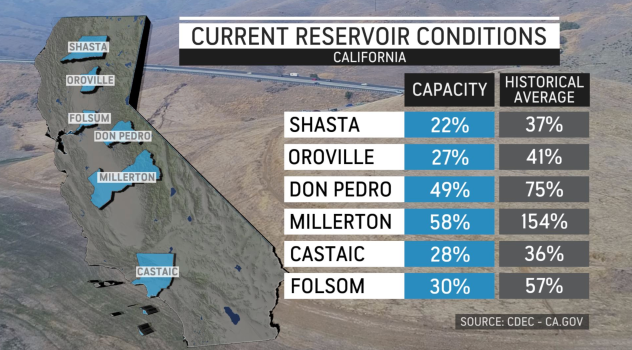 Water levels at several key California reservoirs remained well below historical averages even after a parade of storms drenched the Pacific Northwest in recent days.

This season, La Niña conditions will make for a "highly variable" season that could range from seeing a winter with plenty of precipitation to the area drying out.

"We have highly variable conditions and what we're left with is great uncertainty," Anderson said.

This pattern serves as the "wildcard" for Northern California. Sherwood warned that if the Russian River Watershed didn't see average to above-average rainfall this year, the lake could potentially dip to drastically low levels -- to the point where a creek might not even be running through it.

"That would have tremendous, tremendous cause-and-effect for the upper Russian Watershed and those communities that specifically rely on Lake Mendocino for much of their pumping and water supply needs," Sherwood said. "Bottom line is we need here in Sonoma County, 7 to 10 inches of rainfall just to get our soil wet enough to provide runoff into our reservoirs." 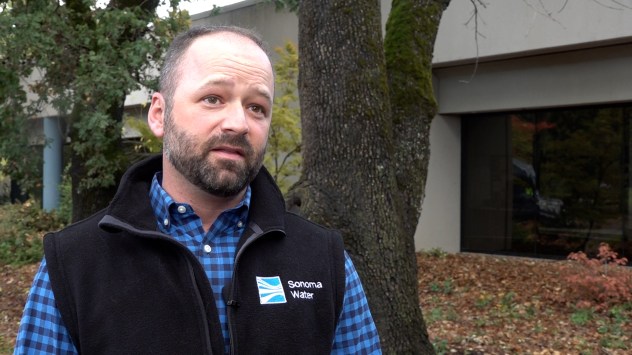 Brad Sherwood, Assistant General Manager at Sonoma County Water Agency, tells AccuWeather National Reporter Bill Wadell that a minimum of 25 inches of rainfall by the end of December would be enough to pull the area off of the drought by the end of the year. (Bill Wadell)

He added that a minimum of 25 inches of rainfall by the end of December would be enough to pull the area out of the drought by the end of the year. Some models show that it would take more than 140% of average precipitation this winter just to get average runoff back into the reservoirs. However, large-scale events like bomb cyclones can walk the line between beneficial and hazardous.

"This is where we pivot from benefit to hazard," Anderson said. "At a certain point you want water back on the landscape, but you'd like it to come at a little more measured pace. When you get it all at once in a monster event, you transition to hazard where you see a lot of that water running off rather than soaking in, leading to river flows just jumping."

Whichever way the season goes, with plenty of precipitation or storms far and few between, Anderson stressed that people in California should continue to incorporate water conservation practices into their daily routines.