After years of global warming taking a toll on the glacial ice in Norway, a team of researchers has unearthed the final piece of a rare discovery in Norway that was originally made in 2014 -- a 1,300-year-old ski that matches with one previously found, making a complete set.

The wooden skis were uncovered by a team of field researchers called "The Secrets of the Ice." The team investigates ancient discoveries as global warming impacts the Earth and melts away glacial ice, allowing new artifacts to be revealed slowly.

The first ski was dug out of the ice in 2014, AmazeLab reported. It was located in the Digervarden Ice Patch, located in southern Norway. The ice at the time was too thick for the archaeologists to search for and retrieve the second ski. But since that discovery, global warming has taken a toll on the ice patch, and the ice has since receded. 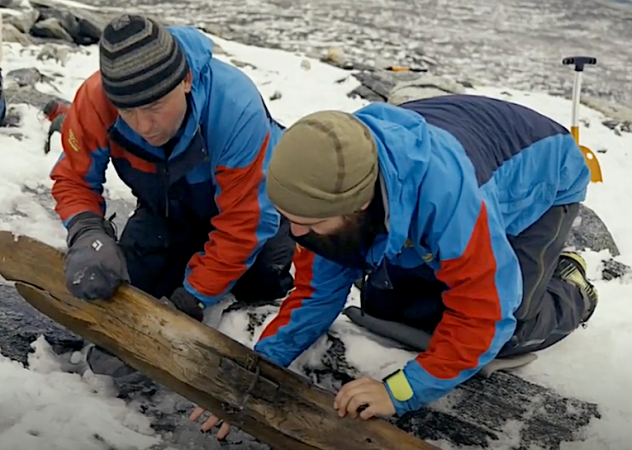 After the first ski was found, researchers monitored satellite imagery to examine the ice in the area, and an in-person survey was conducted in 2016, according to Smithsonian Magazine.

Once the ice melted enough, archeologists were able to retrieve the second ski, making it the oldest set of skis ever recovered on Earth and, according to Smithsonian Magazine, one of the best-preserved as well.

The skis are 73 inches long, making them just over six feet and seven inches wide. The ski that was recently discovered is slightly longer than the one uncovered in 2014 because it was preserved better by the ice patch.

Both skis include leather straps, birch bindings and a wooden plug for the footholds. Archeologists believe the wooden plugs for the footholds were designed to make the skis easier to drag through the snow when they were not being used. They appear to have been repaired at one point as well. 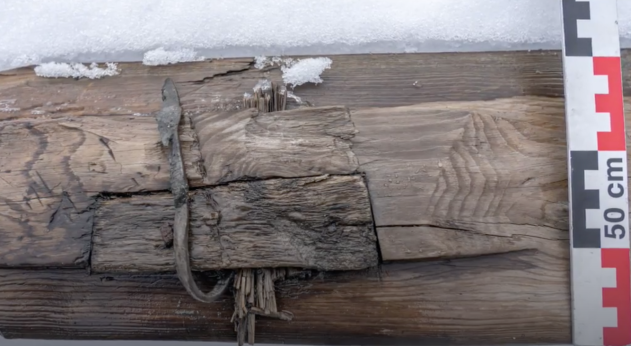 The ancient skis, which are 1,300 years old, are each more than six feet in length and seven inches wide. (SWNS via AmazeLab)

“The skis are not identical, but we should not expect them to be,” Lars Pilø, an archaeologist with the Glacier Archaeology Program (GAP) in Norway, said. “The skis are handmade, not mass-produced. They have a long and individual history of wear and repair before an Iron Age skier used them together and they ended up in the ice.”

According to experts, the skis were probably used by a hunter that tracked reindeer across the area, a traveler or both. The skis are believed to have been left in the spot they were unearthed, potentially as a tactic for the hunter to mark his location with them, as one was damaged. Another theory is that they were carried into the area from an avalanche after getting separated from their owner.

“The [discoveries] show that the high mountains of southern Norway were not remote areas, devoid of outside contact,” Pilø told GlacierHub.

For the latest weather news check back on AccuWeather.com. Watch the AccuWeather Network on DIRECTV, Frontier, Spectrum, fuboTV, Philo, and Verizon Fios.AccuWeather Now is now available on your preferred streaming platform.