Areas from the mid-Atlantic to the Plains and Gulf Coast will be at risk for potentially severe thunderstorms that could produce tornadoes and set a new monthly record this week.

Millions of people will be at risk from severe storms throughout the southern and northern Plains, featuring damaging winds, hail and the potential for tornadoes.

AccuWeather forecasters say several portions of the United States will have to gear up for rounds of dangerous storms as a busy weather week unfolds across the country.

On Sunday, at least 15 preliminary tornado reports were submitted to the Storm Prediction Center (SPC). According to these reports, which largely came in from Missouri, the potential twisters tore up trees, brought down power lines, damaged structures and completely destroyed several homes.

The same storm that spurred those tornado reports also brought heavy rain and strong winds to much of the Mississippi River Valley before it shifted east on Monday into the Appalachian Mountains.

While the atmospheric setup for severe weather on Monday was not quite as impressive as Sunday's setup, all of the ingredients needed for damaging thunderstorms came together, AccuWeather Meteorologist Brandon Buckingham said.

Conditions will be ripe for severe weather again on Tuesday, and explosive storms can begin to develop as early as the late afternoon. Tuesday's area of risk is forecast to encapsulate a large swath of the Plains from eastern Nebraska all the way into central Texas.

October has already been a very active month in terms of tornadoes and may even turn out to be record-breaking, according to AccuWeather Meteorologist Randy Adkins.

The record for most confirmed tornadoes in the month of October across the U.S. currently stands at 123 from 2018. As of Tuesday morning, the preliminary tornado count for the month stands at 118. With isolated tornadoes possible again on Tuesday and Wednesday, it's certainly possible that the record will fall.

The severe weather hot spot on Monday focused on the spine of the Appalachians from southeastern Pennsylvania through North Carolina. From Monday afternoon through Monday night, numerous reports of strong winds from thunderstorms were submitted across the sector but no confirmed tornadoes, according to the Storm Prediction Center. Residents across North Carolina, Virginia, Maryland and Pennsylvania described trees damaging rooftops, blocking roadways and even taking down electric wires.

Through Tuesday the severe thunderstorm threat will no longer be focused on the eastern United States. Rather, a different threat will develop for the Northeast and mid-Atlantic as the first true nor'easter of the season roars to life off the Atlantic coast.

Several major metropolitan areas including Oklahoma City and the Dallas-Fort Worth metroplex are currently forecast to be for some of the strongest storms Tuesday evening through Tuesday night. Nearly 9 million currently live in an area of the central U.S. that is currently being highlighted by the SPC as a slight risk for severe thunderstorm development on Tuesday, while roughly 3 million are facing an enhanced risk of severe storms. An enhanced risk is one category higher than a slight risk.

Hail will be the primary threat with any strong storms that roar to life in Nebraska. Farther south, all types of severe hazards will be in play, according to AccuWeather Meteorologist Joe Bauer.

These hazards include hail, torrential rainfall, tornadoes and damaging winds with an AccuWeather Local StormMax™ of 80 mph. 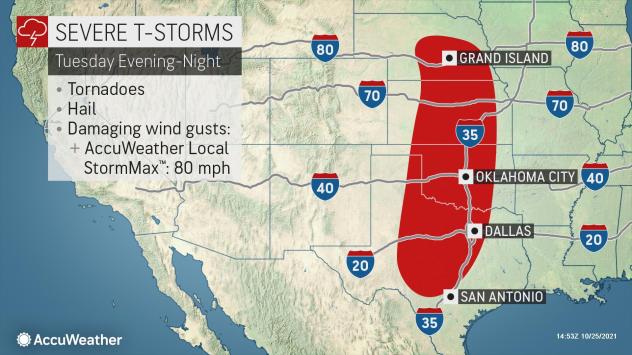 The bulk of Tuesday's activity is forecast to continue after sunset and through the overnight hours, which can present additional risks for people in the affected areas. Forecasters are urging residents to have multiple ways to receive critical weather warnings and to take any warning very seriously, as these warnings are meant to save lives.

As the weather pattern continue to ramp up Tuesday evening, a line of storms is expected to form and move its way east-southeast through central Texas with damaging winds and heavy rain becoming the main concerns Tuesday night for cities such as Dallas, according to Bauer.

The strongest storms through Tuesday night are forecast to have the potential to spin up tornadoes, with multiple tornadoes possible throughout the duration of the night.

The threat of severe weather will not end on Tuesday night, as a different region will find itself in the clutches of Mother Nature's wrath on Wednesday. 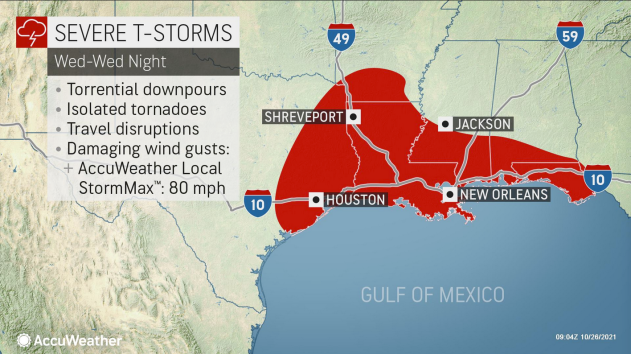 Cities that may fall into the area at greatest risk for damaging storms on Wednesday include Houston, New Orleans, Mobile, Alabama, and Jackson, Mississippi.

"Isolated tornadoes, high winds and local flash flooding all look to be on the table Wednesday," Bauer said.

Across the Gulf states, the strongest storms can bring damaging wind gusts with an AccuWeather Local StormMax™ of 80 mph.