A hiker was “awestruck" when she witnessed a breathtaking sight -- which she captured on video -- and said she felt like the fleeting natural wonder "was a gift just for me."

A hiker in Olympic National Park, Washington, captured this bizarre rainbow halo illusion on Oct. 11. This is called a Brocken specter. It occurs when light shines on mist to create a halo of rings.

Nikki Klein was having a less-than-pleasant day when she decided to venture out to Hurricane Ridge in Olympic National Park, leading her directly into a "magical" encounter the likes of which she had never experienced before.

Klein resides in Santa Clarita, California, but lived on the Olympic Peninsula in Washington state for the first 30 years of her life and grew up with Olympic National Park as her backyard. She was visiting her dad in Port Angeles, Washington, when she was having a "pretty crummy morning." To relax, she decided to go enjoy some time out exploring nature.

"I went up to the mountains to just kind of wash the crumminess of the morning off me," Klein told AccuWeather. 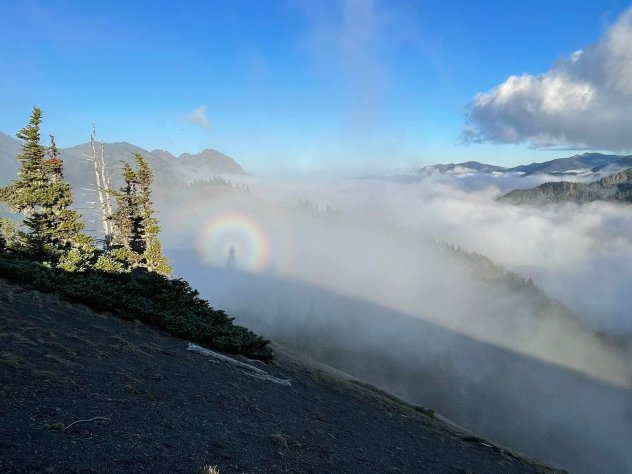 A brocken spectre was captured among the clouds on Hurricane Ridge in Olympic National Park in Washington state on Oct. 11, 2021. (Facebook / Nikki Klein)

She sat for a while in a meadow watching the clouds roll by before deciding to walk up to a mountainous area known as Hurricane Ridge. The sun was beginning to go down, and when she arrived, she eventually met another hiker and spent some time chatting with him. It was then that the other hiker pointed out what looked like a rainbow.

"I turned around and said, 'What in the world is that?'" Klein recalled in an interview with AccuWeather. "I've never seen anything like it before." 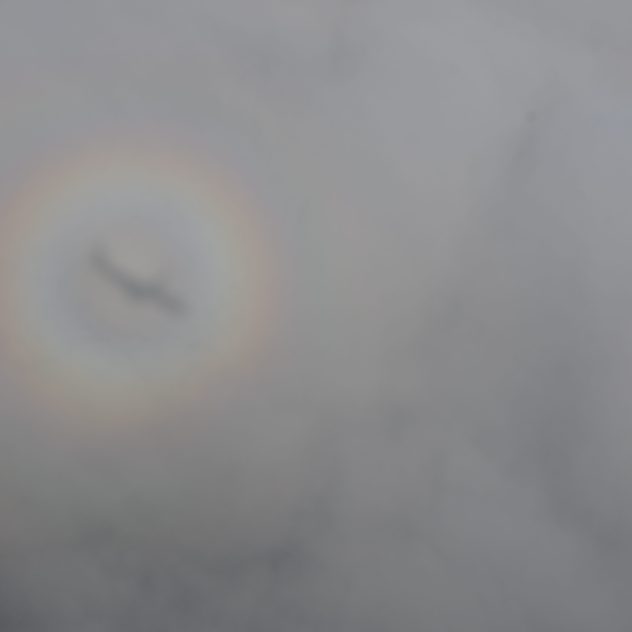 A "pilots glory" seen on a flight from Seattle to Philadelphia on Oct. 8, 2021. The outline of the airplane can be seen in the middle of the glory. (Nicole LoBiondo)

A glory is a sequence of colored rings that resemble a rainbow framing the shadow of the observer on a cloud made up of many small water droplets. On very rare occasions, a glory can occur on dew instead of a cloud.

For a glory to occur and be witnessed, AccuWeather Meteorologist Nicole LoBiondo said, the sun must be behind the observer, and fog or water droplets must be located below the observer's horizon. The sunlight is then refracted by the water and fog droplets.

"You need fog or a thin cloud below your position in order to see a glory...but clear and dry [weather conditions] where you stand," LoBiondo said.

While the breathtaking sight may be an unusual one, LoBiondo said, it can actually occur rather frequently, and most often can be seen from airplanes.

LoBiondo said a higher elevation is key in witnessing a glory, which is why reports of the phenomenon happen most frequently on airplanes. A Brocken spectre typically does not occur on ground level, so in order to see one, a person must be on a higher elevation, such as a mountain, like the one seen in Klein's video. At its highest point, Hurricane Ridge has an elevation of 5,242 feet.

"There was a moment that it was a little alarming, and then I moved and realized it was my shadow," Klein said of the experience.

Klein shared the video and photos she took of the glory on Youtube. One thing that could only be captured by a firsthand experience was the size of the glory, which Klein said did not show up clearly on camera. The size got bigger and smaller as the mist got denser and more sparse, but the projection was "massive" and Klein said her shadow on the other mountain probably stood around 100 feet tall.

"I spend so much time on the tops of mountains hiking and out in the wilderness, and to never have seen anything like that ever in my whole life...it was just the right time and the right place and it was so magical," Klein said. "It felt like a gift."

Despite being an avid hiker and a snowboard instructor at Mammoth Mountain, Klein has never seen a glory prior to this experience and didn't even know what it was.

"Almost every time I go out I see something that I've never seen before," Klein, who recently hiked the entire John Muir Trail in the Sierra Nevada, said. The trail is more than 200 miles long and she hiked it on her own. "Almost every day you can witness something that almost nobody will ever see in their whole life."

She was quick to document the sight as fast as possible because she thought it would only last for a second, but it ended up lasting for around 30 minutes. She said looking back, she isn't sure that people would have believed her experience had pictures of it not existed. She said that the ability to witness the glory in person felt like a "gift" made just for her.

"I know that it is an easily scientifically explained phenomenon, but it really felt like it was a gift just for me," she said. "I really like the quote that you can live your life as if everything is magic or nothing is magic, and this certainly felt like a magical experience."