Chances increasing for tropical system to form in Atlantic

The first named storm of the year in the East Pacific will make landfall in southern Mexico early this week, bringing damaging wind gusts and a significant flooding threat.

It’s becoming more likely that a tropical system will form in the Atlantic soon after the 2022 hurricane season officially begins on June 1, AccuWeather forecasters say. The system is expected to develop in the warm waters surrounding southeastern Mexico and western Cuba, and meteorologists say there is already some risk that the tropical feature could approach Florida and the Bahamas next week.

A broad area of weak low pressure and clusters of thunderstorms around Central America, known as the Central American Gyre, has already given birth to Hurricane Agatha on the Pacific side and, with Agatha's help, could generate the Atlantic's first organized tropical system of the 2022 season in a matter of days. AccuWeather meteorologists have been keeping a close eye on this zone near Central America since mid-May.

"While the chance of Agatha maintaining a defined, strong circulation after moving inland over the mountainous terrain in southern Mexico is slim, a more likely solution is for moisture and residual energy from Agatha to give birth to a new storm system on the Atlantic side," AccuWeather Senior Meteorologist Courtney Travis said.

A preseason storm has developed in the Atlantic basin for the past seven seasons, but that streak is poised to come to an end with the first storm not likely to form until the first few days of June. 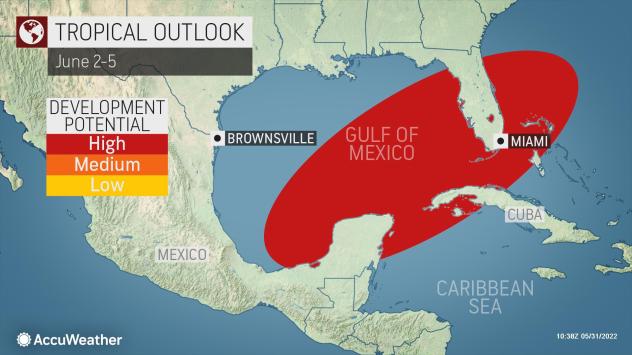 The development of a new tropical low-pressure area or redevelopment of Agatha has been raised to a high chance by AccuWeather meteorologists. The area in question for possible development stretches from the southern Gulf of Mexico and the northwestern Caribbean beginning as early as Thursday to waters surrounding Florida as late as this weekend.

Regardless of whether Agatha's circulation and low-pressure center survive the trek across Mexico, the system would be given a new name. The first name on the list of Atlantic tropical storms for the 2022 season is Alex.

"Steering breezes could guide the system on a path that could take drenching showers and gusty thunderstorms across portions of western Cuba, the Florida Keys, the Florida Peninsula and later the Bahamas," AccuWeather Lead Long-Range Meteorologists Paul Pastelok said. However, the path of such a system is dependent on a number of factors, including the strength of the system itself and non-tropical systems over the U.S. and the western Atlantic, he added.

Ocean waters are sufficiently warm for tropical development, and the temperatures are generally a few degrees above average and in the 80s F. Water temperatures surrounding western Cuba and the Florida Keys are in the mid-80s. If a budding tropical system were to wander into the very warm water, a storm could strengthen rapidly, experts say. 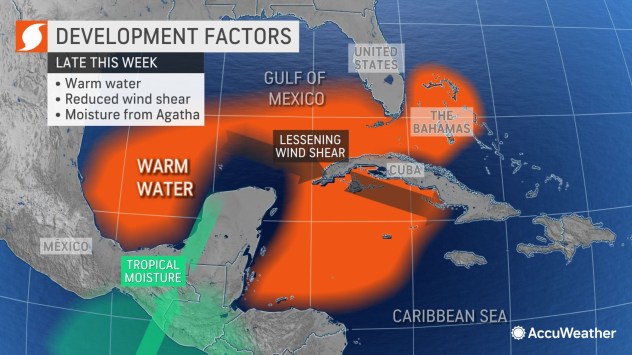 "There is significant wind shear in the region at the start of this week, but it appears that these disruptive winds will drop off as the week progress," Pastelok said. Wind shear, the change in direction and speed of winds throughout the various levels of the atmosphere, is one of the key obstacles to tropical cyclone development around the world.

Not only is the strength of this potential tropical system still in question, but so is its possible track. In one scenario studied closely by forecasters, steering breezes could bring an organized system near the Atlantic coast of the U.S. next week.

"Once the center of the system moves away from the Yucatan Peninsula and perhaps avoids Cuba, it could grow strong even while crossing Florida," AccuWeather Senior Meteorologist Joe Lundberg said. "Impacts from torrential downpours and flooding could then be joined by building seas and dangerous surf as well as the potential for damaging winds."

If tropical development is delayed in the southern Gulf of Mexico or the northwestern Caribbean until next week, then the pathway for a tropical system to head toward the East Coast of the U.S. will close. However, another part of the U.S. could be at risk.

"There is a remote chance that if development holds off until after June 5, an area of high pressure forecast to slide across the southeastern U.S. could direct any tropical system toward Texas later next week," Pastelok said.

Crossover tropical systems, such as the potential with Agatha, are rare. However, there is a fairly recent example of a former tropical system from the eastern Pacific that helped give birth to a new storm on the Atlantic side of Central America.

This satellite loop from June 2020 shows the evolution of the Gulf of Mexico's Tropical Storm Cristobal from the former Tropical Storm Amanda in the East Pacific. (AccuWeather)

During the historic 2020 Atlantic hurricane season, Tropical Storm Amanda moved inland from the eastern Pacific over Mexico and began to unravel. But Amanda's leftover energy, moisture and old circulation helped to give birth to Tropical Storm Cristobal in early June over the Gulf of Mexico, which went on to make landfall along the central Gulf Coast of the U.S.

There is another area of the Atlantic basin where a potential tropical system could take shape.

AccuWeather meteorologists are monitoring a general zone of showers and thunderstorms associated with weak low pressure currently over the Bahamas and South Florida early this week. There is a remote chance this area of disturbed weather could slowly organize as it drifts northeastward during the week. 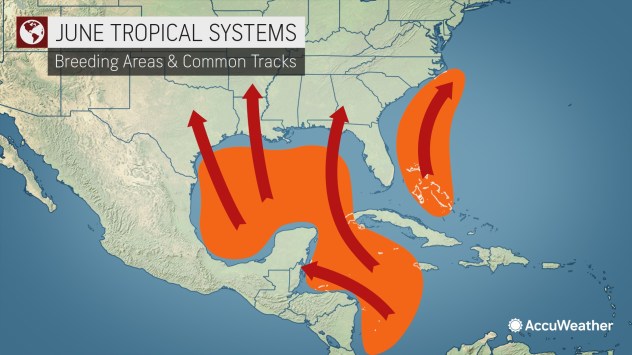 Waters near the Atlantic and Gulf coasts of the United States, as well as the islands of the western Caribbean and Central America, are perennial hot spots for tropical development in June.

Even though tropical development in the Atlantic will not occur prior to the official start of hurricane season this year for the first time since 2014, an above-average number of named systems and hurricanes are forecast by AccuWeather for the 2022 season.