Dreaming of a white Christmas? AccuWeather forecasters weigh in on where it’s most likely

Winter got an early start in some areas this year, but will snow stick around long enough for the holiday? AccuWeather meteorologists provide a sneak peek at which places have higher-than-normal chances for snow this Christmas.

It's beginning to look a lot like Christmas as colorful lights adorn homes, and decorations and seasonal favorites are on display in stores around the country, but many may be wondering whether Mother Nature will also create a wintry scene in time for the holiday. AccuWeather forecasters released their annual white Christmas forecast on Friday, noting that while chances aren't overwhelmingly high for large parts of the nation, a few pockets across the country may luck out just in time for the holiday.

AccuWeather's team of long-range forecasters, led by Senior Meteorologist Paul Pastelok, has been closely examining key weather patterns that could favor snow in time for the holidays across the United States.

One of the most influential weather patterns includes La Niña, which will be in play for the third winter in a row, according to Pastelok. This pattern, which originates with cooler-than-normal waters in the central and eastern Pacific around the equator, often drives an active storm track across the northern tier of the U.S. and leaves southern sections of the country drier than normal.

Despite it being the third year in a row with La Niña, Pastelok says that his holiday season will not shape up exactly like the past two years. 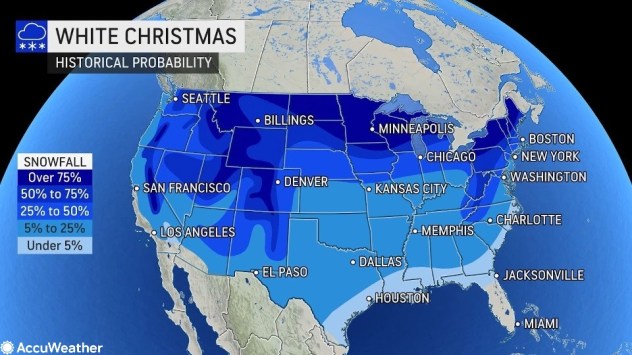 The pattern could hinder chances for a "white Christmas," which is defined by having at least an inch of snow on the ground on Dec. 25.

Read on to find out what you may wake up to see this year!

In the Northeast, winter got a head start after a historic lake-effect snow event dumped more than 6 feet of snow across portions of western and northern New York in mid-November.

It will take an extended amount of time for the mountains of snow left behind by that storm to melt. The mild temperatures and weather conditions expected during the second half of December across the Northeast will likely not escalate the process.

Even though favorable conditions will develop to allow snow and intense cold weather to spread across the Northeast during the first half of December, the later part of the month will feature moderating temperatures and lower chances for a snowstorm. According to Pastelok, as the holiday nears, the forecast weather pattern will support more rain and perhaps ice compared to snow. 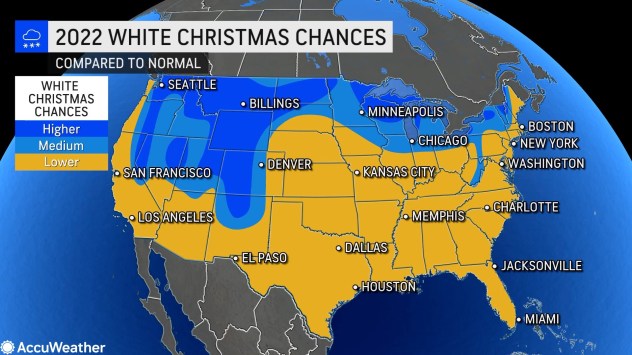 New England, which is forecast to be the only area east of the Rocky Mountains where snowfall could end up being above average for the winter, will get off to a slow start. The chances for a white Christmas will remain lower than normal for most of New England. Once the calendar flips to 2023, snowfall totals will likely be boosted by a few nor'easters, according to AccuWeather's winter forecast.

Although the chances remain relatively lower than average from coastal Maine to Virginia, snow lovers in the Northeast can find joy in that it won't be a total bust in terms of snow chances across the region this year. Near-normal chances are still expected across far northern New England and upstate, central and western New York. Cities such as Burlington, Vermont, Albany and Syracuse, New York, and Cleveland, could be in luck this holiday season.

While the spine of the Appalachian Mountains looks to have an above-normal chance of having snow on the ground in time for Christmas, Pastelok warns that some brief periods of warmer weather before the holiday could reduce the amount of snow across the central Appalachians. 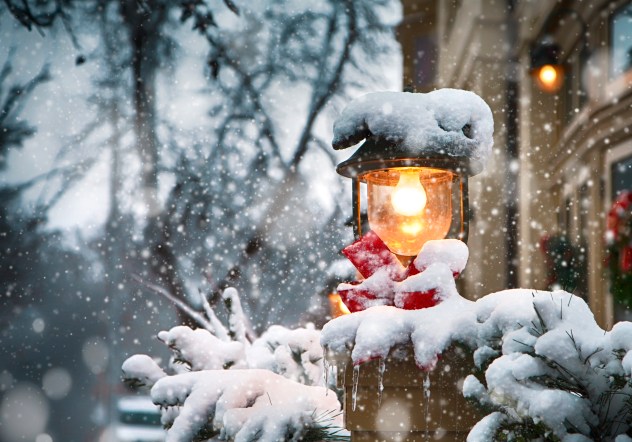 Northern Plains and Upper Midwest a ‘big area to watch’

Across the central Plains and Tennessee Valley, chances for a white Christmas are typically less than 25%, based on historical data from the National Oceanic and Atmospheric Administration (NOAA). These areas might see snow leading up to this holiday season, but Patselok says the million-dollar question is 'how long will it stick around?'

"The cold will [stick around] until about the 15th, 20th of the month," Patselok said. "So there is an opportunity that parts of the Tennessee Valley could have a higher chance of seeing a white Christmas [compared to normal]."

Chicago, a city known for its extreme cold and winter weather, has a near-normal chance this year. The Windy City measured its first snow on Oct. 17, which is nearly a month earlier than average and more than two months earlier compared to last year. On average, Chicago records its first snowfall around Nov. 18, but last year, the first snowfall didn't occur until Dec. 28, which is the city's latest first snowfall ever. 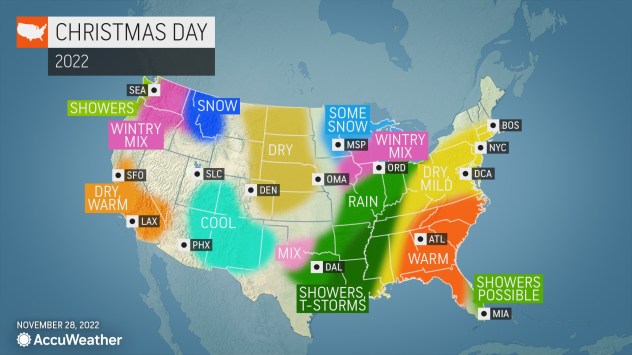 The Upper Peninsula of Michigan, northern Wisconsin and northeastern Minnesota typically have more than a 75% chance of a white Christmas, according to historical data compiled by the National Weather Service (NWS). And, according to Pastelok, snow chances on Christmas will likely be higher than normal.

Nebraska, which typically doesn't measure a lot of snow around Christmastime, is another state across the Plains that Patselok is keeping an eye on this year.

"That area does have a chance this year with a late-month storm system coming in," Pastelok said.

Any snow that falls during December across the northern Plains will likely stick for the holidays as cold weather is expected. For instance, Billings, Montana, is expected to have a higher-than-average chance of a white Christmas this year.

Across Iowa and southern Nebraska, the cold weather and precipitation likely won't link up at the same time, according to Pastelok. This means residents will have to keep wishing for a white Christmas as both locations are expected to have a lower-than-normal chance this year. 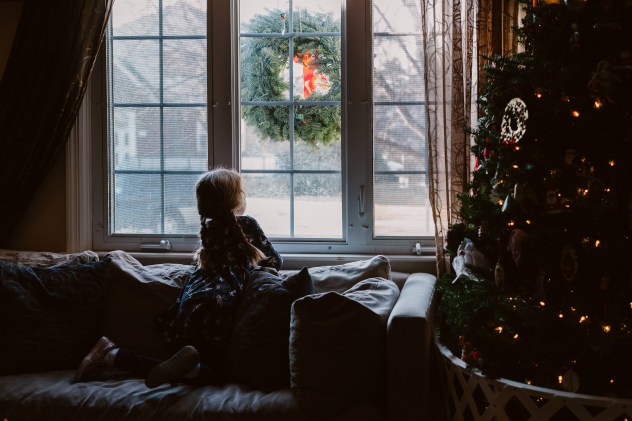 Across the Northwest and Rockies, a replenishing period of snow is expected during the middle of the month. Snow will stick around the typical spots in the higher elevations, with over a 90% chance of a white Christmas expected. But, in cities such as Salt Lake City and Denver, the chances are near to slightly above normal.

A cold weather pattern is expected in December and January across western Canada and the Northwest, which will send temperatures plummetting, especially across lower-elevation areas. This will allow a little more snow to fall in major Northwest cities, such as Seattle and Portland, Oregon. If the cold lingers, there is a chance this year that some snow may still be on the ground close to Christmas in the lower elevations as well.

Seattle measured its first snow more than a month early when snow 0.9 of an inch fell on Nov. 29. Typically the city doesn't measure its first snow until Dec. 31. The rounds of cold weather could potentially paint the Emerald City white just in time for the holiday.

The Seattle area is one part of the country that forecasters are monitoring for a higher percentage of this year, Pastelok said.

While Seattle and Portland will have a near-normal to higher-than-normal chance for a white Christmas, the ocean water will produce milder conditions that will support rain instead of snow along the immediate West Coast. 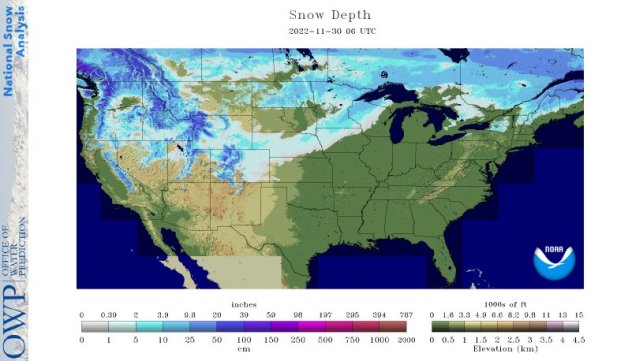 Most of the snowfall was located in the Rockies and the interior Northwest, but the snow also stretched out to the Upper Midwest and even some isolated parts of the Northeast, reflective of what the states might have come Christmas.

The 'mere accident of history' that popularized a white Christmas