AccuWeather forecasters discuss the biggest highlights of cold and snowy weather expected -- plus some of the factors like triple-dip La Niña and the polar vortex that they will be keeping an eye on.

Meteorological winter has arrived in the Northern Hemisphere, a three-month season that starts on Dec. 1 and runs through the end of February. Many people across the United States have already seen flashes of winter ranging from rain and mountain snow across the West Coast, sub-freezing temperatures in the Plains and mountains of lake-effect snow that piled up near the Great Lakes.

Here are the top five things to know about the weather this winter:

Snow will be less frequent, but still prominent along East Coast

Snow shovels may be needed sooner rather than later in the eastern U.S. with the chance for plowable snow around the middle of December, the first of several stormy periods across the region this winter. AccuWeather Lead Long-Range Forecaster Paul Pastelok said that there could be chances for more significant snowfall during the second half of January and then again around the end of the winter, including nor'easters.

Snowfall this winter is expected to be below normal overall across the mid-Atlantic, Ohio Valley and Tennessee Valley this winter despite these periods of stormy weather. Areas with the highest chance for above-normal snowfall are New England and the Upper Midwest. 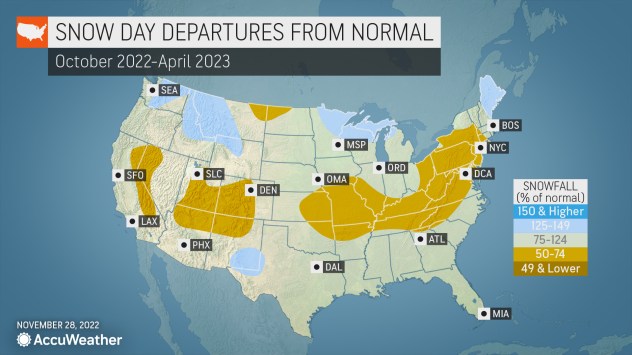 AccuWeather is predicting 18 to 23 inches of snow in New York City, below the average of 29.8 inches but above the 17.9 inches that accumulated last winter. Boston could be the snowiest city in the Northeast this winter with 40 to 50 inches forecast to pile up, right around the average of 49.2 inches and just shy of the 54 inches that fell last winter.

December chill to be a preview for what's to come

A blast of bitterly cold air will accompany the chance of snow in mid-December, and it will be a glimpse of what's down the road with even colder Arctic intrusions expected later in the season.

The polar vortex may dip southward over the contiguous U.S. in February, unleashing the coldest air of the year. If the ground across the nation's heartland is covered in snow when the polar vortex arrives, it will allow the frigid air to reach all the way down to the Gulf Coast.

A stormy winter is in the offing for the nation's midsection with precipitation helping the Mississippi River return to normal after water levels bottomed out at historic lows in October.

The stormy pattern will bring not only much-needed rain to the region but also some snow. AccuWeather experts believe the highest chances for major snowstorms and blizzards will occur during the second half of the season. 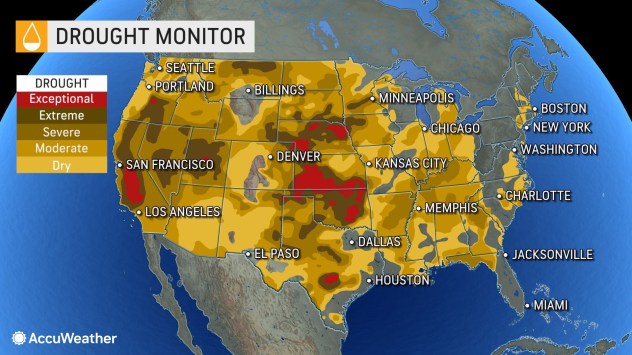 As of Dec. 1, most of the areas between the Appalachian Mountains and the Rocky Mountains were experiencing moderate to severe drought with pockets of extreme drought in the central Plains. Wintertime precipitation will help alleviate the drought before farmers plant their crops for the upcoming growing season.

The same pattern that will spread rain and snow across the central U.S. this winter could also spell trouble across the Southeast.

The Gulf Coast states are often the focal point of severe weather during the winter months, and this season will be no different. February could turn out to be the busiest month for severe weather across the southeastern U.S., although residents should not let their guard down in December or January.

Early-season storms have delivered rain and mountain snow to much of the West Coast in the weeks leading up to the start of meteorological winter, but AccuWeather long-range forecasters warn that this will not be the trend for the entire winter season. 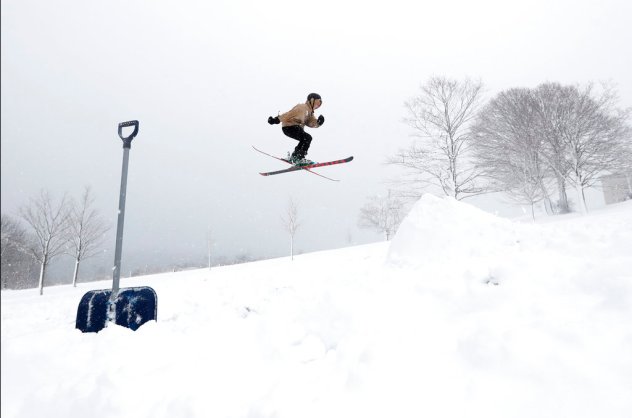 Wesley Miller performs a 360 during a nor'easter, Thursday, March 8, 2018, in Portland, Maine. Miller and some friends built the jump while enjoying a snow day from school due to the storm. (AP Photo/Robert F. Bukaty)

The primary storm track is forecast to focus on British Columbia, but systems will occasionally dip farther south, spreading rain and snow across much of the region, including California.

Drought conditions across the region could improve by the spring, but it is unlikely that this winter alone will bring an end to the widespread, long-term drought plaguing most of the western U.S.

Extra! Extra! A few more bonus points for this winter

•A triple-dip La Niña will help to dictate the weather pattern in the U.S. this winter. This will be the third winter in a row that La Niña is present, but other meteorological factors will be at play, meaning that this winter will not be an exact copy of the past two winters.

•A good ski season is forecast for most of the U.S., especially in the Pacific Northwest, Rocky Mountains, Midwest and New England.

•Dreaming of a white Christmas? There is a higher-than-normal chance of there being at least 1 inch of snow on the ground on Christmas Day across the northern tier of the U.S., AccuWeather forecasters say. 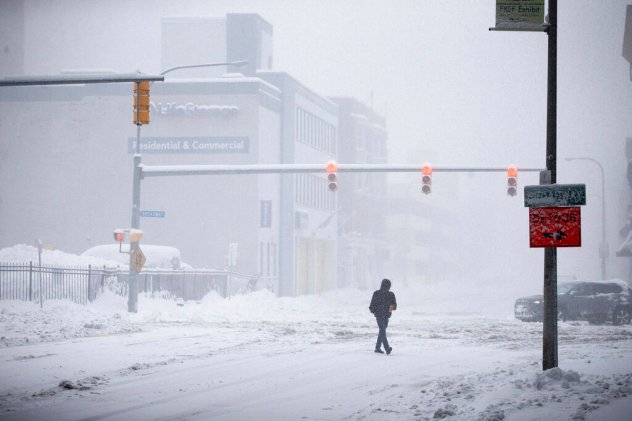 A person crosses Ellicott Street as snow falls Friday, Nov. 18, 2022, in Buffalo, N.Y. A dangerous lake-effect snowstorm paralyzed parts of western and northern New York, with nearly 2 feet of snow already on the ground in some places and possibly much more on the way. (AP Photo/Joshua Bessex)

People are turning off their heat as prices surge