'It's like living in an igloo.' People are turning off their heat as prices surge 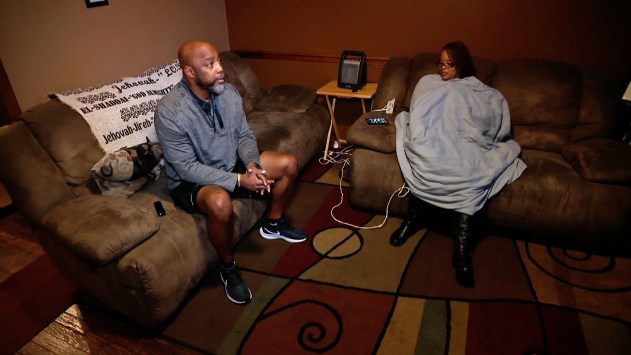 As the first frigid weather of autumn chills the Northeast, many people are faced with a tough decision: deal with the surging costs of heating their homes or live without it. (CNN)

(CNN) -- As the first frigid weather of autumn chills the Northeast, many people are faced with a tough decision: deal with the surging costs of heating their homes or live without it.

Home heating prices are skyrocketing yet again this winter, up 18% nationwide on top of last year's 17% spike, according to the National Energy Assistance Directors Association (NEADA).

Charmaine Johnson works in the call center at Philadelphia's Heater Hotline, part of a non-profit that assists low-income families with their heating systems and bills. Johnson, 63, can relate to the concerns she's hearing all day. She, too, is struggling to afford her heating bills.

With help from her son, Johnson just paid more than $1,000 to fill part of her oil tank, which she hopes will last her most of the winter.

Johnson says she doesn't qualify for government assistance with her heating bills. As inflation also pushes up her food budget and other expenses, she is bundling up and keeping the heat turned down, hoping to stretch that oil for as long as possible.

Several factors are driving hikes in home heating prices, including the war in Ukraine, OPEC+ cuts, a surge in energy exports, lower energy inventories, and a high demand for natural gas in the US electric power sector, according to the Energy Information Administration (EIA).

EIA projects heating a home with natural gas will cost an extra 25% this winter, and heating with electric will run 11% higher. The steepest hike will be on heating oil, which is expected to be 45% more expensive than last winter, squeezing roughly 5 million households, mostly in the Northeast.

Tim Wiseley is keeping the heat off at his home outside Philadelphia, even as temperatures dip toward freezing. He wants his heating oil to last as long as possible and filling his tank costs roughly $1,500.

"It's 50 or 55 degrees in here. To me that's not unbearable yet," Wiseley said, adding that he'll turn the heat on when his "teeth chatter."

The 67-year-old is retired, living month-to-month on Social Security benefits. He lost his wife last year, and his medical bills are adding to the long list of expenses.

"You can't go food shopping and get oil. It's one or the other," he said.

Wiseley believes he'll run out of heating oil at some point this winter. He's not sure what he'll do when that happens.

"It's a horrible feeling," he said. "It's a feeling I wouldn't wish on anyone."

This winter, the Biden administration is distributing $4.5 billion in federal assistance to help families pay their heating bills.

The funds for the Low Income Home Energy Assistance Program, known as LIHEAP, stem from regular appropriations by Congress, additional emergency funding lawmakers included in September's continuing resolution and $100 million from the bipartisan infrastructure law that passed last year, according to the Department of Health and Human Services.

Annette Thomas, 53, and her husband received $500 from that program to help them heat their home near Philadelphia, she said. But it was only enough to fill roughly one third of their oil tank, which Thomas thinks will last just two to three weeks.

"That's why we're holding off," she said. "We haven't turned our heat on yet. And it's chilly now."

They're trying to pay off their electric bill in the coming days to avoid a shutoff. Plus, their other bills and expenses are way up. So they're using space heaters and electric blankets to stay warm, hoping to save their heating oil for when their kids come home for Thanksgiving.

"These aren't luxuries, they're necessities, and it is a struggle," Thomas said. "So yes, it's upsetting. It is."