Supply chain concerns are once again on the rise across the United States, but the cause and solution to the issue are one and the same: the weather.

The supply chain across the nation's heartland is facing significant constraints that could have far-reaching consequences into the winter, starting with farmers in the Plains and expanding all the way to the overall economy of the United States.

Exacerbating the problem are the low water levels of the Mississippi River, a crucial waterway for commerce that has seen a steady decline in its flow in recent months due to a lack of rain. A river gauge at Osceola, Arkansas, 35 miles north of Memphis, Tennessee, reported a water level of 8.8 feet below what is considered ‘low stage’ on Wednesday, Oct. 12, the fourth-lowest water level at the location since record-keeping began in 1927.

At least eight barges ran aground earlier in the month due to the low water levels, according to The Associated Press. The risk of barges getting stuck continues to rise with each passing day as the water level continues to fall, putting additional stress on the shipping and barge traffic that rely on the largest U.S. river for transportation.

"It's a really integral part of our overall economy, and it's particularly so for agriculture," Michael Steenhoek, executive director of the Soy Transportation Coalition, told AccuWeather in an interview.

The commerce on the Mississippi River accounts for 92% of the country's agricultural exports, 60% of all grain exports and 78% of feed grains, soybeans and livestock exports.

The timing of the drought and falling water levels could not have come at a worse time for farmers.

"We are in the middle of the harvest season and this is the most active time," AccuWeather Senior Meteorologist Paul Pastelok said. "Barge trafficking is the heaviest means to transport agricultural products."

"If this cannot be controlled, grains cannot get to the ports to transport to other countries," Pastelok said, adding that it could hurt farmers and the overall U.S. economy.

Between Sept. 12 and Oct. 12, the Mississippi River watershed received just a fraction of the average rainfall. 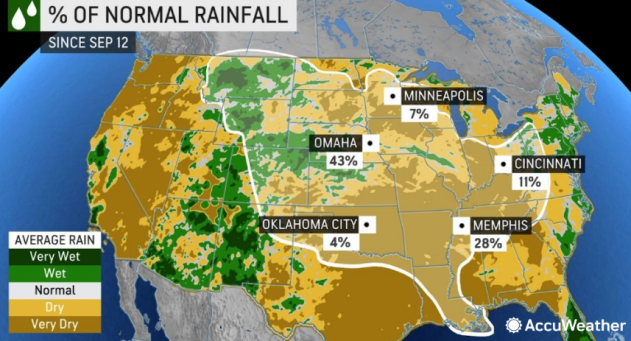 Steenhoek told AccuWeather that concerns over the current situation started to arise nearly a year ago during the winter of 2021-2022 when there was a scarcity of snowfall across the Mississippi River basin.

"A lot of the water that you see on the lower Mississippi River, it originally starts as a snowflake in Montana," he said. "It just continued to compound and of course summer we didn't get much rainfall, so now we're in the situation we're in today."

Steenhoek explained that the demand for crops, such as soybean and corn, is well exceeding the supply due to the reduced shipping on the Mississippi River.

Barges can still navigate down the river, but they may be loaded with fewer goods in order to keep afloat in shallow water. However, this means that the shipping method is less efficient, ultimately leading to higher costs.

"We're seeing well in excess of over 100% increase in the cost of barge freight now versus the same period last year," he explained. "What often happens within the agricultural industry and what's certainly happening right now is those costs are being largely passed on to the farmer. How is that passed on to the farmer? Well, in the form of a lower price that those farmers are offered at that point of sale."

Shipping has not ground to a halt, but it has been significantly reduced.

The U.S. Army Corps of Engineers normally moves between 30 and 40 barges at a time, but that number has been cut to 25 barges due to the extremely low water level, the AP reported. Barge traffic has been reduced by 39% compared to the previous five years.

“Plain and simple, the solution for this is rain, we gotta have rain and we’re gonna need and you’re gonna need a lot of it,” Tyler Oxner, with the Arkansas Farm Bureau, told KATV, a news station based out of Little Rock, Arkansas. 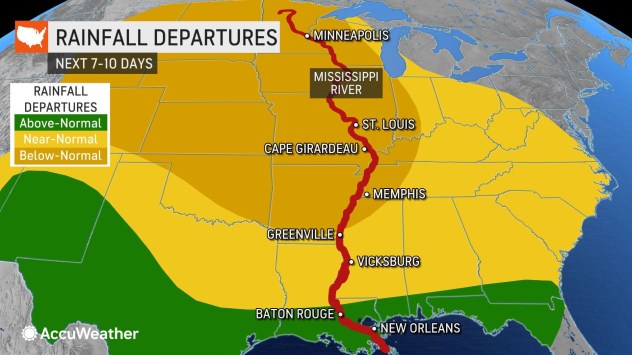 The fallout from the reduced flow of the Mississippi is also impacting the travel industry.

A Viking cruise ship on the Mississippi River recently set sail on its maiden voyage, starting in Louisiana with the goal of taking passengers up the river to St. Paul, Minnesota, but as passenger R. Thomas Berner told AccuWeather, the cruise fell well short of its destination.

Berner said that after departing from Baton Rouge, Louisiana, it was evident that the low water level was going to derail the voyage.

"We were stopping frequently, and at some point we had to pull over to the shore and anchor along with many barges because the Coast Guard had said that a couple of barges had run into shallow water," Berner told AccuWeather.

"At one point, there were 50 vessels backed up coming downriver and another 50 going upriver," he added.

The cruise ship did not even make it to Memphis, Tennessee, before the entire trip was canceled due to the low water level.

"It was boring," Berner said. "I got tired of taking photographs of the shoreline that showed how low the river was." However, he added that he was refunded for the trip and he and his wife plan on going on more Viking cruises. 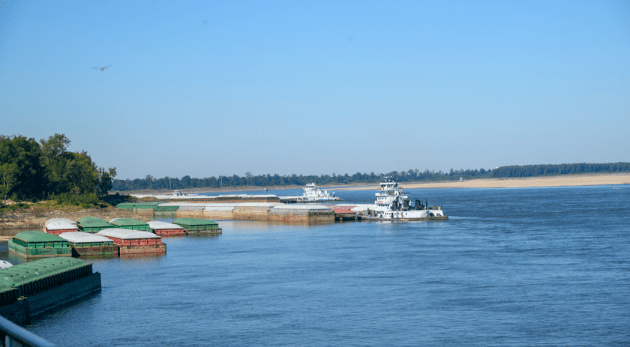 Barges lined up along the banks of the Mississippi River waiting clearance to continue sailing up the river. (R. Thomas Berner)

Conditions on the Mississippi River could get worse before they improve with Pastelok saying that the long-range forecast does not look very wet for the region.

"This could go on through the winter and into the start of spring," Pastelok explained. "The only hope is some relief from the Ohio and Tennessee tributaries which drain into the Mississippi River. There is a chance by mid to late winter, east of the Mississippi River can be wetter as a winter storm track evolves. But farther west, the precipitation forecast is drier at this time."

AccuWeather long-range forecasters are predicting a wet weather pattern to eventually set up across most of the Mississippi River Valley this winter with snow across the northern Plains. These factors should help ease drought concerns and raise the water level on the Mississippi River, but it will take time for this forecast to come to fruition.