Ski season is underway: See what areas will have the best snow conditions

AccuWeather meteorologists issued their annual ski season forecast, highlighting that this winter could be “very interesting” for skiers in one of the most populated regions of the country.

The wait is finally over for skiers and snowboarders across the United States as snow has returned and a new ski season is underway, although AccuWeather forecasters warn that some popular mountains could be hurting for snow in the coming months.

Ski resorts across the country are starting to open for the season, thanks in part to La Niña. La Niña influences the storm track across the United States, and during the colder months, it can dictate where snow falls and how frequently powder blankets the ski slopes.

"The areas that [have been] getting hit hard over the past couple of weeks have been the Cascades, the Sierra and into the central Rockies," AccuWeather Lead Long-Range Meteorologist Paul Pastelok explained.

After an unusually warm start to November across the Northeast, it has turned dramatically colder in the region since the middle of the month as Arctic air flowed in from Canada. The frigid air allowed some ski resorts to make artificial snow to allow skiers to hit the slopes before Thanksgiving. The recent bouts of lake-effect snow have also laid down a solid base for resorts across New York and Michigan. 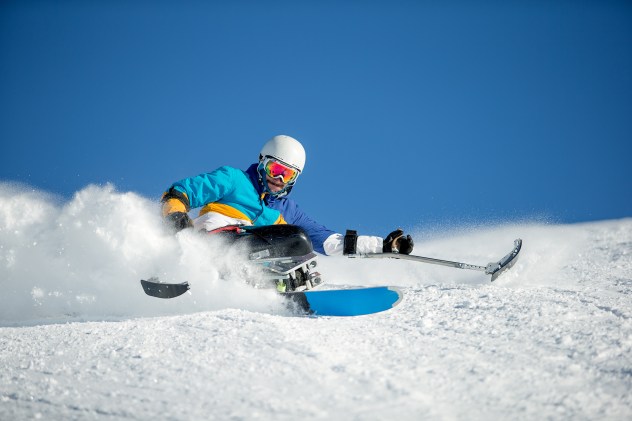 A person skiing down a snowy mountainside. (Getty Images/Daniel Milchev)

Skiers and snowboarders looking to experience the best conditions in the country might want to consider traveling to resorts in Washington or Oregon.

"The best ski conditions this winter [are] probably going to end up being of course across the Northwest," Pastelok explained. Good skiing conditions are also predicted across the Rocky Mountains from Canada down through Colorado.

Forecasters say that it will not be a great winter for skiing across California, Utah and Arizona, but it won't be a bad season either. Storms will occasionally track over this region of the Western U.S., laying down blankets of snow over ski resorts, but spells of dry weather between the snowstorms could impact the slopes.

Pastelok cautioned that periods of warmer weather throughout the season could affect the snow quality at the bases of the ski slopes. 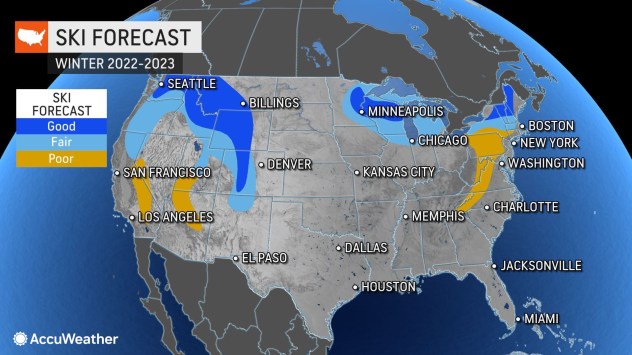 Folks across the eastern United States who do not want to travel across the country to ski will still have plenty of opportunities to hit the slopes this winter, although some patience may be required.

"The back end of the season could be very interesting for the Northeast," Pastelok said, adding that there could be some bigger snowstorms over the region during the second half of the winter.

Resorts from North Carolina through Pennsylvania could have to lean on artificial snow during the first half of the winter until the stormy pattern develops during the latter part of the season.

Farther north in New York and into New England, the season as a whole is forecast to be good, although Pastelok stated that early snowpacks could turn icy by the middle of the winter.

Even better ski conditions are in the forecast across the Midwest, especially in Minnesota, Wisconsin and Michigan.

Pastelok said that these areas could "get hit pretty hard" with snow early in the season, laying down a solid base of snow that will stay intact throughout most or all of the winter.

Skiers and snowboarders may prefer fresh powder over snow produced by people, but Shana Silverman told AccuWeather that the way artificial snow is made gives it a unique property that can benefit resorts during warm spells. Silverman is the senior communication specialist at Keystone Resort in Colorado, a resort that was able to open on Friday, Oct. 28, thanks to assistance from snowmaking machines.

"What we do is propel water in mist form into the air and it freezes on its way down to the ground," Silverman said. She added that human-made snow has less time to freeze before reaching the ground, causing it to have greater density than natural snow. The density of the artificial snow helps it last longer in warm, sunny conditions compared to natural snow.

The snow-making machines can also be helpful for resorts outside of the winter months. In 2021, resorts around Lake Tahoe used their snow-making equipment to stave off a wildfire that was burning nearby. These efforts helped to keep the resorts safe ahead of the ski season.