He had just captured breathtaking video of the serene sapphire-colored glacier lake, but instead of packing up and heading home, he kept the camera rolling -- and what he captured next was "the one."

You'd expect to capture some spectacular images on camera if you're kayaking at a glacier lake in Nepal, but one group of campers saw something they never expected to see: a massive avalanche.

Kiran Shrestha thought he had the most incredible footage he needed to record.

Kayaking in the middle of Kapuche Glacier Lake in the mountainous Annapurna region of central Nepal, Shrestha pulled out his phone and began filming the beautiful sapphire-colored lake and its scenic neighboring ascent.

Similarly, Shrestha's camping companion Shambhu Adhikari had just pulled out his phone to record himself playing some guitar beside the beautiful lake on the cool afternoon of Jan. 9, 2021. 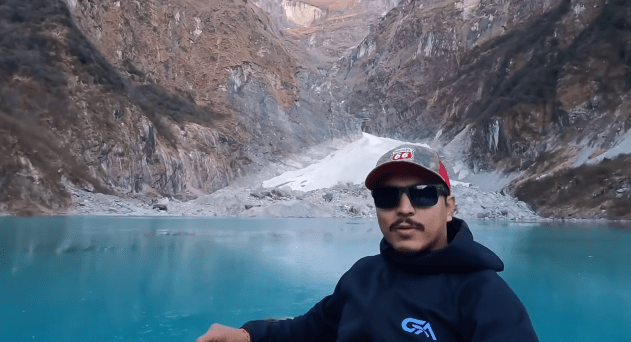 Shrestha initially pulled out his phone to record himself kayaking in the middle of the beautiful Kapuche Glacier Lake. Little did he know what was soon going to happen in the canyon behind him. (YouTube/Kiran Shrestha)

But just moments later, Shrestha, Adhikari and their group of friends were screaming in excitement. They were capturing something far more incredible than the color of the lake or the melody of a guitar.

Far above the lake, a shockingly massive avalanche was roaring down the mountain, which rises up more than 16,400 feet above the glacier lake (or 5,000 meters), barreling down in the midst of a monstrous cloud with incredible winds and force.

“One of my friends was shooting his own video while playing the guitar, and in that moment it came. I saw something coming and then I thought, ‘That is the one.’ That was the avalanche,” Shrestha said with a laugh. “We were hoping that we would get the good shot in.” 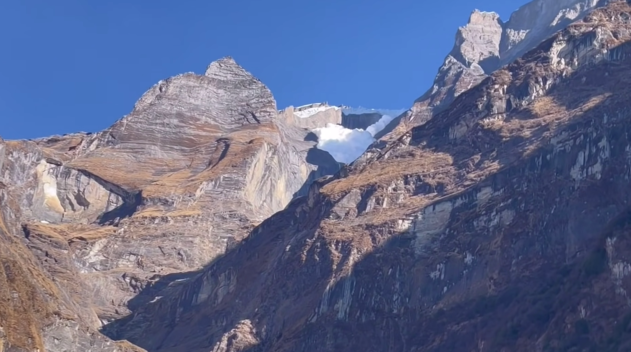 The start of the avalanche footage began with the rushing snow being noticed deep in the canyon. (YouTube/Kiran Shrestha)

And get a good shot in they did. As Shrestha and his camping buddies stood in amazement at the clouded snow mass, the avalanche grew larger and larger, climbing closer inch by inch.

The Kapuche Glacier Lake is in Parche, Nepal, located about 90 miles northwest of Kathmandu, and is a scenic stop amid a remote trekking route that was recently opened to the public in the past three years. It's located more than 8,350 feet (2,546 meters) above sea level, known as the lowest-altitude glacier lake in the world.

But as Shrestha and his friends were finishing their camping trip and readying to go back home, the most incredible part of their trip was just beginning.

Just seconds after first noticing the avalanche in the distance, the pack of snow and the puff of clouds began billowing its way towards the campers. (YouTube/Kiran Shrestha)

“We never expected that to happen,” Shrestha told AccuWeather. “We didn’t expect that at all. I was in the boat rowing to the other side of the lake and then just after 15 minutes… we were tired and looking to go back home, but at that moment when I was taking some video of my friend and then I saw that.”

The men all began screaming with excitement, a mixed noise of bewilderment and horror. Too awestricken to run away, they kept their cameras rolling as the massive plume worked its way closer and closer to their lake. Shrestha said the closer and closer it got, the more and more they wanted to stay to see how big it would truly get.

Carried down the canyon by the rush of snow, heavy gusts of winds raced amid the avalanche and rushed towards the group of men with ferocity. It was once those winds reached Shrestha and his friends that the amazement was coupled with worry.

As the winds and debris from the avalanche reached the men, their amazement quickly turned to worry for their scattered belongings. (YouTube/Kiran Shrestha)

“We didn’t know how to shoot it or how to react; we had never seen one ourselves,” he said. “We didn’t know how it was going to be, and we were experiencing it for the first time. [The wind] was quite horrible, everything that we had inside the tent blew away and our bags that had our electronics and stuff all got inside the lake so we were worried about that.”

Flying debris from the rush of winds generated by the avalanche sent the men scurrying away as their belongings scattered.

But after recovering all of their things, Shrestha said he can't help but look back on the moment with awe and wonder.

Amplifying that awe and wonder, like a perfect bow on top of the gift of nature, was yet another mind-blowing weather phenomenon in the wake of the avalanche cloud. Over the expanse of Kapuche Glacier Lake was a bending rainbow, stretching from one side to the opposite.

Immediately, the men couldn't help but go and leap for joy underneath, a mixed celebration at the wonderment of the avalanche and the thankfulness to be safe.

"We just didn’t expect it. The trip was good and we enjoyed ourselves and we camped over there, but afterward it completely changed every aspect of the trip," he said. "It changed everything! We were overly excited. We didn’t know how to express it. In my lifetime, I’ve never seen something like that. That was the experience, once in a lifetime."