What is La Nina?

From the sun and sand of Southern California to the mountainous, snowy landscapes of New England, the climatological phenomenon known as La Niña can have a major impact on how winter weather unfolds across the United States.

What is La Niña?

From snowstorms and blizzards to drought and warmth, the climatological phenomenon known as La Niña can have a profound impact on what kind of winter you should expect.

The term La Niña may be one that casual weather observers as well as aficionados hear meteorologists using from time to time, especially when breaking down long-term weather trends or providing a sneak peek at conditions expected during an upcoming winter or hurricane season. But, what exactly is La Niña? Let's take an in-depth look.

The key to how winter in the United States may unfold often lies thousands of miles away in the open waters of the equatorial Pacific Ocean. It's there where the roots of a climatological phenomenon known as La Niña originate and eventually help shape weather patterns worldwide.

La Niña, which translates to "little girl" in Spanish, and El Niño, which translates to "little boy" in Spanish, are two phases of a three-pronged natural climate pattern that occurs across a large portion of the tropical Pacific Ocean known as the El Niño-Southern Oscillation (ENSO). ENSO's three phases are broken down into La Niña's cool phase, El Niño's warm phase and a phase that is neither warm nor cool, known as neutral.

Meteorologists often refer to the effects of climate patterns using a concept known as teleconnections. Teleconnections are a series of factors, like sea surface temperatures, that can have implications on weather conditions in areas far from the origin of those factors.

Want to know what the weather will be like in a few days? According to AccuWeather Meteorologist Joe Bauer, people who live in the United States can often just look to the west.

"Most of the weather the U.S. experiences first has to travel across the Pacific Ocean," Bauer explained. 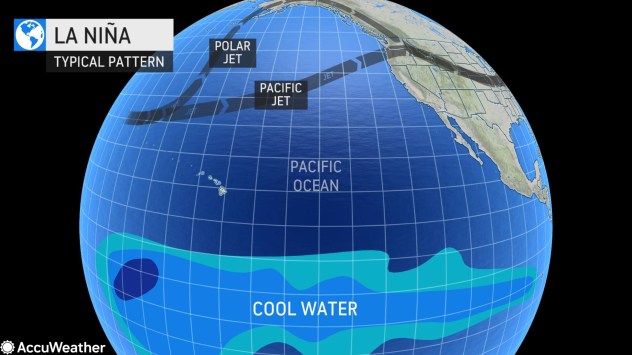 The weather impacts of La Niña in the U.S. are often most apparent during the winter, although the climate pattern typically lasts nine months to a year and can occasionally last for years, according to the National Oceanic and Atmospheric Administration.

So, how can La Niña, a phenomenon that occurs thousands of miles away, influence weather in the U.S.? The cooler water in the equatorial Pacific can help to amplify the northern jet stream, also known as the polar jet stream, which is a major driver in where storms track across the country during winter. A more potent polar jet stream ushers in colder air and more frequent storms across the northern tier of the nation. At the same time, the pattern also weakens the southern jet stream, known as the subtropical jet stream, and often results in drier and milder weather across southern areas of the U.S.

One of the tell-tale signs of a La Niña winter is wetter-than-normal weather across the Pacific Northwest. Typically, western Canada and the northwestern U.S. endure the stormiest conditions during a La Niña winter. However, the storms generally lose intensity as they travel over the northern Rockies. If a storm is potent enough, it can reach farther eastward and deliver snow to portions of the Midwest or the Great Lakes region. However, on average, the storms during a La Niña winter lack enough moisture to produce a major storm for areas farther east of the Great Lakes.

Even though stronger storms may not make it past the Rockies as frequently, a greater number of weak storms may navigate across the Midwest and Great Lakes. This can keep snowfall totals at normal or even above-normal levels with many smaller events occurring, rather than a blockbuster snowstorm or two.

Winter in the Northeast is extremely variable during a La Niña phase, with conditions ranging from colder and drier to mild and stormier. 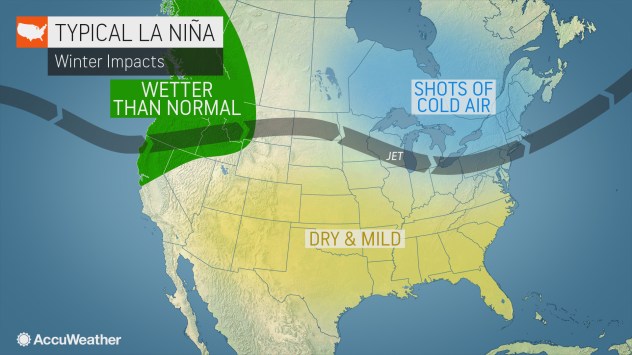 While an El Niño pattern can fuel streams of moisture into California, a typical La Niña winter prevents storms from delivering snow and rain to the region.

Similar concerns exist for much of the Southwest during a La Niña winter.

"As the active storm track remains displaced well to the north, the Southwest typically stays warm and dry," Bauer explained.

With a less potent southern jet stream, mild conditions are able to span from the Four Corners region to the Southeast and even north into parts of the mid-Atlantic during a La Niña winter.

It's not just during winter that La Niña makes its presence felt. La Niña also has a significant influence on tropical development in the Atlantic basin during hurricane season.

When a La Niña phase occurs, less wind shear is found in the regions of the Atlantic basin where tropical weather develops, increasing the potential for a higher-than-normal amount of tropical systems.

La Niña was in place for both the prolific 2005 and 2020 Atlantic hurricane seasons. The 2005 season featured the devastating Hurricane Katrina and was also the first time the predetermined list of designated storm names had been exhausted. Forecasters had to turn to Greek letters to name storms for the first time in history. The second and final time forecasters would tap into the Greek alphabet was the record-breaking 2020 hurricane season. That year featured an unprecedented 11 direct strikes from tropical cyclones on U.S. soil, including the now-infamous Hurricane Laura.

Both La Niña and El Niño tend to reach peak intensity from fall, which is a key time for hurricane season impacts, through winter.

What exactly is a nor'easter?
For first time ever, drone sent into eye of Cat. 4 hurricane
What is freezing fog?