What is El Niño?

El Niño is a part of a routine climate pattern that occurs when sea surface temperatures in the tropical Pacific Ocean rise to above-normal levels for an extended period of time.

The opposite of El Niño, La Niña, is when sea surface temperatures in the central Pacific drop to lower-than-normal levels.

These warm and cool phases are part of a recurring climate pattern that occurs across this section of the Pacific, known as the El Nino-Southern Oscillation (ENSO), according to the National Oceanic and Atmospheric Administration (NOAA). 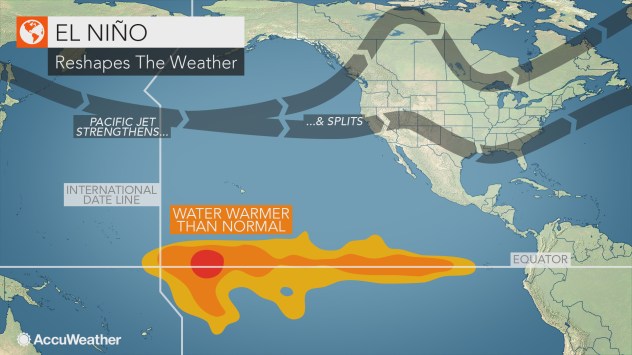 The formation of El Niño can mean significant changes for the weather around the world, particularly in the United States.

When an El Niño is underway, it can have a substantial impact on the amount of tropical systems that develop during the Atlantic hurricane season.

What does El Niño Watch mean for Atlantic hurricane season, US winter?
What are jet streams and how do they influence the weather we experience?
What is La Niña?

Wind shear, or the change of wind speed and direction with altitude, can inhibit tropical development.

When wind shear is not present a tropical cyclone's center will be vertically aligned, which keeps it intact and allows it to strengthen. However, when upper-level winds come over the top of a system, they can tilt the system in one direction and make it harder for the system to intensify further.

This is similar to a spinning top that, when completely upright, can spin continuously without problem. However, when it becomes angled or tilted, it can unravel and come to a halt, Kottlowski explained. 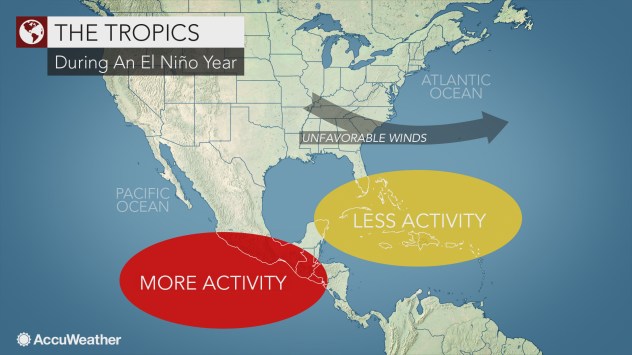 The most notable impacts from El Niño in the United States occur during the winter.

“Typically, El Niño tends to peak during the winter months,” Kottlowski said. “Oftentimes [this occurs] in November and December, but it can peak a little bit later than that.”

During a typical El Niño, the storm track will shift farther south, bringing more opportunities for rain and storms to California and the southwestern U.S.

The southeastern U.S. also tends to be stormier during an El Niño winter because of the split jet stream which brings more tropical moisture across the southern U.S., according to AccuWeather Senior Meteorologist Brett Anderson. An El Niño winter in the Northeast is often warmer, but the region can still be stormy with frequent snowstorms.

The intensity of El Niño can also vary in scale as some could be stronger or weaker than others. One of the biggest factors in how strong an El Niño can become is the strength of the lower-level winds in the central Pacific, according to Anderson.

"Not all El Niños are the same, and other natural climate phenomena can also interact with El Niño, resulting in a wide variety of seasonal impacts across the globe," Anderson said. 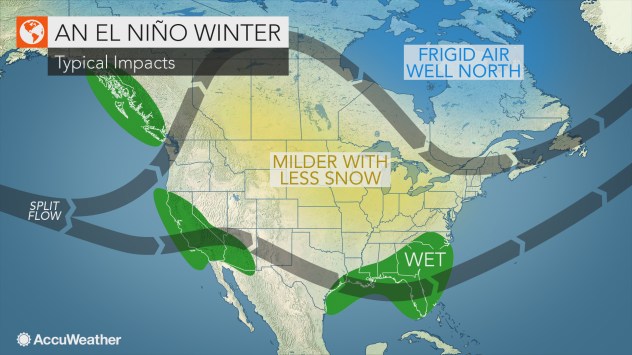 An El Niño pattern can generally last anywhere from a few months up to a year and a half, according to Kottlowski. However, there are occasions when El Niño weakens during the spring but restrengthens during the summer.

It's conceivable that El Niño lasts for more than a year, but typically they last between six to eight months, he said.

When neither an El Niño or La Niña is underway that means the climate pattern is ENSO-neutral. During a neutral stage, that means conditions such as temperatures, surface winds and rainfall in the tropical Pacific are close to their long-term average, according to NOAA.