Another Snowvember: 5 wild stats from the blockbuster lake-effect snowstorm in New York

An extreme lake-effect event that lasted from Wednesday into Sunday left snowfall totals of nearly 7 feet in some spots — taller than the Buffalo Bills’ quarterback — and generated several other fascinating stats that will go down in the weather history books.

A lake-effect snowstorm of epic proportions dumped nearly 7 feet of snow across parts of New York late last week into this past weekend. As many residents continue to shovel their way out, this storm will likely go down in history as one of the most significant lake-effect events in recent history.

AccuWeather's winter weather experts began warning about a significant and possibly record-breaking lake-effect snowstorm as early as Nov. 14. Forecasters noted mild lake water, bitterly cold air aloft and generally uniform wind direction through the lower part of the atmosphere were contributing factors to the extraordinary snowfall totals that were predicted and eventually materialized.

Preparations from New York state officials began as early as Wednesday when New York Gov. Kathy Hochul issued a state of emergency that went into effect on Thursday morning. State departments and agencies worked together to prepare for the dayslong historic snowstorm.

Here are five remarkable stats from the epic, long-duration snowstorm that slammed Buffalo and the surrounding region:

Orchard Park unofficially received 66 inches of accumulation over a 24-hour span. If confirmed by the New York state climatology office, this would set a new state record for the most snowfall in a 24-hour period. The current record stands at 50 inches and was measured in Camden, New York, in 1966.

'Pretty major' temperature difference between Lake Erie and the air

For lake-effect snow to occur, a 23-degree Fahrenheit difference is needed between the lake water and air temperature at about 5,000 feet above the ground. However, the temperature difference between Lake Erie and the air exceeded that requirement.

Taylor also noted the direction of the wind is nearly as important as the temperature difference between the lake and the air.

"When the wind is blowing from the west or even the southwest, it's blowing over a larger portion of lakes Erie and Ontario, and more moisture is able to get into the atmosphere," Taylor said. "So the combination of the really high lake-air temperature differences and the wind direction [created a] situation [that] was really conducive for heavy snowfall rates."

Daily snowfall record broken, not once, but twice at Buffalo Niagara International Airport 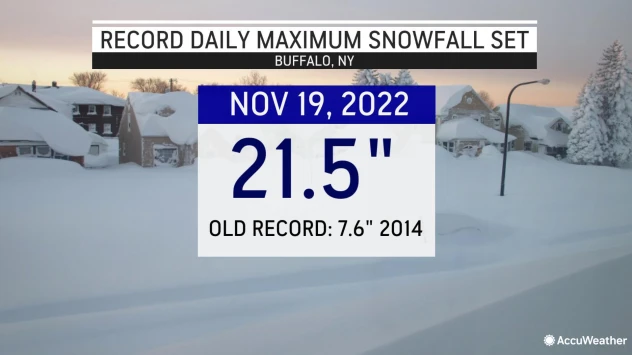 After setting a new daily snowfall record for Friday, Nov. 18, with 16.1 inches of accumulation, the weather station at Buffalo Niagara International Airport topped that mark again on Saturday.

With an impressive 21.5 inches of snow, a new daily record for maximum snowfall was set on Nov. 19, according to the National Weather Service (NWS). The old record for the date was 7.6 inches that fell on Buffalo in 2014 during the heart of the long-duration snowfall event, commonly known as "Snowvember."

Eight years ago, back-to-back storms developed between Nov. 17 and Nov. 21, 2014. The deadly storm pairing dropped nearly 7 feet of snow across parts of western New York. In Cowlesville, about 20 miles east of Buffalo, 88 inches of snow was measured, the highest snowfall amount produced by the storm.

Over a dozen people were killed, and thousands of motorists were trapped in vehicles during the infamous weather event. Due to the tremendous weight of the snow, numerous trees toppled over and triggered power outages, and hundreds of roofs and structures collapsed, according to the NWS office in Buffalo.

One official in western New York even noted that this most recent storm surpassed the 2014 blockbuster in some ways.

"This was a record-breaking storm that, in some ways, it was more intense than the storm that we had, Snowvember, back in 2014," Karen Hoak, deputy commissioner of public works for the county highway division, told the Buffalo News. "We saw at some times that there were six inches per hour of accumulation, so the recovery is still continuing." 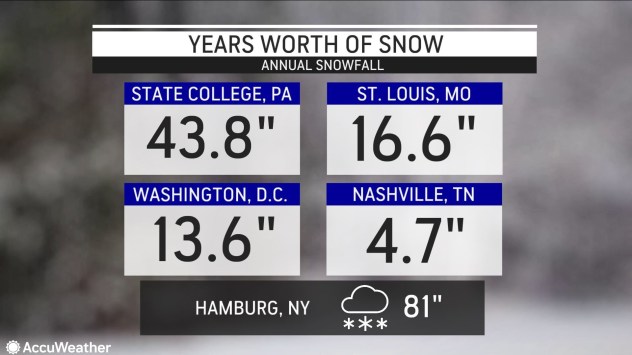 Hamburg, New York, received more than 80 inches of snow in a five-day stretch.

As bands of lake-effect snow, some with snowfall rates of 6 inches per hour, remained nearly stationary over western New York, snowfall totals in some towns rapidly piled up.

Near Hamburg, which is located 12 miles south of Buffalo, the storm's total surpassed 6 feet, with a total of 81 inches of snow overall reported. Around 21.5 inches of that total was recorded between 2 a.m. and 8 a.m. EST Friday.

This six-hour snowfall accumulation is more than the 17.1 inches that fell in Charlotte, North Carolina, over the past six years, according to AccuWeather data. It is also more than three times the amount of snow that has accumulated in Dallas since the start of 2016, with the city's six-year snowfall total coming in at 7 inches.

The 81 inches is also much higher than what some cities can receive in a single year. Cities such as Washington, D.C., and St. Louis average less than 20 inches per year, while other locations such as Nashville average less than 10. 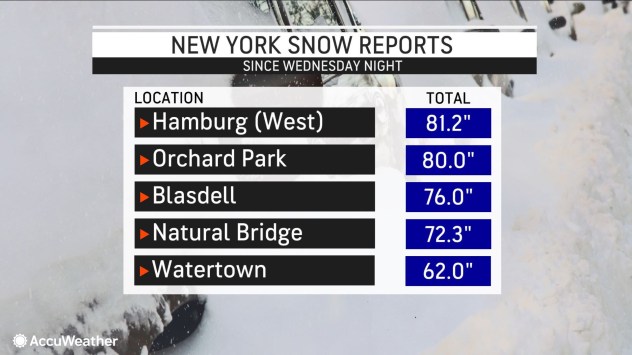 A look at the top snowfall reports from the lake-effect snowstorm as of Monday, Nov. 21.

Storm totals surpassed 6 feet of snow in more than one location, but some of the most impressive amounts came from Orchard Park, New York, located 11 miles southeast of downtown Buffalo and home to the Buffalo Bills. An eye-popping 80 inches of snow was measured on Sunday, making it one of the highest snowfall reports of the entire storm. For comparison, the snowfall piled up in Orchard Park was 2 inches taller than 6-foot-5 Bills quarterback Josh Allen.

Another location south of Buffalo, west of Hamburg, tallied an even higher amount of 81.2 inches of snow.

But, believe it or not, the 80-plus inch amounts do not eclipse the top lake-effect snow total in the recorded history of New York state snowstorms, which stands as high as 141 inches.