Meteorological winter starts on Thursday, but prolonged waves of Arctic air and the chance for nor’easters may not arrive until after the start of the new year.

This winter is shaping up to be a roller coaster ride in New York City, according to the latest long-range prognostications from AccuWeather meteorologists. The meteorological winter season will start Thursday, Dec. 1, while astronomical winter will begin on the winter solstice at 4:48 p.m. EST on Dec. 21. No matter which calendar date you choose to follow, winter is closing in. Here's what residents of the Big Apple and surrounding areas can expect this year.

The worst of winter weather will wait until 2023

•Cold and snowy weather will make appearances in the New York City area during the first half of the winter but will be broken up by spells of milder, snowless conditions.

•The second half of the winter will play out much differently with more chances for Arctic outbreaks and snow, including the chance for nor'easters.

How much snow will fall in the Big Apple? 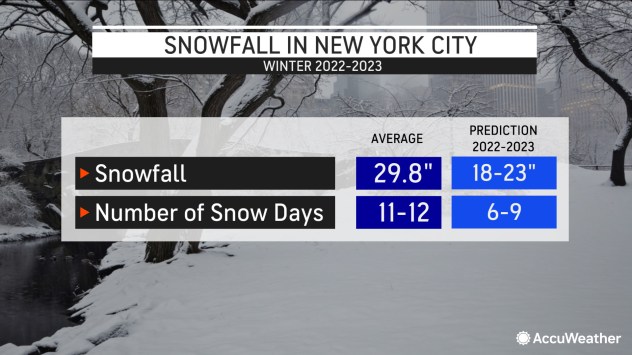 •AccuWeather is predicting 18 to 23 inches of snow will fall in New York City this season, below the normal of 29.8 inches. As of Tuesday, Nov. 29, no snow has been measured in Central Park, which is the official observation site for Manhattan.

•The frequency of snow is also forecast to be lower than normal. Typically, there are 11 or 12 days throughout the winter when snowfall accumulations of at least 0.1 of an inch are measured in the city, but this winter, AccuWeather long-range forecasters say that there will only be six to nine days with measurable snow.

❄️ No more snow days? New York City School Chancellor David C. Banks announced there will be no snow days this academic year due to the ability for students to attend classes virtually, NBC News reported.

How will this year compare to recent winters?

•It may be warmer than last winter, but it also may be snowier. Last season brought 17.9 inches of snow, 85% of which fell in January.

❄️ Blizzard of 2016: Seven years ago, New York City was buried under 27.5 inches of snow during the fourth-worst winter storm to impact the Northeast in the past century.

Snowy scenes from New York City through the years

Snowy scenes from New York City through the years

More on this winter:

•What’s a triple dip La Niña and how could it play a role this winter?  In short, this will be the third winter in a row that La Niña will shape the weather patterns across the U.S. The climate phenomenon occurs when the water near the equator in the eastern Pacific Ocean is cooler than average, which in turn influences the jet stream and the overall weather patterns in North America.

•AccuWeather’s long-range team of meteorologists says that a stormy period with chances of snow may occur around the second week of December, followed by an intense but brief burst of cold. Otherwise, the weather pattern may generally be quiet leading up to the holidays.

❄️ The odds of a white Christmas, defined by an inch of snow on the ground on Dec. 25, are looking lower than normal this year, according to Pastelok. NOAA says there is less than a 25% chance of seeing a white Christmas in the Big Apple in any given year based on data from 1991-2020.