Event organizers were supposed to unveil the crown jewel for a Christmas celebration that helps sustain the small Mississippi town of Columbia. But when storms toppled the attraction, the community stepped in to help.

Over the last few years, a local tourist attraction company has transformed a small Mississippi town into a winter wonderland at the start of December, hoping to bring in visitors to the small community.

The holiday event dubbed the Walt Massey Parade of Lights at Columbia, Mississippi, entertained over 40,000 people in the town of 6,000 last year, and a similar attendance was expected over the weekend, according to Kristan Agoglia, a visual engineer for the tourist attraction company Experience Columbia, which operates the light show.

"A few years ago we started decorating our town, and we add a little bit each year. We have ice skating, trams -- trains -- and a lot of features where people can just be in the presence of animated lights and music," Agoglia said. "It's an exciting place to be."

But this year was supposed to have an added, long-awaited attraction: a 14-story-tall Christmas tree.

Candy cane stripes swirled and Christmas ornaments danced around the tree in a promotion video filmed by Experience Columbia. The attraction had been three years in the making, its assembly starting roughly three months prior to the 2022 celebration.

Excitement bubbled around the new project, especially after the company posted a video on Facebook on Nov. 28, unveiling the tree once they had turned on the lights for the first time.

However, plans on debuting the tree over the weekend fell through when a flurry of severe storms swept through the South over the following days.

Strong winds tore through the area, and a tornado warning was issued for Columbia a few hours after midnight on Wednesday. The National Weather Service Jackson office warned radar had confirmed a tornado near the community of Cheraw, south of Columbia, crossing the Pearl River. Preliminary survey teams confirmed an EF2 tornado had tracked less than 10 miles south of the city near Ten Mile Creek.

Crews found the Christmas tree crumpled on the ground the next day, toppled by the strong winds. Many of the host of angelic light fixtures that encircled the tree had also fallen.

"[To] my immediate team that had spent so many sleepless nights working on it, it was very heartfelt," Agoglia told AccuWeather Prime Host Adam Del Rosso. 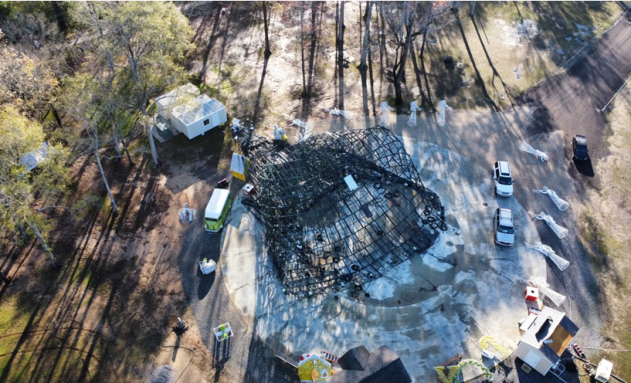 The massive Christmas tree built outside of Columbia, Mississippi, toppled after strong winds struck the area. The area had been under a tornado warning after midnight Wednesday, and radar confirmed a tornado near the community of Cheraw, less than 10 miles south of Columbia. (Experience Columbia MS, Kristian Agoglia)

Among the damage was one of the few canopies that covered the 15,000 square-foot outdoor skating rink, shielding the ice from the Mississippi sun.

A video from after the storms showed the middle canopy had been torn from the supporting rafters, the rink full of water.

But the storms hadn't stolen Christmas yet. People from the community of Columbia reached out, Agoglia said, offering help.

"That outpouring of support locally here in a small town, that helped a lot," he added.

While the tree is unsalvageable, a company in town that builds parachutes volunteered to help fix the fabric that goes over the canopy to save a portion of the Winter Wonderland ahead of the weekend.

At least 21 tornadoes were confirmed from the severe weather outbreak as of Thursday evening, with a few areas yet to be surveyed by NWS teams. This includes the area near Cheraw, where the radar had picked up a tornadic debris signature.

The conversation now with the city, Agoglia said, is what a long-term, weather-withstanding plan would look like to raise another tree.

As for the weekend, the company is hoping to replace the tree with a different sight by Saturday. The Parade of Lights will remain open to those who wish to come and celebrate Christmas with the Columbia community.