At least two fatalities have been reported after dozens of tornadoes touched down Tuesday across Louisiana, Mississippi and Alabama. The tornado outbreak left homes badly damaged and also triggered widespread power outages.

Residents in Louisiana, Mississippi and Alabama took cover as severe weather sparked at least 35 tornado reports across the three states on Tuesday and Tuesday night. The violent weather left at least two people dead, seriously injured many others and destroyed dozens of buildings.

Montgomery County Emergency Management Director Christina Thornton confirmed two fatalities, a 39-year-old woman and an eight-year-old boy, in the Boylston Community of North Montgomery, Alabama, after a tornado touched down in the early morning hours on Wednesday, the Montgomery Advertiser reported. The victims were reportedly a part of the same family.

According to the Advertiser, several buildings and homes in North Montogmery received substantial damage and heavy rescue efforts were ongoing in the area. The damage left behind was determined to be from an EF2 tornado, with peak winds estimated at 115 mph, according to the National Weather Service.

In western Alabama, a suspected tornado tore the roof off an apartment complex in Eutaw, about 79 miles southwest of Birmingham, Tuesday night, according to Storm Prediction Center (SPC). A preliminary storm survey conducted by a team of meteorologists with the NWS's Birmingham office found the damage to be consistent with that of an EF1 tornado, with peak winds estimated at 110 mph.

As the sun rose on Wednesday, the damage at the Sagewood apartment became clear. Not only was the roof ripped off the apartments, but the walls were peeled back, revealing entire rooms on the complex's second floor. Latasha Johnson, the mayor of Eutaw, told AccuWeather in an interview that the extensive damage the complex endured made her grateful that no injuries or fatalities were reported.

According to the few people Johnson had spoken to Wednesday morning, they had found shelter in the walk-in closet, bathroom and kitchen areas of the apartments.

“We are so grateful that no one got killed, that’s the main thing. You know stuff can be replaced, but lives can’t,” Johnson said.

Damage at the Sagewood apartment from a tornado that struck on Tuesday, Nov. 29, 2022. (Storm chaser Brandon Clement)

As of Wednesday morning, at least 16 apartments were deemed unsafe, according to Johnson, but the exact number of people displaced is still uncertain since phone lines are down.

Johnson said that town officials are in the process of cleaning up the streets that are littered with downed trees and working on ways to provide temporary housing to the families who have lost their homes.

“We’re going do all we can to get stuff kind of cleaned up and we’re gonna go forward with our Christmas parade tomorrow with joy,” Johnson said.

The same twister continued its long trek and wreaked havoc in Hale County where dozens of homes were damaged and numerous power lines were downed. Power is expected to be out for several days. As of Wednesday morning, more than 41,000 customers were without power in Alabama, according to PowerOutage.US. In Mississippi, nearly 6,500 customers were without power and just over 5,000 remained without electricity due to the storms in Louisiana.

In the northeastern corner of Alabama, strong winds left a barn in tatters after they tore through the town of Leighton, according to SPC's storm reports. Photos shared by the Brick Hatton Fire Department show significant structural damage on a barn roof. Other images from the fire department showed a mobile home that was severely damaged during the storms.

Severe weather outbreak in the South

Across state lines, in Mississippi, a twister trapped several people in Malone's Grocery Store when it touched down in Lowndes County late Tuesday afternoon. The building sustained damage, but the people made it out safely, WTVA reported.

Lowndes County EMA Director Cindy Lawrence stated that another family nearly a mile away from the grocery store was also trapped inside a home. According to Lawrence, the family eventually made it out safely.

In Pike County, at the opposite end of the state, tornado damage in Magnolia, Mississippi, was determined to be of EF1 intensity, according to a preliminary storm survey.

Additionally, in Lowndes County, a church's steeple had blown over, and a fire station sustained damage from Tuesday's twisters. 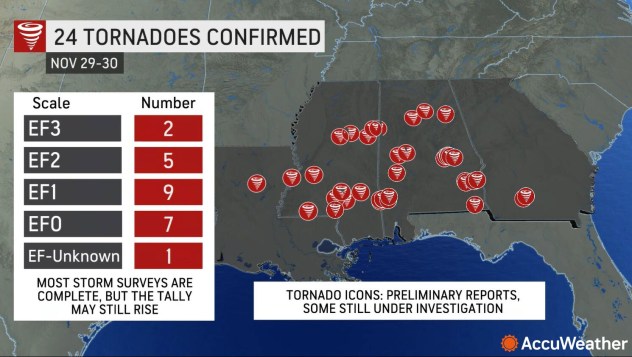 According to the NWS, at least 24 tornadoes have been confirmed as of December 5, including two EF3 tornadoes and five EF2 twisters. One EF3 tornado with maximum winds of 140 mph crossed from Greene County, Mississippi into Washington County, Alabama. In Caldwell Parish, Louisiana, an EF3 tornado of similar strength severely damaged homes and trees.

One suspected twister in Louisiana caused significant damage when it touched down in Caldwell Parish, about 65 miles northeast of Alexandria. The large, destructive tornado left at least two people seriously injured, and significant damage was reported by Caldwell Parish Sheriff Clay Bennett, according to KNOE. Trees were also said to have fallen on homes and debris was reportedly thrown thousands of feet into the air. Based on the damage, meteorologists from the National Weather Service in Shreveport, Louisiana, determined that the Caldwell Parish tornado was an EF3, with peak winds of 140 mph. 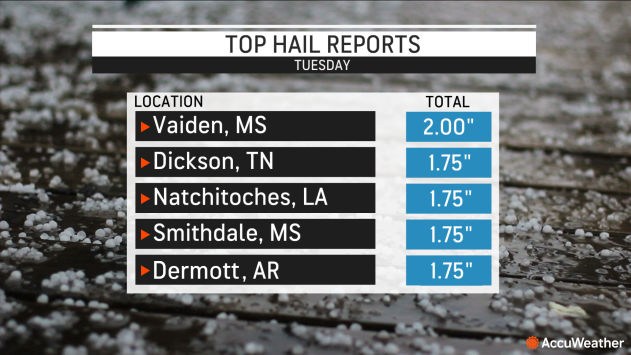 As storms moved across the South Central states on Tuesday, large hail accompanied the severe weather. Hail as large as 2 inches in diameter was reported in Vaiden, Mississippi, which is located in the northwestern part of the state. Hail that large in November in Mississippi is unusual but not unheard of, according to AccuWeather Senior Weather Editor and meteorologist Jesse Ferrell. Large hail was also reported in the state on Nov. 7, 2018, and hail of about 2.75 inches fell on Nov. 29, 2016.

Although tornadoes did not touch down farther north, hail up to the size of golf balls, or 1.75 inches in diameter, fell as far north as Dickson, Tennessee, which is about 34 miles west of Nashville.

Early Tuesday afternoon, the National Weather Service (NWS) issued a tornado watch for parts of Louisiana, southeastern Arkansas and central Mississippi as powerful thunderstorms began to develop. The watch was labeled a "particularly dangerous situation," as numerous, intense and long-lived twisters, were expected to touch down.

There have been only two other PDS watches issued during 2022, according to data from Iowa State University. Both occurred during May, one of which was for a severe thunderstorm watch across parts of the Plains and Midwest. The second was for a tornado watch issued across Minnesota and South Dakota. The PDS tornado watch issued Tuesday at the start of the severe weather outbreak was the first to be issued during the month of November since 2013, according to Ferrell.

AccuWeather meteorologists began warning about the threat of potentially dangerous severe weather as early as Nov. 25. Forecasters noted a storm system would bring severe weather, strong winds and a sharp change to colder weather across the central U.S., affecting tens of millions of people.

Correction: This story previously misstated the age of one of the storm victims. The boy who died as a result of the tornado was 8 years old, not 2 years old.