A storm will pivot across the central United States this week and is likely to produce everything from severe thunderstorms to strong winds, a sharp change to colder weather and snow in some areas, AccuWeather meteorologists say.

Exactly how strong the storm becomes will determine the severity of the conditions from Tuesday to Thursday. But regardless of the storm's strength, adverse weather is likely to affect tens of millions of people from the Gulf Coast to the Great Lakes region. 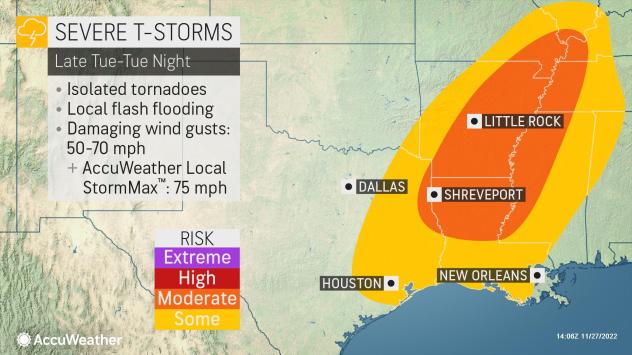 As warm and moist air begins to surge northward from the Gulf of Mexico on Tuesday, thunderstorms will erupt in the afternoon and night. At this time, it appears the risk of storms packing strong wind gusts, flash flooding and perhaps hail will focus on eastern Texas and western Louisiana to southeastern Missouri and western Kentucky. A couple of tornadoes cannot be ruled out, forecasters say.

The overall forward speed and strength of the storm system, along with how busy the zone over the Mississippi, Ohio and Tennessee becomes with clouds and showers, may determine the scope of severe weather on Wednesday. However, it appears there will be at least a slight risk of severe thunderstorms on Wednesday from eastern Louisiana to the Florida Panhandle to states as far north as Ohio and West Virginia. 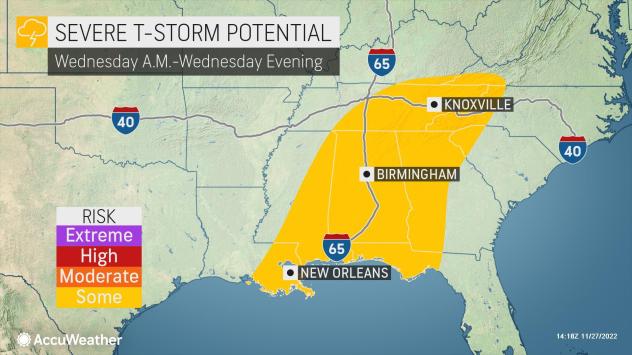 The storm system is likely to be strong enough to generate a significant amount of wind energy over the Great Lakes and Ohio Valley regions at midweek.

Locally higher gusts will be possible, which could lead to sporadic tree damage, power outages and lakeshore flooding in some areas. The storm system's gusty winds could also potentially cause flight delays and bouts of turbulence. 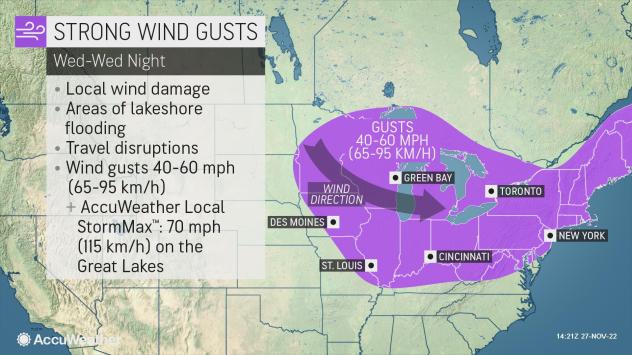 Strong winds can occur on both the warm and cold sides of the storm.

As the colder air charges in, a swath of accumulating snow is likely well away from the Rockies.

"There is the potential for a narrow band of snow that could put down an accumulation, perhaps on the order of 3-6 inches from central Iowa to northern Michigan from Tuesday night to early Wednesday," AccuWeather Lead Long-Range Meteorologist Paul Pastelok said. The exact amount and orientation of that expected snowfall may not be revealed until the storm actually starts to push east of the Rockies on Tuesday.

"Fast movement of the storm system may limit the amount of snow, just as it may limit the scope of severe weather," Pastelok said.

Regardless of the amount of snow, if any, over the Midwest this week, a sharp change to colder weather is in store from Tuesday to Thursday over the middle of the nation. 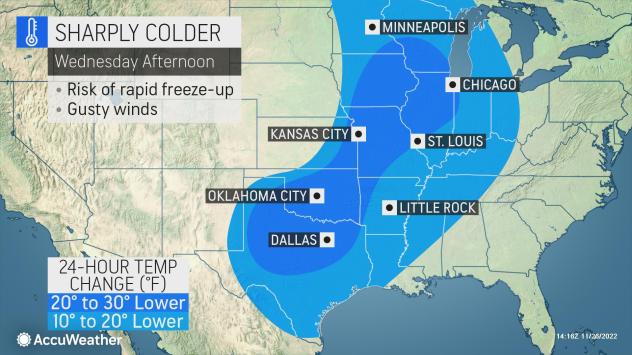 "Temperatures are likely to be slashed by 20-30 degrees Fahrenheit from Tuesday to Wednesday in places such as Dallas, Oklahoma City, St. Louis and even Chicago," Anderson said.

In Chicago, following temperatures in the 50s on Tuesday, colder air will sweep in Tuesday night and Wednesday. Temperatures may hover within a few degrees of the freezing mark on Wednesday with the potential for mixed rain and wet snow. AccuWeather RealFeel® Temperatures in the Chicago area may be no better than the 20s and could hover in the teens much of the day. 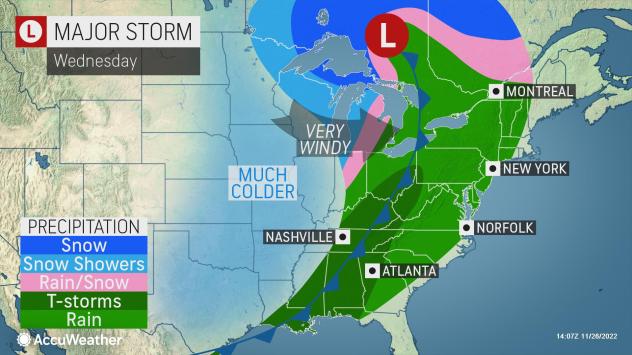 Meteorologists say motorists and property owners from the central and northern Plains to the Great Lakes region and perhaps the Ohio Valley should be prepared for a quick freeze-up during the middle of the week. While winds are likely to blow most roads and sidewalks dry where rain falls, any slushy areas from the leftover snow accumulation could freeze and lead to slippery travel.

As the cold air blows across the Great Lakes, bands of lake-effect snow are likely to set up from northern Michigan to the central Appalachians.