Hoping to capture a few shots of the wildlife or sunrise in one park, a photographer was shocked when he stumbled upon a “suspicious package” that washed ashore.

During a morning stroll on the beach along Florida's east coast, one photographer stumbled upon a shocking discovery when he spotted a "body-sized" steamer trunk washed up on the beach. The weathered look and rusted metal on the trunk not only made the photographer curious about its origin but also piqued the interest of people who saw the image on social media.

Mike O'Meally, the photographer who also goes by the nickname "East Coast Mike O'Meally," regularly shares photos of the shoreline, ocean and wildlife on his social media pages. But on Nov. 18, when he posted a set of pictures of a large trunk on the beach near the Fort Matanzas National Monument, which is roughly 56 miles southeast of Jacksonville, Florida, people were curious to find out more.

The photos showed the trunk next to some beach wood, merely feet away from the water. Among the three images, one appeared to show a sandbag attached to the trunk as if it was intended to sink.

Steamer trunk from 1930s washes up in Florida park

"This is about to get weird no matter how it plays out," O'Meally wrote in an Instagram caption.

O'Meally stayed with the trunk on Rattlesnake Island, located within the Fort Matanzas National Monument, until officials could show up.

"I kicked it, so it's empty. I can hear that it's hollow," O'Meally said in a Facebook video. "But I'd rather just have somebody else open it. I'll keep you posted."

When a team of park rangers from the National Park Service showed up to investigate the "suspicious package," they were able to determine roughly how old it was.

"What we found today is a vintage 1930s Steamer Trunk," the park service wrote in a Facebook update. "It is a brand called 'Neverbreak Trunks.'" It was manufactured by L. Goldsmith & Son of Newark, New Jersey, according to the NPS, and a manufacturing label can be seen in the photos of the trunk included in the park service's post.

But, the revelation that "nothing of interest" was found inside the trunk left people with more unanswered questions. 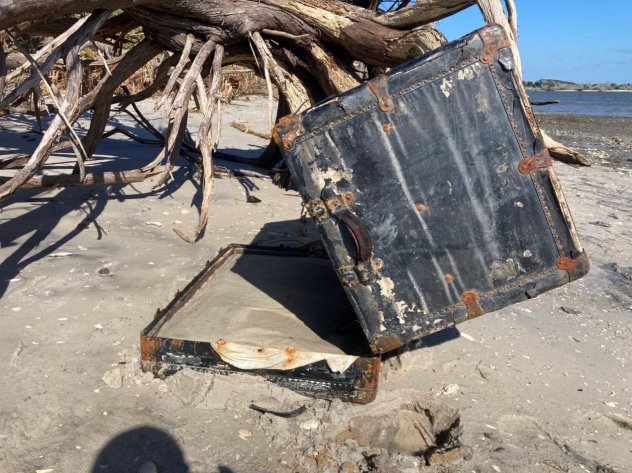 The trunk opened. Only sand was found inside the trunk. (East Coast Mike O'Meally Photography)

"Okay ... why was a sandbag tied to the trunk? Was there really just sand inside or maybe disintegrated bone fragments mixed in?" Carole Carter Whatley commented. "Further investigation is needed."

One theory proposed in the comments is far less supernatural.

"I would guess it came from one of those places that just collapsed from the last storm," Edith Black wrote in the comments.

When Hurricane Nicole made landfall along Florida's Atlantic coast in early November, it carved away portions of the beach and caused multiple homes to fall into the ocean in the coastal town of Wilbur-by-the-Sea. Following the rare November hurricane, over four dozen coastal buildings were deemed unsafe by county and municipal building inspectors.

Some speculate that the Gulf Stream could have carried debris from homes in Wilbur-by-the-Sea about roughly 43 miles north to where it was discovered by O'Meally.