Nearly two months after Ian devastated southwest Florida, affected families just want to feel normal again. With Thanksgiving near, two different non-profit organizations are cooking something up to make sure no family goes without a hot holiday meal.

As residents in southwestern Florida continue to recover from Hurricane Ian, the deadliest in decades and the most destructive hurricane of the year to affect the United States, two non-profit organizations are making sure no families are left without the opportunity to enjoy a traditional turkey dinner for the upcoming holiday.

Operation BBQ Relief, a national organization based out of Kansas City, Missouri, goes to disaster areas and provides people with one thing that all storm victims look forward to -- a hot meal. During the first few weeks after Ian, volunteers with Operation BBQ grilled, cooked and smoked more than 800,000 meals for storm survivors. John Imbriolo, the director of culinary arts for the non-profit, told AccuWeather National Reporter Bill Wadell that these meals mean more than one could imagine.

"Figure the worst possible day you could ever have. You've just lost everything that you own and you're trying to determine what do I do next? The last thing you're gonna think of is where's my next meal coming from, and quite honestly, that's one of the most important things after a disaster is to keep up your energy, keep your thought process, and you need to fuel your body," Imbriolo said. 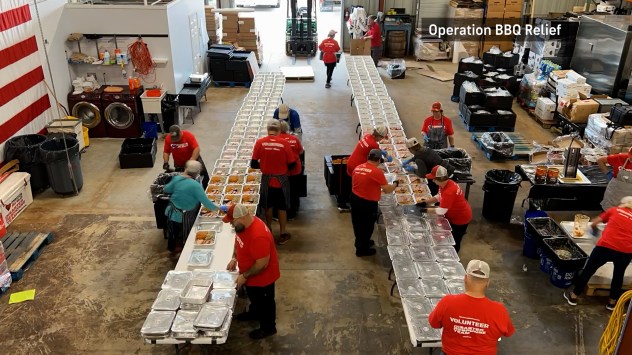 Now, weeks after providing food to storm survivors, Operation BBQ is back at it again in southwestern Florida, but they're cooking up something different than traditional barbecue. Just in time for Thanksgiving, the non-profit is making sure no family is left without a proper holiday meal with all the fixings.

"We have smoked turkey, we prepared green bean casserole, candied yams and then we have Hawaiian dinner rolls, some turkey gravy and some cranberry sauce," Imbriolo said.

The past two months have been anything but ordinary for people living in southwestern Florida. And one thing residents who weathered the worst of the storm want to feel again is some normalcy. By providing hot, homemade food to storm survivors, Operation BBQ is helping families work their way toward getting that feeling back.

Hurricane Ian made landfall on Sept. 28 as a powerful Category 4 storm. As it traveled across Florida, it lost wind intensity and weakened to a tropical storm before regaining strength again in the Atlantic Ocean. Ian is responsible for 131 deaths in Florida, making it the deadliest hurricane in Florida's history since 1935. According to AccuWeather Founder and CEO Dr. Joel N. Myers, the economic fallout from Ian is expected to total between $180 billion and $210 billion. 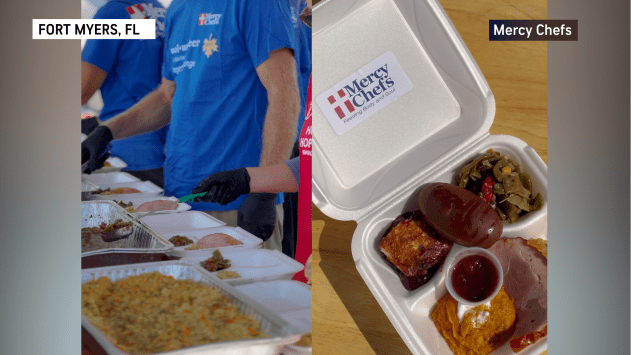 Thanksgiving meal from Mercy Chefs, which will be handed out to storm survivors in southwestern Florida.

It's not just Operation BBQ Relief that is back in southwestern Florida and cooking up Thanksgiving meals for families. Mercy Chefs, which is a non-profit disaster and humanitarian relief organization, served more than 400,000 meals to victims after Hurricane Ian struck. Now, they're back and making sure no one misses out on Thanksgiving dinner, even if that means they have to go door-to-door.

"We're still seeing a great deal of need in southwest Florida, so Mercy Chefs wanted to come back for the holidays," Gary LeBlanc, the founder and CEO of Mercy Chefs, told Wadell in an interview. "So many folks here in southwest Florida still [are] walking past the mounds of debris in [their] front yard. It's a constant reminder of the stress that they've been through."

Being able to provide something so simple as a Thanksgiving meal to these families has been one of the best ways to give back this season, LeBlanc said.

"We had a lot of people say we gave up on having Thanksgiving, there wasn't a lot to be thankful for, and there was no way we could cook a turkey," LeBlanc said. "To bring them that beautiful meal with ham, turkey and fresh mashed potatoes and sweet potato casserole, green beans and handmade desserts, was a real treat for them...In some cases, we went door-to-door to make sure we didn't miss anybody."