What is a cold front and how can it impact your plans?

Cold fronts are one of the most significant phenomena in terms of bringing changes in the weather and impact to outdoor plans.

A cold front marks the leading edge of a mass of air that is cooler than the air in front of it.

Meteorologists generally note a cold front as a blue line with triangles pointing in the direction of the advancing cool air on a weather map. 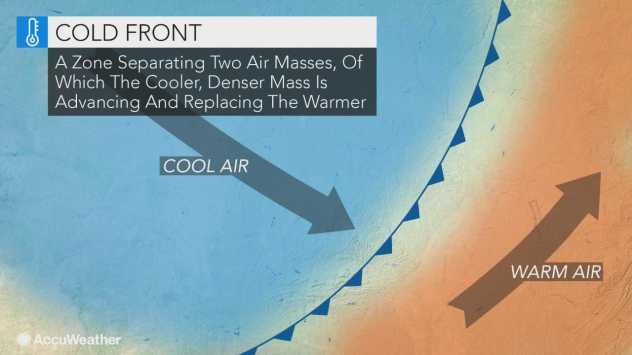 Since cool air is more dense than warm air, the advancing cool air lifts the warm air out of the way. This lift often creates clouds, rain and snow and can sometimes bring severe thunderstorms and even powerful wind gusts in lieu of any rain.

Sometimes, such as in parts of the Plains and Southwest, there may be no precipitation and little or no cloud cover marking the cold front.

Perhaps the most dramatic temperature plunge in the wake of a strong cold front occurred on Nov. 11, 1911. In approximately 12 hours, temperatures crashed from the 70s and lower 80s, to the lower teens over a broad area of the central United States. 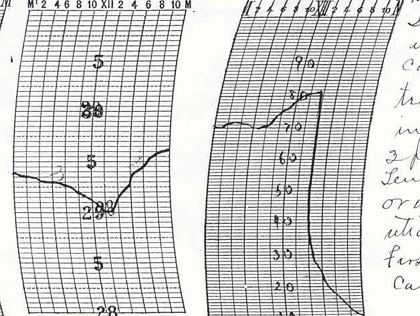 There was little warning of the front's approach and its consequences in those days.

In some cases, both record high and low temperatures were set for the same calendar day. While many of these have disappeared over the years with spells of more gentle rolling of warmth and chill, both records are still in tact at Oklahoma City. At the site, a record low of 17 and a record high of 83 remain for Nov. 11.

Powerful winds accompanied the cold front and continued for hours in the wake of its passage. The non-tornadic winds were strong enough to damage buildings.

The combination of wind, temperature and other factors probably resulted in an AccuWeather RealFeel® Temperature well below zero.

There were claims of people, including school children literally freezing to death as some left their homes in the morning with shorts and short sleeves and no coats. The victims may have became trapped and disorientated in the blizzard conditions and plunging temperatures.

The unofficial number of fatalities from severe thunderstorms, tornadoes and cold exposure topped 50 in the 1911 cold front.

More recently, some may recall the cold front of Jan. 16-19, 1977. The month and winter were among the coldest on record across the Midwest and East. Mountains of snow clogged the streets of Buffalo, New York.

"Just ahead of the mid-month cold front's arrival, temperatures jumped well-above freezing and even reached the 40s and 50s in some areas," according to AccuWeather Senior Meteorologist Dave Dombek.

"In a matter of hours, temperatures plummeted into the teens, single digits and below zero, and the frigid air was accompanied by a few inches of snow and blizzard conditions in the cold front's wake," Dombek said.

Despite warnings well in advance, travel became difficult and there were scores of accidents in the snow and rapid freeze-up from the Midwest to the Northeast.

The frigid air that settled into the southern United States in the wake of the cold front produced the only known snowflakes in South Florida.

It may be a bit chilly today, but on January 19, 1977, it was cold enough to snow! Do you remember when it snowed in Miami? pic.twitter.com/3cHT7IiGml

These are only couple examples as to why it is important not only for comfort, but also for safety concerns to check the local weather forecast. Even though a day may start balmy, conditions can change for the worse in the case of an powerful cold frontal passage.

Download the free AccuWeather app for the latest forecast information for your area.

How warm or cool a location is often depends on which side of the front the site is. In extreme cases, temperatures may reach the 80s and 90s to the south and east of the front, while areas a few dozen miles to the north and west may be in the 50s and 60s.

This sort of setup up can occur even in the middle of summer in portions of New England and the mid-Atlantic coast. In this case, the cold front may advance to the southwest and gain momentum by a flow of air off the chilly waters of the Atlantic Ocean. This variant is called a back-door cold front, because it generally moves in the opposite direction of routine weather systems that is west to east.

Cold fronts are often attached to storms and can be rapidly propelled southward and eastward by the circulation around a powerful storm.

Such a front tore across the Southern states in a matter of hours with severe thunderstorms during the Blizzard of 1992, otherwise known as the Storm of the Century.

However, sometimes the forward motion of a cold front may slow and stall, in which case the cold front is called a stationary front.

In another case, when the leading edge of cold air is no longer advancing, but rather retreating, the front is called a warm front.

In the case of a stalled or stationary front, there is the potential for not only a long-lasting extreme temperature contrast on either side of the front, but also long-lasting rain and snow. In such cases, there may be serious flooding or a debilitating snowfall.