Behind a cold front, cooler air will work its way into the Northeast early this week, but the relief from the heat will be short-lived as temperatures climb towards the end of the week.

It has been a weather roller coaster of sorts in the Northeast as of late, with temperatures surging and falling over the span of several days. AccuWeather meteorologists say more of the same is on the way, with a spell of cooler weather quickly being replaced by more hot weather before June comes to a close.

Heat and humidity gripped the Northeast and mid-Atlantic on Friday and through this past weekend. Saturday was the hottest day of the bunch for locations such as New York City, with temperatures in the city reaching 90 degrees Fahrenheit for the first time since May 31. In nearby Newark, New Jersey, the mercury soared to a scorching 96 F, in no small part due to the urban heat island effect often seen in the area. A bit farther west, Buffalo, New York, climbed to 91 F on Saturday. Average highs for the city near the end of June are in the upper 70s.

Farther south, thunderstorms dotted the mid-Atlantic and helped keep the heat in check. Baltimore climbed to 91 F on Sunday, while Richmond, Virginia, peaked at 90 degrees. While these temperatures are only a couple of degrees above average for late June, high humidity caused things to feel much hotter with AccuWeather RealFeel® Temperatures in the mid-90s. 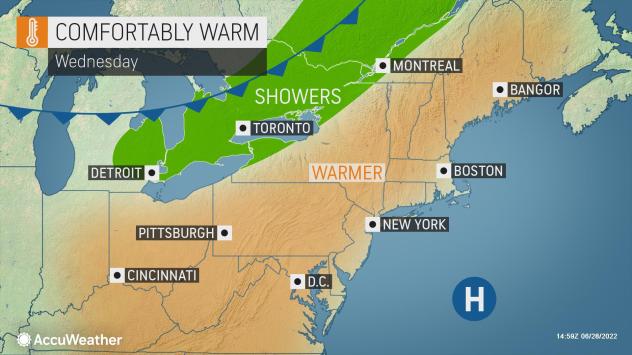 For those looking for a break from the heat to give their air conditioners a break, conditions will be rather cool with low humidity for late June into Wednesday morning.

Temperatures through Tuesday night will be several degrees below average. In New York City, temperatures failed to top 80 F on Monday, with a high of 77. Lows will be in the mid-60s in the Big Apple Tuesday night. High temperatures in Washington, D.C., trended downward to 83 degrees on Monday and are forecast to be 83 once again on Tuesday. Both are below the normal late-June high of 89 F.

"The cold front passing through the Northeast brought showers and storms to the Interstate 95 corridor on Monday but will usher in a cooler air mass behind it. As a result, the ongoing stretch of hot weather will immediately come to an end," said AccuWeather Meteorologist Andrew Kienzle.

Binghamton, New York, may have some of the region's coolest weather, with temperatures forecast to dip into the low 50s Tuesday night.

This window of slightly cooler and less humid air will bring a window of opportunity for folks to mow the lawn or do other work outside without having to keep an eye on the radar for approaching storms.

However, the return of cooler air and lower humidity levels is not predicted to last long. Temperatures will recover from the cool start on Wednesday morning to near seasonable levels in the afternoon. 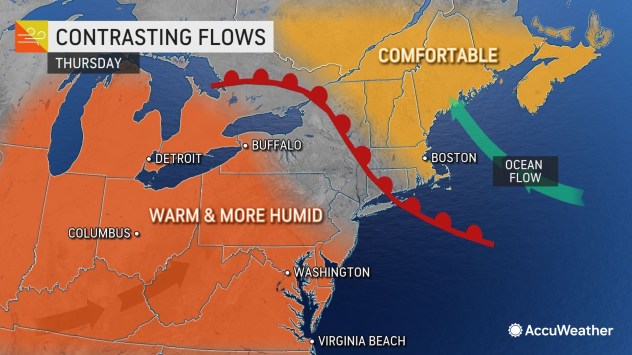 By Thursday, the dip in the jet stream responsible for the cooldown will pivot offshore, opening the door for heat and humidity to return just in time for the start of July.

By Friday, towns and cities along the Interstate-95 corridor will have the thermometer crest in the 90s once again, while areas in Virginia top out in the mid- to upper 90s F.

The heat will not just be limited to areas east of the Appalachian Mountains. Syracuse, New York, Cleveland and Pittsburgh are likely to reach the 90s on Friday. 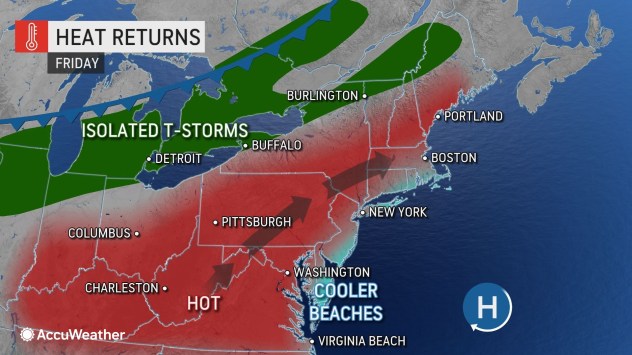 By Independence Day, another dip in the jet stream is likely to usher in more seasonable temperatures, putting an end to the heat, but also bringing the risk of disruptive showers and thunderstorms.