If you’ve ever wondered why it can sometimes feel stiflingly hot as your clothes quickly dampen on a summer afternoon, humidity is the likely culprit.

Because of humidity, which is a measure of the air’s water vapor content, the body’s perspiration evaporates from the skin at a much slower rate.

“Evaporation is a cooling process,” said AccuWeather Senior Meteorologist Dave Dombek. “If you step out of the pool or a lake, you get a chill because the air is very dry, and that water almost instantly starts to evaporate off of your skin so that it cools it.”

According to the MIT School of Engineering, the rate at which water or sweat evaporates depends on the level of water currently in the air. 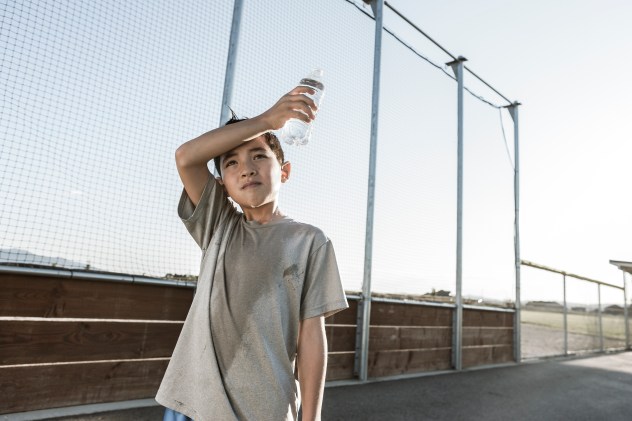 The water-saturated air causes your clothes to feel drenched in sweat, especially while wearing certain fabrics such as cotton, which can soak up and retain moisture.

“It just lays on your skin,” said Dombek. “That’s why you feel much more uncomfortable.”

When sweat can’t evaporate, the body can’t regulate its temperature, according to the National Weather Service (NWS).

In contrast, engaging in physical activity in dry, normal conditions will cause any sweat to evaporate quickly from the skin.

While the term “relative humidity” is common, the dew point temperature may be a better indicator of the level of water present in the air, according to Dombek.

The NWS defines relative humidity as “a dimensionless ratio of the amount of atmospheric moisture present relative to the amount that would be present if the air were saturated.”

“The dew point temperature is essentially the temperature to which you have to cool the air to get saturation,” said Dombek. “It’s a really good measure of how much water is actually in the air.”

According to Dombek, the dew point temperature varies for different regions.

“[For instance,] in the Midwest or the northeastern Atlantic states, if you get dew points in the 50s or lower, it would be considered comfortable,” he said. “Once you get to about 60 to 65 dew points, it’s moderately humid.”

Heat exhaustion vs. heatstroke: What are the warning signs and how should you react?
What does extreme heat do to the human body?
Experts share nutrition tips for reducing heat illness risk among youth athletes

“It’s not extreme or very oppressive, but you start to feel it when the dew point’s in that range,” he added.

Humidity begins to feel even more noticeable as dew points reach between 65 and 70 degrees Fahrenheit.

“[For] northern Michigan, upstate New York or northern New England, [that dew point range] is almost to the point of being oppressive because they’re not used to it,” Dombek said.

Dew points above 70 F, which are common in Florida during summer, are considered to be oppressive.

The AccuWeather RealFeel Temperature® factors in more than just the humidity or temperature, like the heat index does.

Since its creation in the 1990s, the RealFeel Temperature has taken into account the many different elements that impact how it actually feels outside.

Though arid conditions may feel more comfortable than a sticky, humid day, dry heat can also be more dangerous because you may not realize you’re sweating, Dombek said.

“[When] you’re exerting yourself [by] taking a 10-mile hike or running, you feel great because you don’t have perspiration on your skin, it’s evaporating,” Dombek said.

Meanwhile, the body loses lots of water, increasing the likelihood of dehydration, he said.

“It doesn’t matter whether it’s humid or dry,” Dombek said. “At a certain temperature and after so much physical exertion, you’re going to lose a certain amount of water.”

Tropical depression could form in southwestern Gulf of Mexico