Over 40 million Americans are expected to travel for the upcoming holiday weekend and AccuWeather forecasters have released an outlook to highlight where the weather could cause the most trouble.

The upcoming July Fourth holiday across the country will be hit or miss in terms of the weather, AccuWeather forecasters say, but a prolonged washout that would dampen the entire three-day stretch is not currently expected.

Abundant moisture from the Atlantic and Gulf of Mexico will contribute to some afternoon and evening thunderstorms from the interior Southwest to the Southeast states and could interfere with travel and outdoor plans during the holiday weekend.

The moisture can also bring storms to parts of the northern Rockies to the Midwest and Northeast as well, but those are expected to be fairly brief, according to the latest AccuWeather forecast.

A near-record amount of people are expected to travel more than 50 miles from home during the Independence Day weekend, according to a press release by the American Automobile Association (AAA).

"People are ready for a break and despite things costing more, they are finding ways to still take that much-needed vacation," AAA Senior Vice President of Travel Paula Twidale said. Despite the average price of gasoline close to $5 a gallon, AAA expects a record 42 million will travel by car during the holiday with the overall amount of travel (car, air and other means) at 47.9 million. The figure is just below 2019's record of 49 million.

Areas of the country most likely to be dry most often from Saturday to Monday will be along the Pacific coast to the northern Plains, the Great Lakes and the northern tier of the Northeast, AccuWeather Meteorologist Bandon Buckingham said. 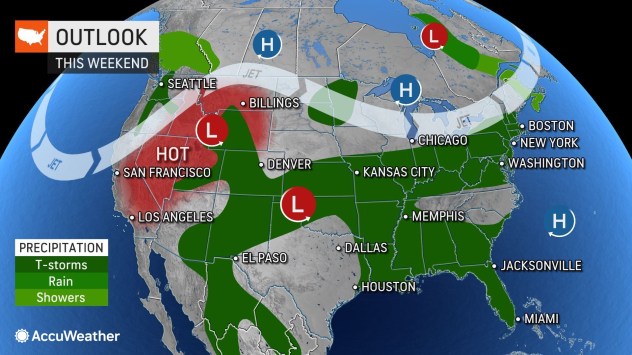 "A cold front will push southward early enough during the long holiday weekend so that most of the time is free of rain for much of the zone from Minnesota to Michigan," Buckingham said. "From Chicago and Detroit and to points north to the Canadian border, the weekend looks largely dry and settled with seasonable warmth and low to moderate humidity levels."

Farther to the east, most areas from upstate New York and northern Pennsylvania to Maine will be free of rain most of the time from Friday night through Monday night. However, the same cold front has the potential to bring thunderstorms for one of the days or part of a day in this zone from Saturday to Sunday, AccuWeather Senior Meteorologist Joe Lundberg said. Another front could bring part of upstate New York and northern New England a shower on Monday afternoon or evening.

No rain is anticipated in California, where drought conditions and water restrictions will continue in much of the state. Bans on fireworks and any open flames, such as campfires, are likely to remain in place.

"The incoming western storm can kick up gusty winds from the Sierra Nevada through the Great Basin and into the interior Northwest, which by itself can raise the risk of wildfire ignition and rapid spread," Buckingham said.

From portions of Arizona and Utah and all the way to the southern Atlantic and mid-Atlantic coasts, enough moisture will be present in the atmosphere for the risk of not only pop-up afternoon and evening thunderstorms each day, but also the potential for multiple downpours and thunderstorms on more than one of the three days of the weekend.

Even though a storm from the Pacific is forecast to swing toward the West Coast this weekend and struggle to bring any shower activity to Central and Southern California, the storm is likely to pump moisture northward from the Gulf of Mexico and release that moisture in the form of drenching showers and thunderstorms for parts of the central and eastern U.S. The storm has the potential to bring a shower or thunderstorm from parts of Northern California to Washington sometime from Sunday to Monday.

At the same time, the cold front is likely to stall in the zone from the central Plains to near the Ohio River and the Chesapeake Bay region. Along the front and on south toward the Gulf of Mexico will bring plenty of thunderstorms on the prowl.

Weak disturbances roaming about these areas can enhance the thunderstorms from time to time, in which case the chance of localized flash flooding can increase, along with isolated strong wind gusts that can break tree limbs and lead to sporadic power outages. Cities at risk for locally heavy, gusty thunderstorms include Atlanta, New Orleans, Orlando and Houston.

During late June and early July, with the days being so long and resulting in many hours of heating from intense sunshine, any thunderstorm that erupts can become severe for a short time, Buckingham said. 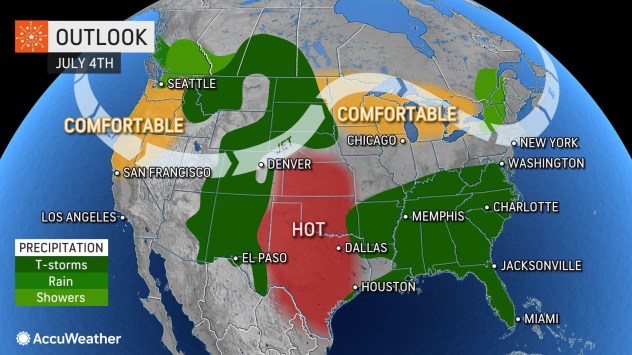 AccuWeather meteorologists will be monitoring the forward progress of the cold front closely. There is the potential for the front to slow and stall as it reaches the central Plains, Ohio Valley and mid-Atlantic region during the middle and latter part of the three-day weekend.

"Right now, it looks as those the forward speed of that front will be significant enough to allow dry and cooler air to sag into much of the Northeast, including Philadelphia, New York City and Boston for Sunday and Independence Day," Lundberg said.

If the front were to stall, the risk of showers and thunderstorms might continue through Sunday and perhaps Monday in the Northeast. The weather in Washington, D.C., is forecast to improve on Monday, but a thunderstorm still cannot be ruled out. A stalled, rain-producing front could potentially impact viewing of firework displays across the region. Areas farther to the south from near the Mississippi River to the Atlantic coast will be at greater risk for thunderstorm activity all three weekend days. 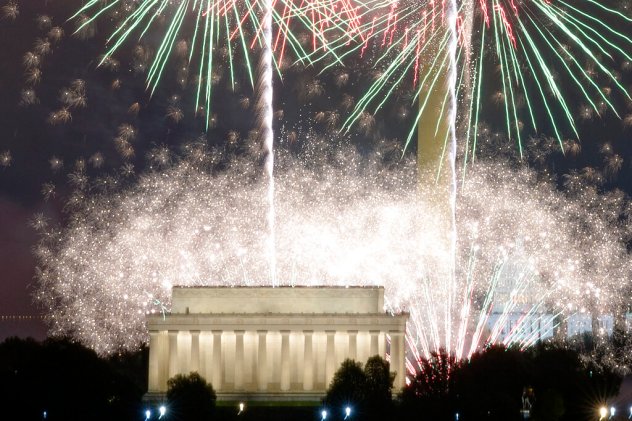 Fireworks explode over Lincoln Memorial, Washington Monument and U.S. Capitol, at the National Mall, during the Independence Day celebrations, in Washington, on Sunday, July 4, 2021

With a widespread zone of thunderstorms expected over the busy Independence Day weekend when millions will be outdoors, the risk of lightning strikes and potential injuries and fatalities will increase substantially.

People who will be spending time outdoors over the holiday weekend are encouraged to monitor the weather for changing conditions and move indoors or seek shelter in a hard-top vehicle at the first rumble of thunder, experts warn.

Over the past decade, an average of 13 people are killed by lightning every year by the middle of July, according to a recent study by the National Lightning Safety Council. As of the end of June, there has been just one fatality attributed to lightning for 2022, but a near-fatal lightning incident occurred off the coast of Florida this past weekend.

One area of the country is notorious for sudden lightning strikes during the summertime, forecasters say.

"People hiking over the interior West should be on the lookout for building clouds that can produce lightning with little notice," Buckingham said. The worst place to be is on top of a mountain with little or no tree canopy when storms build and lightning bolts start to fly. A morning hike is often the best choice as the timing can allow people to be off the mountain by the early afternoon hours when the risk for storms is at its highest, experts advise.