The lightning strike left the boaters stranded in stormy weather and miles from shore, with one passenger describing the harrowing ordeal as an “out of body experience.”

A group out fishing in the Gulf of Mexico credits an emergency position-indicating radio beacon for getting them help after their boat was hit by lightning.

Seven people were rescued by the United States Coast Guard on Saturday after a lightning bolt struck their 39-foot boat off the coast of Clearwater, Florida, disabling it far from shore and in the middle of a vicious storm.

The group, which was participating in a fishing tournament, accidentally captured video of the moment lightning struck the boat. While people on the boat posed for the video, lightning suddenly struck the vessel. After a flash of bright white light appeared, orange sparks flew all around and smoke wafted from the impact site. One of the passengers on board could be heard letting out a scream before the camera drops to the floor and stopped recording.

"The outrigger that actually got struck exploded into splinters and was on fire when it landed," co-captain Glenn Rumer told Today. "The motors, the electrical, everything went out. We were completely dead in the water." 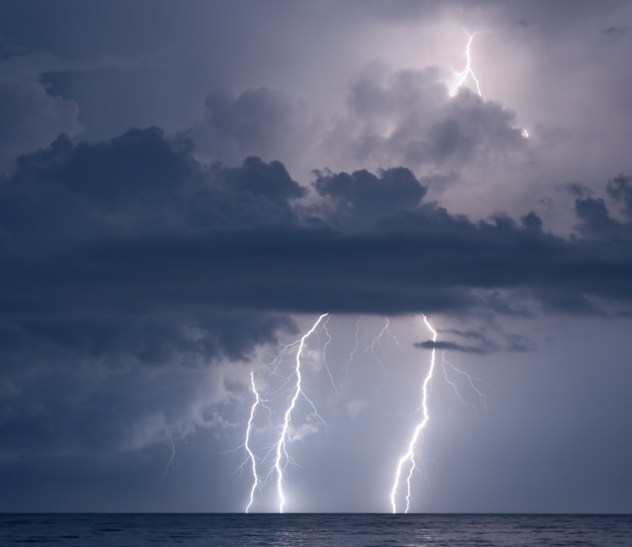 With the boat left non-operational by the lightning strike, the passengers, who were miraculously uninjured, immediately went into survival mode. Even before the boat was struck by lightning, the crew had already decided to head back to land soon after the weather had taken a turn for the worse.

Rumer and another passenger told Today that the boat was battling winds up to 35 mph, 6-foot waves and constant lightning when they decided to head back to shore about 100 miles off the coast of Clearwater.

"I've been through storms. I've had lightning around me in the past, but nothing like this," Rumer said. "The amount of lightning strikes was more than I've ever experienced," Rumer told Good Morning America. "It was overwhelming."

Chris Vagasky, a meterologist and lightning applications manager at Finland-based lightning research firm Vaisala, said that lightning often occurs over the ocean and in the Gulf of Mexico.

"Lighting will occur anywhere there is the right ingredients for it, so anytime you have atmospheric instability and moisture and a source of lift you can get thunderstorms, so no matter where you are you do need to be aware of the threat lightning poses," Vagasky told AccuWeather National Reporter Bill Wadell.

Vagasky said that the Gulf of Mexico often has ample moisture and instability to birth thunderstorms during the month of June, adding that outdoor activities near the water are extremely dangerous when lightning is occurring in the area.

"When you are out, especially 100 miles off the coast, there is nothing else around you, it's you and the water, so you really need to be aware of the storms and the weather around you at that point," Vagasky said.

One passenger, Josh Guy, was the only one to actually feel the lightning bolt pass through him, and it briefly knocked him unconscious.

"It is very hard to put into words, almost like an out-of-body experience. It took me around 5 minutes or so I'd say to come back to understanding what was going on," Guy told Good Morning America.

While Rumer sent out a distress signal using the boat's radio beacon, his sister, Sherrie Kelley, helped guide the other five passengers, including Guy's pregnant girlfriend, down below deck.

By the time the Coast Guard Air Station Clearwater MH-60 Jayhawk helicopter arrived to airlift the seven passengers to safety, it had been more than 2 hours of terror below deck, and the frightened group was very relieved to be rescued.

"I love them all," Rumer told Today about the Coast Guard. "They’re all angels. Angels of the water."

Petty Officer Third Class Erik Villa said that the savvy boaters were rescued rather easily despite being far offshore because they had an emergency positioning indicating radio beacon.

"Once the device hits the water or there is an emergency situation you can activate it, and it starts transmitting a signal to position yourself and it shares that position with emergency services," Villa told Wadell, saying the Coast Guard uses those signals to help people in distress.

Florida took back its title as the lightning capital of America in 2021, with 85.99 strikes per square kilometer impacting the Sunshine State. On average, more than 3,500 cloud-to-ground lightning strikes occur there each day. Florida also leads the nation in lightning deaths per year.

Earlier this year in Tampa, two people were struck by lightning at a spring training game between the New York Yankees and the Atlanta Braves. Both survived being struck, but were sent to the hospital with injuries. The first fatal lightning strike of the year in the United States was recorded in California last week when a woman and her dogs were killed while out on a walking trail in the Los Angeles area.