Why Florida ranks highest for lightning fatalities in the US

While Florida is known as the Sunshine State, it is notorious for thunderstorms, lightning strikes and fatalities.

On average, Florida has 3,500 cloud to ground lightning flashes per day and 1.2 million flashes per year occur, during a recent 10-year study according to Vaisala. 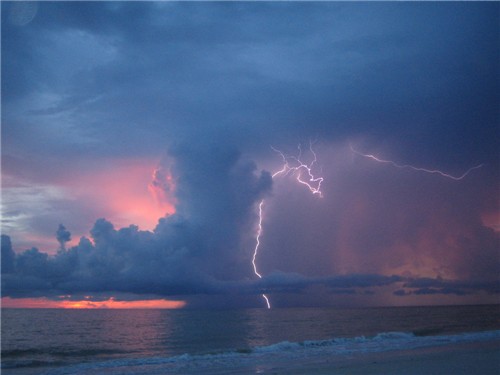 This photo of a thunderstorm was taken near Indian Shores, Florida, on Aug. 29, 2006. (AccuWeather Fan Photo / gh)

Florida ranks fourth in the nation for lightning flashes behind Texas, Oklahoma and Kansas.

However, because of the dense population and the amount of people that spend a great deal of time outdoors year-round, more people are struck and killed by lightning in Florida than any other state, according to Vaisala and the National Weather Service.

The combination of heat, humidity and sea breezes on both the Gulf and Atlantic coasts makes the perfect breeding ground for thunderstorms over the Florida Peninsula.

A sea breeze is simply a push of air from the ocean that usually brings a drop in temperature or humidity level during the daytime. This occurs since ocean temperatures often lag behind air temperatures. 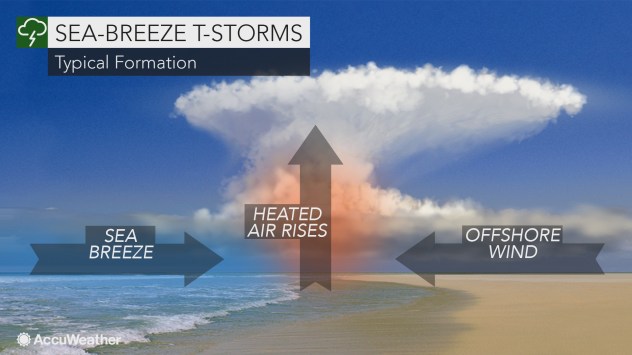 As a result, areas between the ocean and the temperature boundary, or sea breeze front, are usually protected from clouds and rain during much of the day.

7 lightning safety tips if you’re caught outside during a thunderstorm
Men vs. women: Which gender is more likely to be fatally struck by lightning?
Lightning kills: Which outdoor activity ranks no. 1 for fatal strikes?
How a single lightning strike can claim many lives
What happens when the body is struck by lightning? 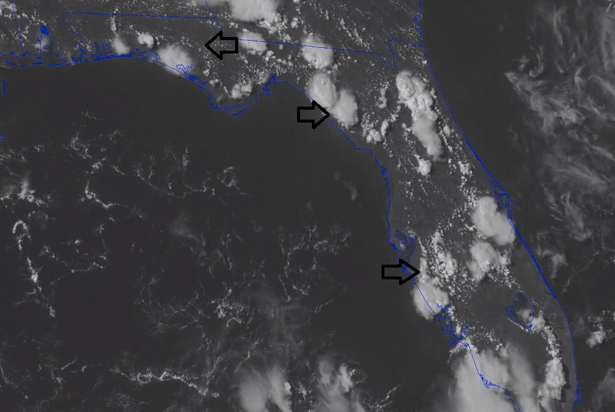 On this closeup image of Florida, the small dots represent clouds and spotty showers along the sea breeze boundary surrounding much of the coast. Meanwhile, the large patches of white are thunderstorms (arrows). Most of the beaches along the Atlantic coast are free from clouds and showers in this image. The sea breeze is much strong on the Atlantic side of Florida as opposed to the Gulf of Mexico side. (NOAA/Satellite)

At the beach, a shower first thing in the morning is often not the character of the entire day. During the daytime, the sea breeze generally advances farther inland. Likewise, showers drift inland as the day progresses. 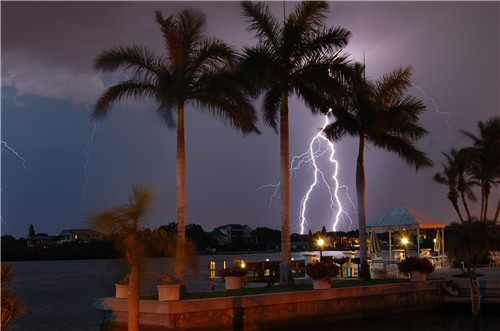 This photo of lightning was taken from Siesta Key, near Sarasota Bay, Florida, on May 24, 2008. (AccuWeather Fan Photo / beitzdk)

When winds aloft are light, the timing of such a storm can occur at roughly the same time every day. Such is the case over the Florida Peninsula during the late spring and summer.

Sometimes, two sea breeze fronts may join up and produce robust thunderstorms. This is also a common occurrence over the middle of the Florida Peninsula during the late afternoon and early evening hours in the summertime.