Road crews have been out and about in the Phoenix area this spring and summer, but not just to fix potholes. Instead, they are conducting a mission to battle the brutal summer heat.

Transportation officials in Arizona say a special treatment on residential streets to reduce heat absorption is paying off and they’re expanding the project.

With temperatures that regularly soar into the triple-digits and an unusual stretch in June during which temperatures soared to 113 degrees Fahrenheit or higher for several days, the city of Phoenix has concocted a new method of keeping the area cool throughout the summer months.

Road crews have been out working in Phoenix-area streets, but not just to pave or patch potholes. The city's Street Transportation Department has sent out crews on a unique mission: to spray a special solution onto dark-colored streets in order to create "cool corridors."

The solution, which, according to officials, contains no harmful materials, paints over the roadways to make them a lighter grey color, therefore less absorbent to the hot local climate. 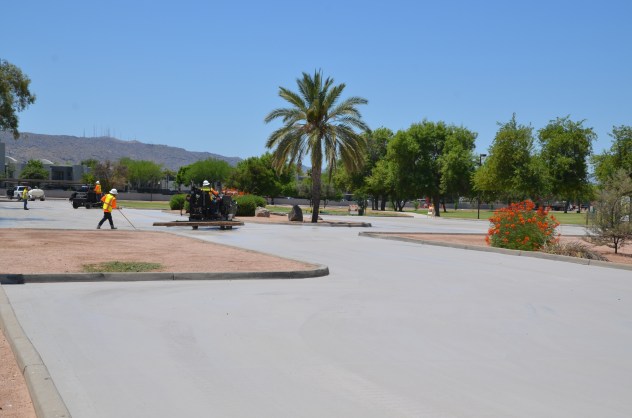 The program, which is now in its second year, comes just in time for the scorching Valley of the Sun. Phoenix heat reached record-breaking levels in June, shattering a daily record on June 10 by topping out at 113. On June 12, temperatures went even higher, growing to 114 and tying a daily record that has been around for over 100 years, set in 1918.

Pavement that is of a darker color keeps heat entrenched in roadways, adding to the sweltering environment, according to the city's street transportation officials.

Phoenix is one of several cities in the United States that experience urban heat island effects due to heat retention within the built-up environment, with data from the U.S. Environmental Protection Agency showing the true breadth of that effect. The EPA study found that nighttime temperatures in heat island areas can be up to 22 degrees higher than temperatures measured outside the area. 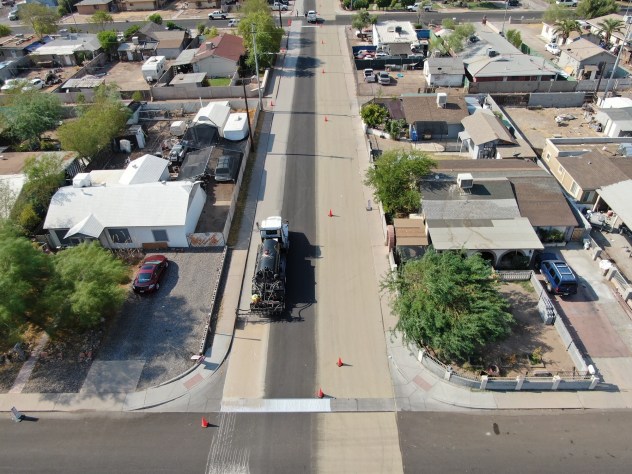 "In Phoenix, where we can have 115-degree summer days, it holds on to that heat and releases it slowly," the transportation department's Communications and Public Engagement Coordinator Heather Murphy told AccuWeather National Reporter Bill Wadell. "What we've seen over time is ... temperatures really creeping up."

Murphy said that the program has been a success thus far, with about 40 miles of residential streets already treated with a non-harmful combination of asphalt, water, emulsifying agents, mineral fillers, polymers and recycled materials. The pavement has no reflective layer, and the experience for motorists is similar to driving on concrete highways.

Traditional Asphalt side by side with the Phoenix Cool Pavement program shows the difference in surface temperatures during the blazing afternoon hours. (Photo via Phoenix Street Transportation Department)

Results of the first year of the Cool Pavement Program showed that surface temperatures using the lighter color were between 10.5 and 12 degrees cooler than the typical Phoenix street pavement during afternoon hours. Lower surface temperatures were recorded at all times of the day versus traditional asphalt, averaging 2.4 degrees lower than asphalt at sunrise.

The pilot portion of the program was such a success that it became a regular part of the Street Transportation Department's operations in October 2021. Continued studies will determine if the pavement product will mitigate the heat island effect in the city.

The project is part of a city initiative to make "more livable" neighborhoods in places without much shade coverage during the summer months.

"We will be continuing to study, especially the longevity and durability, and how the material stands up to our brutal summer heat and sunshine," Murphy said.