The legendary Jumbo Floating Restaurant capsized and sank on Sunday as it was being moved. Days later, it was still unclear if weather or other factors contributed to the incident.

Hong Kong landmark Jumbo Floating Restaurant capsized while it was being transferred to a new location after closing due to the coronavirus pandemic in 2020.

Hong Kong's legendary Jumbo Floating Restaurant now lies at the bottom of the South China Sea, just days after it was towed away from the city, Aberdeen Restaurant Enterprises, the parent company, said on Monday.

The 46-year-old landmark was slated to be refurbished at an undisclosed location in China after plans to restore it in Aberdeen, located in Hong Kong's Southern District, fell through. Last Tuesday, it was towed out of the city, Hong Kong Free Press (HKFP) reported.

According to a statement from the parent company, the restaurant was passing the Xisha Islands, also known as the Paracel Islands, in the South China Sea, when water entered the vessel as it encountered "adverse conditions," which made the boat start to tip, according to reporting by HKFP. The company did not elaborate on what constituted the adverse conditions but said that efforts to save the vessel failed and it sank after capsizing on Sunday. No one was injured.

According to Aberdeen Restaurant Enterprises, the accident occurred where the water is more than 3,280 feet deep, a depth that would have made it "extremely difficult to carry out salvage work," The New York Times reported. 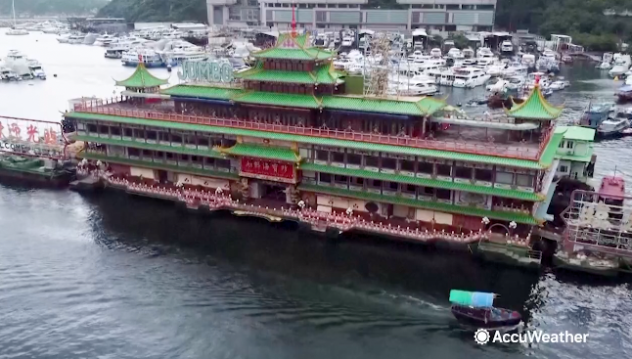 Although there is no direct evidence to suggest foul play, speculation arose online that the boat may have been sunk for insurance purposes. Stephen Ng, a spokesman for Aberdeen Restaurant Enterprises, declined to comment on the speculation, according to the Times.

Temperatures in Hong Kong over the weekend topped out in the high 80s, just above what's normal there for this time of year. There was also a bit of unsettled weather throughout the region in recent days and weeks, AccuWeather Meteorologist Tony Zartman said. He added that "there were clusters of thunderstorms all around that area through the weekend." Zartman said it was possible that "one of those clusters of storms [could have] briefly produced stronger winds and higher seas" but couldn't provide any more specific weather information relative to where the boat was located when the incident occurred.

The 260-foot-long, three-story-tall eatery has been a landmark in Hong Kong for more than four decades, The Associated Press reported. According to its website, since opening in the 1970s, the ship has served Cantonese cuisine to over 30 million guests, practically everyone from Tom Cruise and Queen Elizabeth II. Along with making cameos in other blockbusters, the floating restaurant was featured in the 1974 James Bond film The Man with the Golden Gun.

As Hong Kong was grappling with its first wave of COVID-19 infections in March of 2020, the restaurant ceased operations, closing its doors and laying off all its staff.

After closing, Aberdeen Restaurant Enterprises offered to donate the Jumbo Floating Restaurant to a local theme park at no cost since the company could not afford to keep up with maintenance and inspection costs. 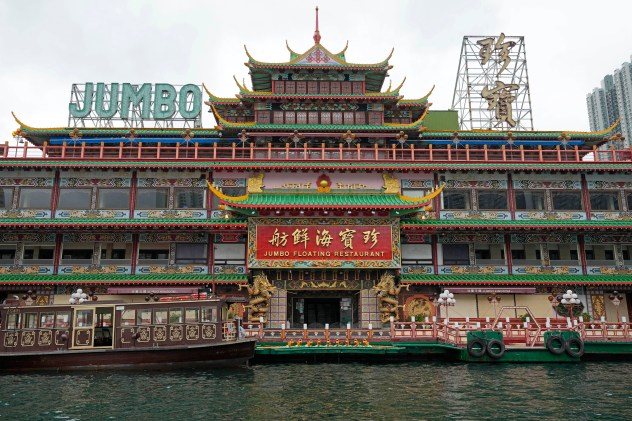 FILE - The last Chinese imperial-style Hong Kong Jumbo Floating Restaurant, which has been featured in many local and international movies over the years, is seen in Hong Kong on June 13, 2022. The restaurant has capsized in the South China Sea less than a week after it was towed away from the city, its parent company said Monday, June 20, 2022. (AP Photo/Kin Cheung, File)

Carrie Lam, Hong Kong's chief executive, stepped in with a plan to "invigorate" the South District, HKFP reported. She said the government would cooperate with the theme park and other local nonprofit organizations in the "rebirth of the floating restaurant." But Lam's plan quickly fizzled out when the theme park could not find a suitable third party to take over operations.

Lam announced just last month that the government would not invest any taxpayer money in the vessel, which had already accumulated nearly $13 million (HK$100 million) of losses in the past decade, HKFP reported.

Aberdeen Restaurant Enterprises planned to move the vessel to a lower-cost site, where maintenance could be carried out, the AP reported. In order to avoid disturbance at the new site, the company did not disclose where exactly the vessel was heading.

Two days after Aberdeen Restaurant Enterprises announced it would move the Jumbo Floating Restaurant, part of the kitchen barge, which floated off the restaurant, sank, local news source RTHK reported.

Before its departure, all relevant approvals were obtained, the vessel had been thoroughly checked by marine engineers, and hoardings were installed.

"The company is now getting further details of the accident from the towing company," a statement from Aberdeen Restaurant Enterprises, the AP reported.

Worst flooding in decades kills at least 100 in Bangladesh, India