A major winter storm that unleashed dangerous conditions with snow and ice across the Southeast on Sunday brought steady snow to portions of the Northeast on Sunday night and will continue to charge up the Eastern Seaboard on Monday. The heaviest snowfall will accumulate across interior parts of the Northeast, unloading accumulations that could bring some communities to a standstill. A blast of winter weather impacted big cities along the I-95 on Sunday evening, but hazards largely shifted over to heavy rain and strong winds as the storm progressed.

Winter storm warnings and winter weather advisories were plastered across much of the Northeast prior to the storm's arrival. 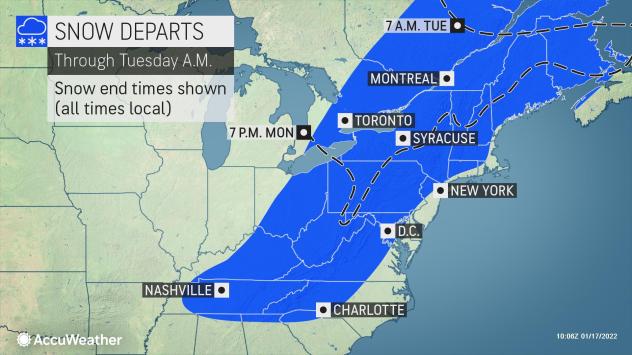 After dumping heavy snow on parts of the Plains and Midwest, the storm system took aim at the Tennessee Valley and the Southeast. AccuWeather forecasters say 100 million Americans will feel the effects of the winter storm.

Along the I-95 corridor, where the center of the storm tracked, warm air was drawn in from the Atlantic Ocean, causing rain to fall throughout most of the storm. But, even the major cities of Washington, D.C., Baltimore, Philadelphia, and New York City were hit with a brief dose of snow or a wintry mix on Sunday night. The wintry precipitation rapidly covered roads and made for slippery travel at the onset of the storm before any accumulation was washed away by rain in these places as the night progressed.

About 2 inches of snow fell across Washington, D.C., before the snow turned to rain and freezing rain. Baltimore was struck with about 2.5 inches of snow before rain and freezing rain fell. About a half of an inch of snow fell before the rain in Center City, Philadelphia, and in New York City snow turned to rain just after 11 p.m. on Sunday night. Due to warm air, Boston is expected to receive only rain from this event through Monday afternoon.

From that stretch of the I-95 corridor to the beaches, several hours of heavy rain and strong winds could trigger urban flooding and sporadic power outages. On the barrier islands and along the shores of some of the back bays, minor to moderate coastal flooding is likely due to the storm’s easterly winds and the astronomical effects of the approaching full moon on Monday. Gusts will frequently reach 40-60 mph along the coast, with the potential for an AccuWeather Local StormMax™ gust near 80 mph on some of the islands and capes from the mid-Atlantic to New England. Some thunderstorms may even rumble along the coast.

On Saturday night, AccuWeather reporter Jillian Angeline described running into electrical linemen from Oregon on a flight to Boston. They were being called in to prepare for the extensive power outages expected across the Northeast. 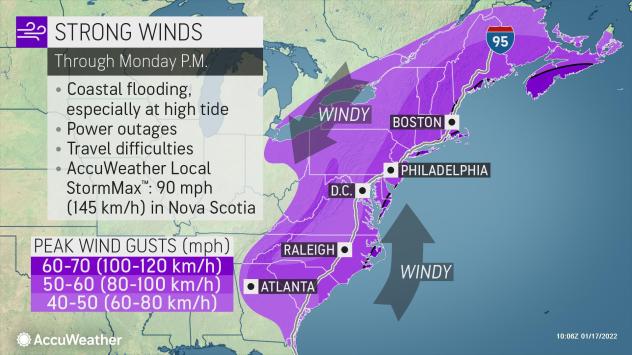 Farther inland, the northern and western suburbs of the I-95 cities will lie within a battle zone between warm and cold air associated with the storm. Heavy snow will transition to sleet, freezing rain and rain in areas north and west of Washington, D.C., to New York City and Boston, according to AccuWeather Chief On-Air Meteorologist Bernie Rayno.

Travel over the zone from 25 miles to 75 miles northwest of the I-95 from northern Virginia and central Maryland to Massachusetts and New Hampshire will be a mess. Roads could turn from snow-covered to slushy and icy in some areas, AccuWeather forecasters warn. Motorists in southeastern Pennsylvania, northwestern New Jersey, the lower Hudson Valley of New York state and central New England could all face the sloppy to dangerous travel conditions.

Areas farther to the west will be in the heart of the snowstorm, which won't reach the intensity or output of one of yesteryear's most infamous winter storms. The storm’s intensity, fast movement and a sweep of dry air may prevent a repeat of the Blizzard of '93, which unleashed a widespread 2-3 feet of snow, high winds and mountainous drifts in the Appalachians. Still, at the height of this storm from on Monday, travel may be extremely difficult to impossible in the region. Thundersnow could accompany this snowstorm as an indication of its formidable strength. 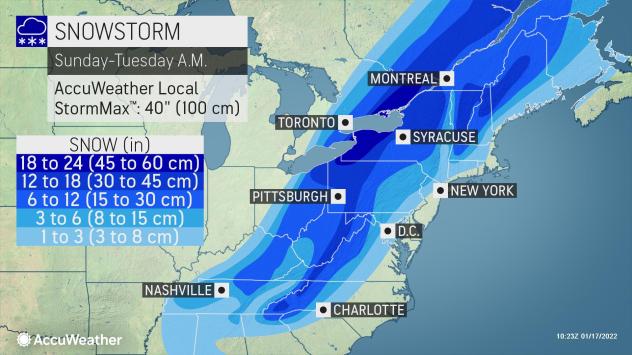 "The storm will move swiftly northeastward with the heaviest snow lasting only about six hours and most of the snowfall spanning about 12 hours," AccuWeather Senior Meteorologist Bill Deger said. However, the intense rate of snowfall will make up for its short duration.

In the heart of the snowstorm, travel along major highways in the area, including along interstates 81, 87 and 99 that run along the spine of the Appalachians as well as interstates that pass from west to east through the mountain chain, could be shut down.

Over the Appalachians, snow will fall at the rate of 1-3 inches per hour with blowing and drifting snow that can reduce the visibility to near zero at times and may make it difficult for road crews to keep up. Motorists that plan on traveling along portions of interstates 64, 68, 70, 76, 77, 80, 86, 90 and others will run into the heavy snow and the potential for treacherous conditions. 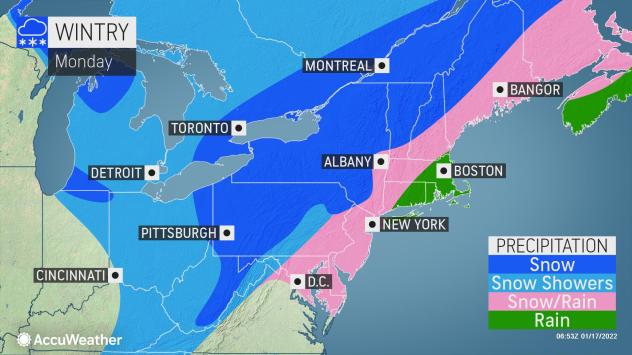 AccuWeather is projecting a broad area of 6-12 inches of snow accumulations throughout the Appalachians, and even into portions of Ohio, western New York state and the St. Lawrence Valley along the United States-Canada border. Within this zone, bands of 12-18 inches of snow will occur with an AccuWeather Local StormMax™ of 40 inches. Snow totals approaching 3 feet or more are most likely over the ridges and peaks of the Appalachians, Adirondacks, the Green and White mountains and an area from southwestern New York to just north of Lake Ontario. 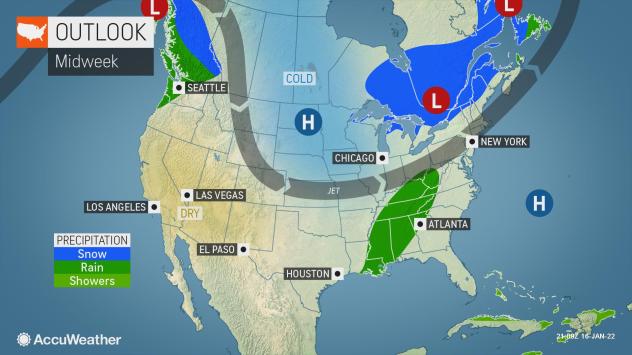 The blast of wintry weather will end as quickly as it arrives. Snow will quickly wind down from southwest to northeast through Monday night. Some blowing and drifting of snow will continue to occur in the wake of the storm, but after that, conditions should be favorable for crews to begin clearing roads.

Just as a fresh injection of cold air will help set the stage for the major winter storm, cold air will rush in the wake of the system on Monday night. Any wet and slushy areas will freeze, leaving untreated roads, sidewalks and parking lots slippery and dangerous. Temperatures are forecast to dip into the single digits F across the northern tier of the Northeast to the teens and lower 20s over much of the Ohio Valley and central Appalachians to the upper 20s along I-95.

From the snowy I-95 nightmare, a hero story emerged