A winter storm will plunge from the Midwest into the Southeast over the holiday weekend, threatening to create dangerous to impossible travel conditions and the potential for lengthy power outages.

A major winter storm, which on Saturday was spreading snow across the center of the country and the Tennessee Valley, is forecast to continue to move over the mid-Atlantic, bringing with it the prospect of wintry conditions and dangerously icy weekend travel.

The storm will charge in just over a week after two storms brought traffic-snarling snowfall to the Southeast. Cities like Nashville, which has already doubled its average snow total for the entire season with 7.9 inches this month, could have plenty more on the way.

With near- to slightly-above-normal temperatures in place ahead of the storm, precipitation in southern Tennessee into Mississippi, Alabama and northern Georgia is forecast to start out as rain. In Kentucky and central Tennessee, slightly colder air is in place, allowing for precipitation to start as a mix of rain and snow.

But as the winter storm arrived with a fresh wave of cold air, precipitation changed over to snow on Saturday afternoon in Little Rock, Arkansas, and on Sunday morning in Memphis, Tennessee. The same is forecast to occur in Knoxville and Chattanooga, Tennessee. 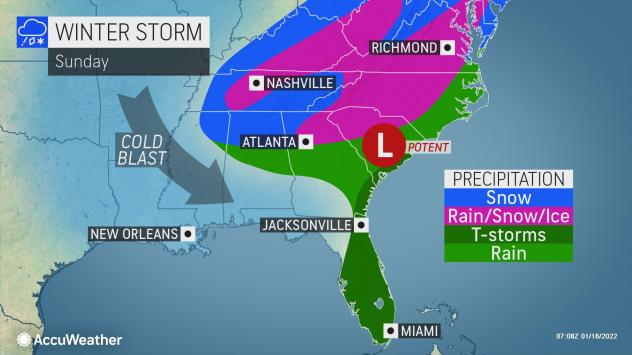 Across the Tennessee Valley, several inches of snow are expected before the storm winds down late Sunday, with the highest accumulations expected in northern Arkansas to south-central Kentucky and in the Appalachians where more than six inches of snow could fall. Meanwhile, Knoxville, Nashville and the northern suburbs of Memphis can expect 3-6 inches of snow.

The snow anticipated in this area is likely to bring deteriorating travel conditions on Sunday. Even a small amount of snow and/or ice on the roads can lead to dangerous travel from the US 70 corridor on northward to I-64.

"From Nashville on eastward, the majority of the snow accumulations will wait until Sunday," said AccuWeather Senior Meteorologist Courtney Travis.

From the Appalachian mountains eastward to the Atlantic Seaboard, the winter storm is not only expected to bring another helping of snow to parts of the southern Appalachians and mid-Atlantic, but also freezing rain. 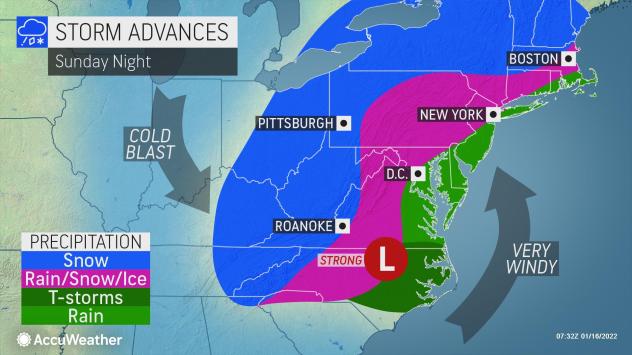 The majority of the snow will be confined to the higher elevations of extreme northeastern Georgia through the mountains of North Carolina and into western Virginia and West Virginia. Some areas can anticipate over a foot of snow through early Monday. However, snowflakes are forecast to extend as south and east as Atlanta, Fayetteville, North Carolina and Richmond, Virginia.

Atlanta hasn't recorded measurable snow for more than 1,450 days, the second-longest streak in the city's history, but that streak may end this weekend with the upcoming storm. Outside of the mountains, only an inch of snowfall is likely to fall over northern Georgia, but that's more than enough to make the roads slick as well as break the snowless streak, which would happen should more than 0.1 of an inch of snow and sleet accumulate.

Ahead of the storm, Georgia governor Brian Kemp declared a state of emergency. Icy conditions could impact parts of Atlanta and Georgia, causing the potential for power outages and road closures.

AccuWeather meteorologists warn that the more considerable concern for northern Georgia, as well as through the Carolinas and into central Virginia is the potential for a major ice storm. 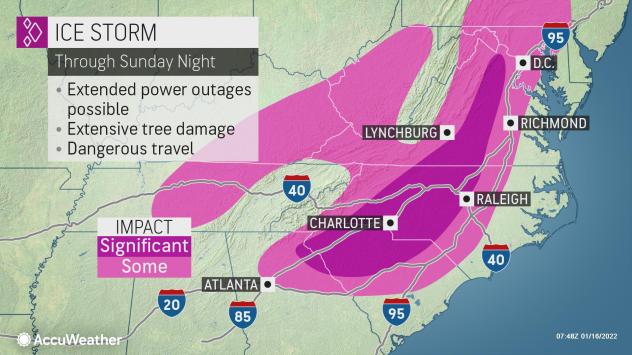 The greatest risk for considerable ice is in upstate South Carolina through western Piedmont of North Carolina. According to AccuWeather Chief Meteorologist Jonathan Porter these areas "could easily exceed half an inch of ice.”

From 1 to 3 inches of snow and sleet is forecast to fall on the Queen City, and when combined with a thick glaze of ice from freezing rain, travel may become dangerous to impossible on Sunday.

Other cities in the region are at risk for a significant build up of ice that may or may not be accompanied by accumulating snow. These include Atlanta; Greenville, Spartanburg and Columbia, South Carolina; Fayetteville; Winston-Salem and Raleigh, North Carolina, and Danville and Richmond, Virginia.

Extended power outages are possible in this region as tree limbs snap and power lines are weighed down by ice accumulation. People who live in this zone should prepare sooner rather than later for potential power outages that last at least into the start of next week.

“Should 0.50 of an inch to 1 inch of freezing rain accrue on trees and power lines in part of this zone, as feared, major infrastructure damage could occur and the power could be out for a week or more in some cases,” AccuWeather Senior Meteorologist Alex Sosnowski said, adding that a saving grace would be for more sleet or snow to fall rather than freezing rain. 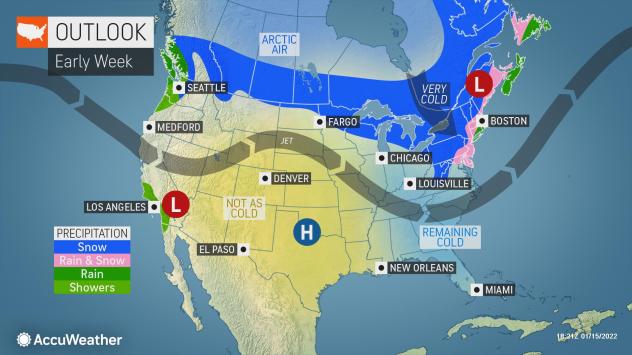 The last major, widespread ice storms to affect North Carolina occurred in February 2021, according to AccuWeather Senior Weather Editor Jesse Ferrell. Two ice storms hit the Tar Heel State within a week of each other, with the first hitting on Feb. 12-13 and knocking out power to 170,000 customers in the northern part of the state, and the second on Feb. 18-19, which coasted along the western and northern part of the state, cutting the lights for 26,000.

For the Charlotte, North Carolina, area and South Carolina, a widespread ice event hasn’t occurred since 2016. Freezing rain, mainly in the western half of the Carolinas, caused over 1,000 traffic accidents on Feb. 14-15, and was preceded by another deadly ice storm on Jan. 22-23 that knocked out power for nearly 180,000 customers across the two states.

After charging through the southeastern United States, this potent winter storm is forecast to go northeastward and impact the Northeast and New England through Monday night.

AccuWeather forecasters urge motorists to use extreme caution when traveling this weekend over the interior Southeast. Road conditions are likely to deteriorate quickly as the storm unleashes its wintry blast.

Atlanta and snowfall: A rocky history, to say the least

Jurassic 'discovery of a lifetime' unearthed in dried-up reservoir