This is the story of a rescue that took place amid driving snowfall and brutally cold temperatures -- and this unlikely tale of survival that began months ago will warm the hearts of all those who read it.

‘Russ’ has been reunited with his owner after being rescued from deep snow in California. He’s been on the run since the Caldor Fire sparked in August.

An incredible rescue took place in the wilderness of Lake Tahoe in December after a dog, missing since August, was saved by two women who had to snowshoe into the remote area and sled the freezing animal down the steep mountainside.

It all started on Dec. 16 when a man skiing in the backcountry of Twin Peaks in South Lake Tahoe came upon a dog trapped in deep snow and posted about the animal on Facebook.

According to a Facebook post on Tahoe PAWS, the dog "was in the snow, apparently unable to move, and was growling at the individuals who observed it. El Dorado County Animal Services Officer Kyle Shumaker was notified, but he was unable to access the area due to the 5-foot snow depth and steep terrain." 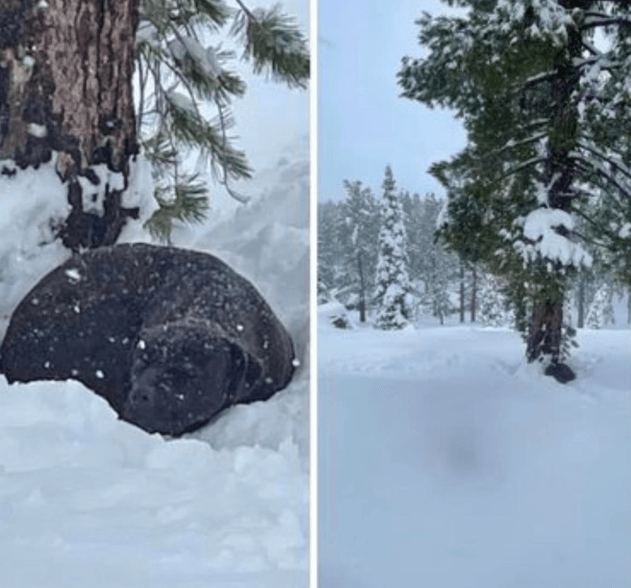 Russ, a pit bull-terrier mix was found by a backcountry skier, huddled under a tree, trapped in 5 feet of snow in the Lake Tahoe Wilderness. (Tahoepaws.org TLC 4 Furry Friends & Tahoe PAWS)

Wendy Jones is the founder and Executive Director of TLC 4 Furry Friends and Tahoe PAWS. The nonprofit specializes in searching for, rescuing and reuniting pets with their humans. As soon as she learned an animal needed help, she assembled a team of volunteers who immediately jumped into action.

Even though it was getting dark, animal trackers Leona Allen and Elsa Gaule strapped on snowshoes and began the trek up the steep terrain to where they had hoped they would find the dog.

"It was extremely cold. It was a night rescue, we had 5 feet of new, fresh snow that they were having to contend with to snowshoe uphill to get to where they thought the dog would be," Jones explained to AccuWeather National Reporter Bill Wadell. "Sure enough, when my rescuers got to the area, they saw a black clump in the snow that was not moving.

Allen, 61, told the San Francisco Chronicle that as she approached the animal -- a pit bull-terrier mix -- she feared the dog was dead. In addition to the heavy snow, temperatures in the Lake Tahoe area had bottomed out at 6 degrees on Dec. 16, and the low temperatures on the days before and after weren't much warmer, weather records show.

“I looked up in my headlamp and saw this dark blob in the snow under the tree well, and I thought, 'Oh my gosh, it’s the dog and he’s not alive anymore' ... And then he opened his eyes and I’m pretty sure I screamed. I’m pretty sure Elsa heard me down the mountain."

The women spent some time with the dog, earning his trust, before attempting to move him onto a sled they had dragged up the mountain. “I kind of petted him under the chin a little bit and he did that thing where a dog rests his head in your hand,” Gaule said.

"One of my rescuers sat on the sled and held the dog so he wouldn't fall or jump off and to keep him warm they wrapped him in down jackets, and it was a long trek down because it was such deep snow and the sled kept trying to fall over,so they were all very wet and cold when they got to the bottom," Wendy Jones told AccuWeather.

After a long two-hour trek back down the mountain by moonlight, the women handed the shivering dog over to animal services officers waiting at the base of the mountain. The dog was quickly rushed to a veterinarian who determined the cold and tired little guy was in good health.

It took some investigation, but they were able to locate a microchip in the dog and track down his owner who lives more than 400 miles south, in Riverside County. TLC 4 Furry Friends officials said that when contacted, "the owner was ecstatic to find out that his dog was alive.”

Turns out, Russ had gone missing back in August while his owner was out working on a traveling nursing job during the Caldor Fire. The owner reported Russ missing and put up flyers, but as the fire roared through the mountains toward South Lake Tahoe, the owner was forced to evacuate with thousands of others and leave without Russ. The pup endured smoke, the worst air quality in a decade and scorching heat for weeks. When winter arrived, powerful storms moved in with snow that was measured by the foot and it was assumed Russ was lost for good.

"If he could just tell the adventure he went on, that story would be amazing ... Little Russ was roaming the South Lake Tahoe area for four months, from August through December," Jones marveled, and quickly added that she isn't surprised. "Dogs are smart, dogs are strong, and dogs are survivalists ...They go into survival mode and find a safe place to hunker down and they find food and water and that's how they make it."

Russ and his owner were finally reunited the day after Christmas.

Wendy Jones is urging animal lovers to make sure their pets are microchipped and have ID tags on their collars. Elsa Gaule and Leona Allen are thrilled that they could play a role in bringing an animal home.

“As a rescue organization," Allen told the Chronicle, "this is what we’re supposed to do. I keep reliving the moment when he opened his eyes and lifted his head, and just the joy and elation inside of me was overwhelming. It’s one more life that gets to live happy and warm and safe.”

College students save dog buried under snow from avalanche
Snow was so deep, city had to dump it off bridges
Dog hailed a hero after leading police to hypothermic owner thrown from truck crash
Man tells harrowing story of his rescue from icy Lake Michigan after jumping in to save his puppy
Dog coats to keep your pup protected and warm this winter