A bomb cyclone delivered huge amounts of snow to the Sierra Nevada, closing schools for some students who started the year late due to wildfires.

Putting out Halloween decorations, buying candy and carving pumpkins are the usual tasks of late October, but that all looks different this year under the hefty dump of early-season snow in the western United States from the parade of storms that marched across the region from late last week into early this week.

The intense rain and dangerous flooding in burn scar areas of California have been devastating, and the snow-covered landscapes of high-elevation areas have been just as eye-popping and turned navigating roadways there into an "absolute nightmare" for a while.

AccuWeather's Bill Wadell reported that experts told him last week that the Sierra Nevada needed a good snowpack this winter to help the West get out of the long-lasting drought.

"Well, talk about a good start to the season," Wadell observed while reporting from Truckee, California, a small town in the northern part of the state about 30 miles across the Nevada border from Reno.

Across the California-Nevada border, the popular Mount Rose ski resort in Reno recorded a whopping 42 inches of snow. Throughout the region, multiple other ski areas also received multiple feet of snow, while many others dealt with more than an inch of rain. 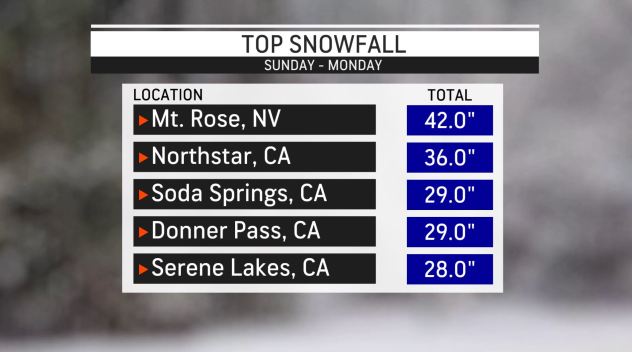 Such heavy precipitation isn't just atypical for October, it was, in many cases, record-breaking.

Along with being a potential first step in the drought-busting process, the heavy snow will also prove valuable to ski resorts.

Mammoth Mountain ski resort has picked up 41 inches of snow this month, making for the second-snowiest October in the resort's history. As a result, Mammoth Mountain is set to open for skiing and snowboarding on Friday.

A bomb cyclone delivered an early-season snowstorm to California ski resorts on Oct. 25.

According to KTLA, the abundance of early-season snow will allow, for just the 10th time in Mammoth's history, winter sports enthusiasts to partake in skiing and snowboarding during the month of October. Cameras positioned on the mountain captured glimpses of the wintry wonderland that awaits the visitors who will come later this week.

At Donner Summit, the UC Berkely Central Sierra Snow Lab reported on Tuesday that a new coating of 6.5 inches of snow raised the total October measurement to 47.7 inches, less than 2 inches shy of the all-time record. More than 33 inches of that total came from this recent storm system alone. 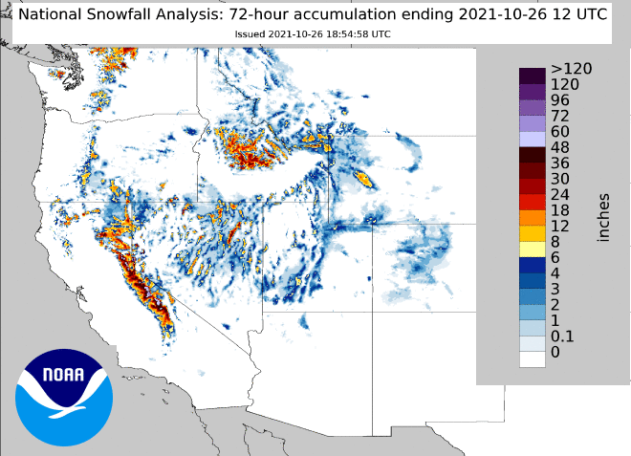 Meanwhile, the snow depth readings at government SNOTEL stations in the Lake Tahoe area showed record snow depths for October 26 at 10 of 17 reporting stations, most of which have been in service for 30 years. At Independence Lake, the station had never recorded a snow depth as high as the 39 inches recorded Tuesday morning.

So much snow fell that it could easily be seen from space.

Off the mountain, that snow was no wonderland on the roads.

Back in Truckee, Wadell reported that traffic "was an absolute nightmare," from the heavy snow. Behind him, as he reported, CalTransit stopped big rigs to check for snow chains on tires, a more-than-needed component for safely driving through the wintry conditions. Vehicles throughout the region have needed all the help they can get.

Drone footage from Live Storm Media's Brandon Clement showed a seemingly never-ending line of semi-trucks stranded along the side of a highway in nearby Verdi, Nevada. 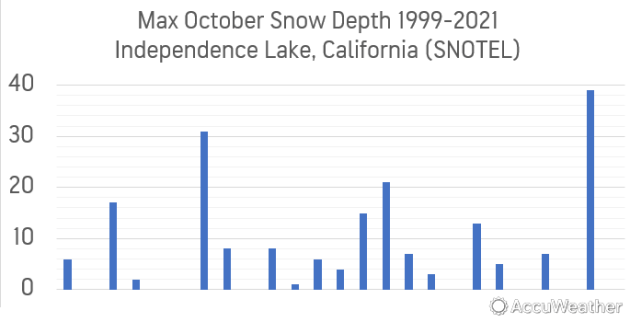 Wadell also reported that the travel logistics and power outages caused by the snow forced some schools to cancel classes on Monday. The snow day comes just a couple of months after many of those same schools started classes late due to the active wildfire season.

However, some residents are also seeing the silver lining of the storm's wrath.

After a decade of disastrous wildfire seasons, the early-season precipitation dump has effectively snuffed out any likelihood of the blazes returning.

"I'm really glad to see it after the wildfire season we had and living in the fear of wildland fire all summer," Alicen Navarro of South Lake Tahoe told Wadell. "That's every year, but this year felt extremely intense. So this extreme weather after that is good to see."