Supernatural forces at play? Tampa Bay has dodged a direct hurricane hit for a century

It’s one of the most populated areas on Florida’s Gulf Coast, but hasn’t had a direct hit from a landfalling hurricane in 100 years. And next week, forecasters are predicting yet another one within striking distance.

Is the supernatural protecting Tampa Bay from hurricanes?

A myth has grown over the last century that Native American mounds are protecting the Tampa Bay area from major hurricanes. The last direct strike was in 1921.

For a century, the Tampa Bay area in Florida has been largely void of any direct landfalling hurricane strikes -- and some locals believe the reason can be chalked up to a supernatural force.

The most recent near-miss occurred in August 2021 when Tropical Storm Fred came within 195 miles of Tampa. The previous year, a much-weakened Tropical Storm Eta made landfall about 130 miles north of Tampa in November 2020.

“That has been our story for nearly a hundred years now," Rui Farias, executive director of the St. Petersburg Museum of History, told AccuWeather. "That the hurricanes are heading right for us and just veer off course.”

For centuries, the Tocobaga tribe inhabited the coastline of Tampa Bay, surviving on a diet consisting mostly of fish and shellfish. The tribe began dying off due to war and disease brought by a Spanish explorer and his men in the 16th century. Although the timeline is somewhat unclear, the tribe had been completely wiped out some time before 1800.

Large burial mounds remaining from Tocobaga civilization are still present today, with the oldest one located overlooking Old Tampa Bay. However, only a few have survived the development the area has undergone in modern times. Many people think the mounds could be providing supernatural protection from hurricanes.

Technically, Irma did make a direct hit on part of Tampa in 2017, though it was a bit of a glancing blow from a weakened hurricane. "The storm did weaken to a Cat 1 while making its closest approach to the Tampa area," AccuWeather's Chief Hurricane Expert Dan Kottlowski said, referring to the storm's Category 1 strength, which had dropped considerably from its Category 5 intensity by that point. "But it was still a hurricane and caused lots of damage." 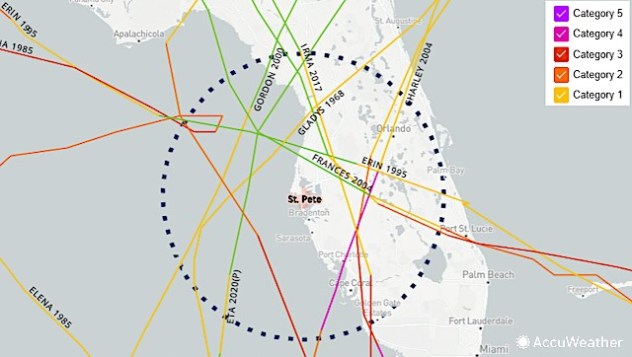 This map shows hurricanes that have passed with 100 miles of St. Petersburg, Florida since 1960.

Kottlowski explained that Irma "was a Cat 1 when it passed just east of downtown Tampa with a tropical-storm-force wind field of over 300 miles. This large wind field is what caused all the power outages and damage."

Kottlowski said a direct hit occurs when a hurricane "passes to within a distance equal to the cyclone's radius of maximum wind," which for Hurricane Irma at that stage was 23 miles. "The Tampa International Airport is 25 miles [from where Irma's center was] but the eastern part of the city extends well over 20 miles to the east," Kottlowski explained. "So, by definition, the eastern half of Tampa experienced a direct hit," he said, adding, "St. Petersburg did not take a direct hit, but suffered power outages and wind damage."

But it wasn't a catastrophic hit, and thus belief in something otherworldy protecting the area from a hurricane's worst wrath persists.

"Do they want to protect their burial mounds," Farias wondered in the interview. "Or would they let a hurricane hit to get even with the Spanish and the white settlers that moved down from the north and took their land?" 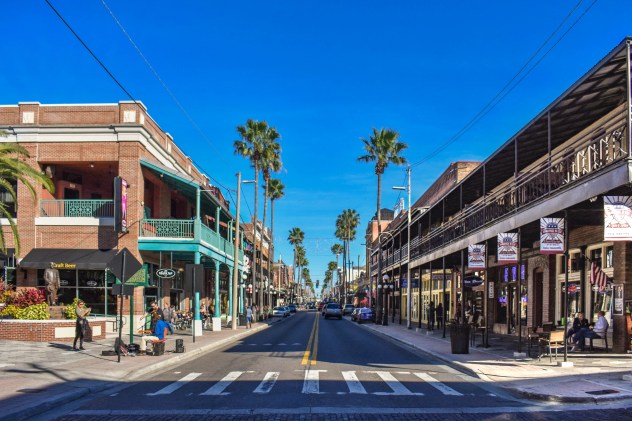 Similar to Irma, 2004's Hurricane Charley left many in the area relieved when it navigated away from Tampa Bay as it roared toward land.

"That just added huge credibility to this myth," Farias said. "Every spaghetti line had the thing going into St. Petersburg. We were all prepared for the worst and in the last second it turned."

"Spaghetti plots" are collections of potential forecast tracks for tropical storms based on slightly different possible weather conditions. They can come from a group of models or one ensemble model that creates multiple possible storm tracks.

"When you plot all the possible tracks of storms from these forecast models, it can look like spaghetti if the forecast goes out too far ... hence the name "spaghetti plots," AccuWeather Senior Meteorologist Jesse Ferrell said. "Their value, however, is that, in the short term, they usually show a 'path' of likely tracks for tropical storms, giving residents of those areas within the path more time to prepare."

In 1848, one-third of the famous mound was washed away by a hurricane. It also once saved the life of an early settler after bringing his family to the bay to escape a storm surge.

The last time Tampa Bay sustained a direct hit by a hurricane was in October 1921, a full century ago, before hurricanes were given names. The NWS describes the hurricane as "the forgotten nightmare." The storm caused at least eight fatalities and mass destruction to the area.

"Could it be people from the past protecting the present?" We asked.

"A lot of people say it's the Indian mounds," Farias replied. "But I don't know."

But the legend grows each year that goes by without a destructive storm battering the Tampa Bay area.

"I like to believe those things are true," Farias mused. "I love that story."

Kottlowski cautions that the Tampa Bay area is "long overdue for a landfall," but he attributes the region's location and the history of tracks that storms take as the reason the area has escaped the worst throughout the years.

"In order for Tampa to get a direct landfall, the storm has to hit them from the southwest," Kottlowski said. "This is a very rare track for a hurricane. Most storms move south to north and south of Tampa is Marco Island," which is where Irma made landfall.